A new 36,000 square foot arts hub is coming to the area dubbed the West Queen West Triangle — and longstanding community group Active 18 has their fingerprints all over the project. To be built at the bottom of the still-under-construction Edge condo at Queen and Lisgar, future tenants of the space already include Gallery TPW, the Toronto Media Arts Cluster (TMAC), Interaccess, Le Labo, the Canadian Film Distribution Centre, Charles Street Video, the Toronto Animated Images Society, and the Images Festival.

Although a firm opening date remains elusive, the target is fall late 2013. At present, the development that will house the hub is little more than a foundation. When complete, the space will occupy the second and third floors of the condo.

The news represents a significant accomplishment for Active 18, who's fought to retain the artistic character of the area in the wake of the condo boom that's taken place over the last five years. While they were ultimately unable to prevent the demolition of 48 Abell — the crusade for which the group is best known — this is much more than a consolation prize. 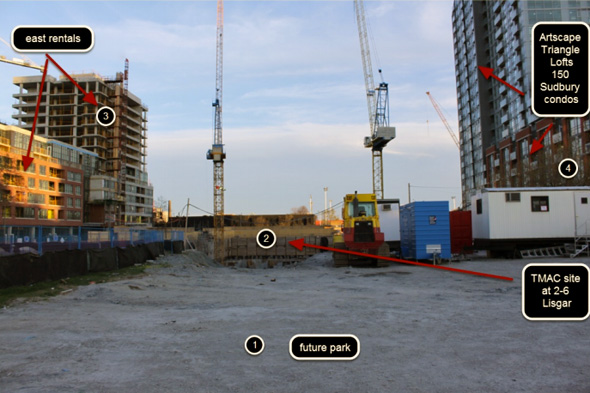 Along with the Artscape Triangle Lofts, which occupy the first three floors of Urbancorp's 150 Sudbury development (a.k.a. The Westside Lofts), the new space should ensure that the arts remain a vibrant element in the community from both a residential and commercial standpoint (i.e. galleries, cinema space, arts organizations).

The cost of the arts hub is currently pegged at $12 million. According to a press release, "the space will be built out by the developer and 'purchased' by TMAC subject only to a $3M take back mortgage." The key to the deal is that Urbancorp was granted the zoning rights to build its Edge and Epic condos to a greater height in exchange for the art space.

Choosing not to dwell on the past, Active 18 characterizes this development as a "happy beginning." It's hard to argue against the idea that this will serve as an excellent addition to a neighbourhood that, with the exception of 99 Sudbury, lacks for cultural life south of Queen Street. And, as far as trade-offs go, the additional height is unlikely to change the character of an area that's already thoroughly defined by tall towers. 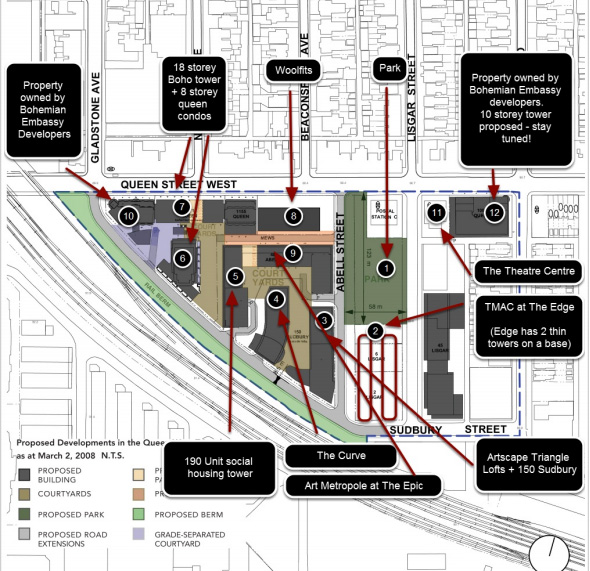