Tomboyfriend close Williamson's residency at the AGO

After almost two months as the Art Gallery of Ontario's artist-in-residence, Margaux Williamson's tenure drew to close on Saturday with a video premiere and live performance from local art-rock collective Tomboyfriend.

Following Paul Butler as only the second artist to be granted free reign of the gallery, Margaux's past events have included a marathon viewing party for a reality-TV art competition, a panel discussion on sex entitled "I'M A VERY SEXY BABY," and free weekly sessions offered to the public on "how to act in real life." Clearly, she's relished in her opportunity to stretch the boundaries of traditional AGO programming. Margaux has also frequently included old friends and previous collaborators in her gallery events, and Tomboyfriend's lead singer Ryan Kamstra can be counted among both.

The closing celebration drew a rather calm but attentive crowd to the AGO's Dr. Anne Tannenbaum Gallery School, a large space recently renovated to accommodate the artist-in-residence programs. After a short speech and some minor technical difficulties, Margaux begun the evening with a screening of her video for the band's song End of Poverty. Composed entirely of low-quality found YouTube clips, the video is an uncomfortable, hilarious, and ultimately heartwarming compilation of teenagers dancing alone in their bedrooms and bathrooms, all of whom receive a credit at the video's end.

The musical portion of the night got off to an odd start, as pianist Sholem Krishtalka opened the set with a loungey, warbling cover of Lana Del Rey's Video Games. It was hard to tell whether the tribute was meant as a tie-in to the "Youtube celebrity" theme of the "End of Poverty" video, or whether Sholem is just an unabashed fan of Del Rey's "ghetto Nancy Sinatra" shtick. 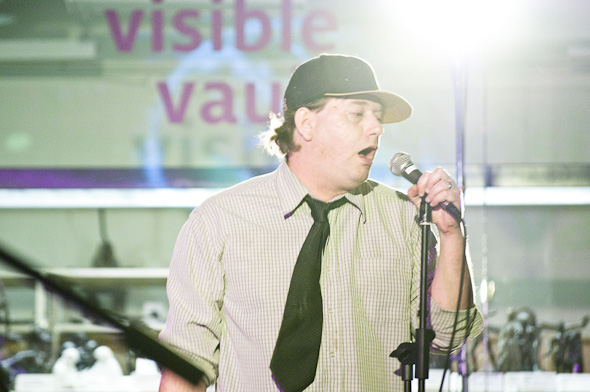 But the shaky intro was quickly forgotten once all nine members of Tomboyfriend took to the makeshift stage. The band's lengthy alt-rock anthems sound like a Broadway musical written by the Pixies, and their combined energy was enough to fill the massive lobby. Various combinations of the group were assembled during the forty-minute set, and the song choices were delightfully eclectic. The Panic was a rowdy, Arcade Fire-esque stomper, while Lovesickness a more mournful ode dedicated to prolific artist Shary Boyle, who arrived late to the show.

An announcement has yet to be made about the AGO's next choice for their artist-in-residence, but hopefully they'll take a few cues from Margaux's inventive programming. That, or find some similarly talented friends. 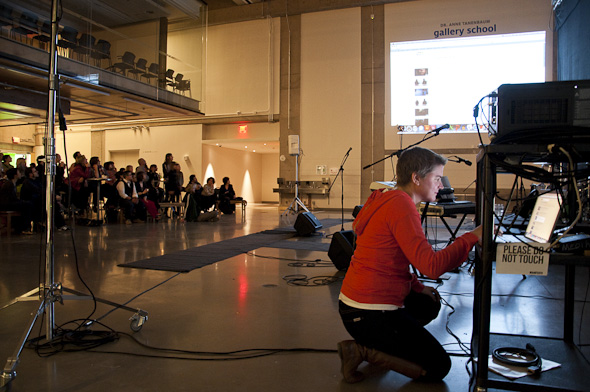