New exhibit tracks the rich history of cinema in Toronto

Following the critical and commercial success of throwback films such as Hugo and The Artist, it seems to be a pretty appropriate time to delve into Toronto's own cinematic history. In an exhibit associated with the Images Festival, Toronto: Cinema City focuses on the GTA's fascinating relationship with film. From Yonge Street grindhouses to the Junction's grand movie palaces, Curator and Eric Veillette has put together an exhibition that chronicles the major events and major losses of Toronto's cinematic past.

The inspiration for the exhibit, as well as the display's centrepiece, is the map that Veillette co-created with Ryerson's Paul Moore. An astounding number of past and present cinemas are charted on a map of Toronto, with the downtown stretch of Yonge Street showing a near-constant stream of dots. While the vast majority of these cinemas have since closed, their previous buildings are often still intact. "There's so much history to be discovered if you just look up," says Veillette. 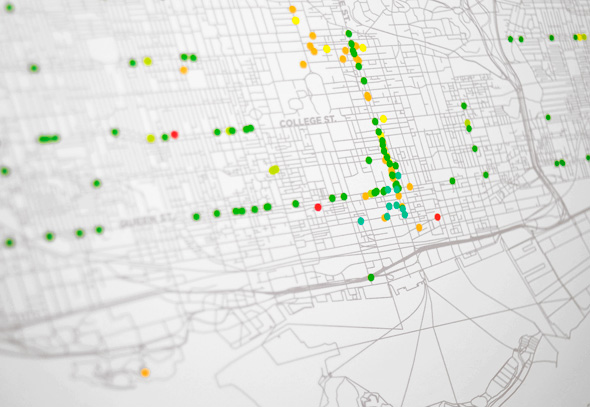 The exhibit makes clear that the effect local cinemas have on communities extends far beyond the movies they show. Toronto's theatres have previously housed unions and labour rallies, acting as meeting points "much like church basements," as Veillete explains. Even today, with activities ranging from lectures to burlesque shows, "they are still used for purposes other than showing movies." Likewise, a wonderful segment focuses on Toronto's ethnic cinemas, which included Italian, Indian, and Tamil theatres. Roncesvalles' non-profit Revue Cinema was previously a German theatre that catered to the area's large immigrant population. "Anybody who was coming from there, to suddenly be able to access these films and this attachment to their own culture must have been a very important experience." 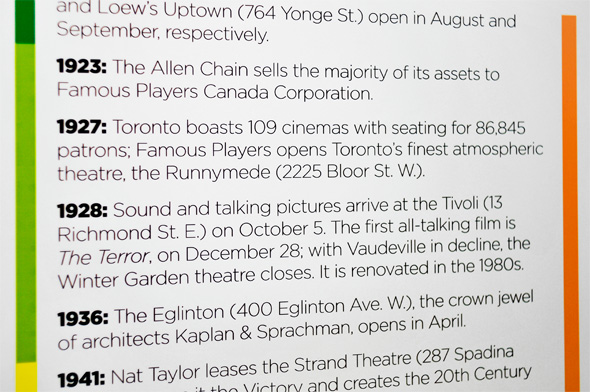 As Veillette tells it, Toronto's international cinematic reputation is quite the mixed bag. While we can now lay claim to the boundary-pushing films of Atom Egoyan and David Cronenberg, Toronto was always not always such a hotbed for daring cinema. "I was in Italy for a silent film festival," he says, "and everyone knew about Ontario for its weird Draconian standards." From 1934 to 1974, O. J. Silverthorne single-handedly ran the Ontario Censor Board, using only his own judgement to guide his mandate. Likewise, the 80's ushered in the reign of the infamous Mary Brown, whose moralistic outlook led to major cuts in the films that were shown throughout Toronto. "In film circles, even in the states, a Mary Brown print is known as something that's been censored." 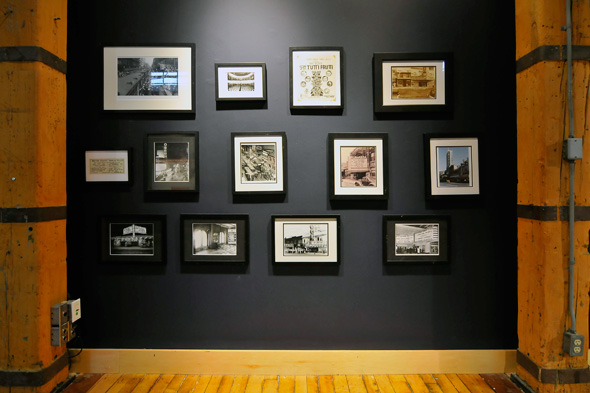 After weathering the inventions of VHS and DVD, the city experienced another decline in local cinema in 2007. "When I returned to Toronto, Festival Cinemas had closed, the Bloor was sort of on autopilot...the Revue's marquee had crashed down...It was a terrible time for movie-going in Toronto." Film buffs were forced to get crafty, taking their screenings underground in events like the experimental film series at the Gladstone Hotel. In a similar manner, Cinema City avoids easy appeals to nostalgia for the movie palaces of Cinema's Golden Age, and asks its viewers to redefine what they consider a theatre. "In the last few years we've seen people doing screenings in rooftops and alleyways." 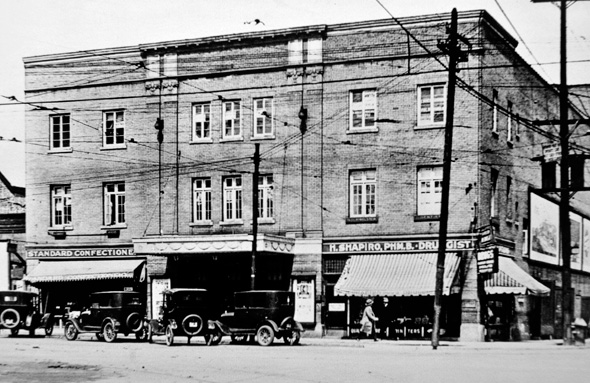 Ultimately, the greatest testaments to the importance of local cinema are the stories. The exhibit provides anecdotes from several prominent Torontonians, who gleefully share their memories of favorite showings. Counselor Adam Vaughan even contributes a story from his time as an usher, during which he was forced to don a powder-blue tuxedo. As Veillette says, "there are no shortages of memories and oral histories...everyone has a story." 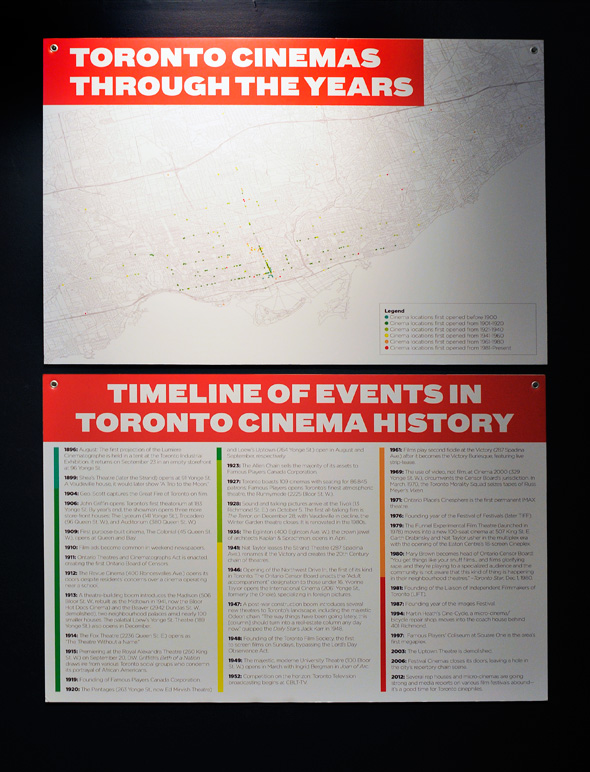