Will the arrival of HomeSense revive 80 Spadina?

The cynical, anti-conglomerate's first response would be "no." That is, the opening of a national chain decor store selling cookie-cutter prints of tired bloodhounds will do nothing to breathe new life into a venerable gallery hub with an aging reputation. In fact, it might do the opposite; cheapen a landscape that was once exclusively about independent art and design.

But when I went to 80 Spadina to talk to gallery owners about the soon-to-open street-level HomeSense, the response I got was overwhelmingly positive. Granted, there are those who are less-than thrilled to have "Saving is Believing" as the building's 'hello,' but the owners I spoke with were optimistic about what the impending arrival may bring to 80 Spadina.

The building was once known as one of Toronto's thriving marketplaces for contemporary art and photography — and perhaps it still is, though arguably only to those in the know. While it was once brimming with independent galleries 15 to 20 years ago, the number has whittled to nearly half in the years since (largely due to shifting demographics and the economic downtown) and some of the art focus at 80 Spadina, it seems, has been lost.

"Art at 80 used to mean something," Amanda Moore, owner of Moore Gallery tells me as we chat in her expansive gallery. The abundance of space, I keep hearing over and over, is what attracted so many gallery owners to the building in the first place. "Years ago, 'Art at 80' was a really big brand." Moore Gallery has been in the building about 15 years, and Amanda has been at the helm for the last eight. In that time she says she has seen the building's focus shift, as galleries move on and management tries finds new occupants to fill the empty spaces. "In that way, [Art at 80] sort of fell to the wayside."

The eroded art focus wasn't helped by the long vacant retail space on 80 Spadina's ground floor, which housed an Addmore Furniture years ago but has been empty for the last few. "It was sort of depressing," Indira Choudhury of Trias Gallery tells me. "There was paper on the window for a long time — it wasn't very inviting." Trias Gallery is another 80 Spadina veteran, now in its 14th year in the building. "You have to look at it as a positive," Indira says when I ask her about the new HomeSense. "You know it will bring people in. We are both dealing with a visual medium, and we are hopeful there will be some crossover." 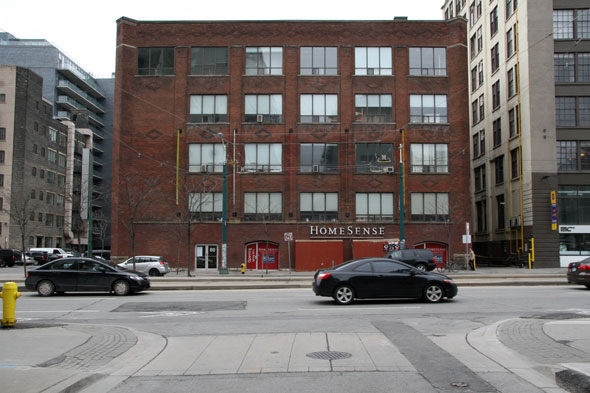 The hope is also that the HomeSense will help to attract a new, younger demographic that might not have known about the upstairs galleries. That's how Marianne Katzman of Katzman Kamen Gallery is looking at the national arrival. She says the building's management has been trying to find the right tenant for while — nixing the idea or food and unrelated retail — and decided, in the end, that HomeSense would be the best fit.

The galleries at 80 Spadina have been collaborating in the last few months, and their branding relaunch will likely coincide with the HomeSense opening in the spring. The galleries are planning to introduce new logos, more exterior signage, a renovated lobby, and joint advertising — and as far as I know, nothing to do with tired bloodhounds.