Over a year has passed since the venerable Dufferin jog passed into history with the opening of a new underpass connecting Dufferin Street to itself on either side of Queen Street West. The novelty of bypassing Gladstone Avenue might have worn off by now, but the tunnel itself still seems austere, lined as it is with two rows of conspicuously blank insets in the concrete that were supposed to house artwork.

Toronto artist Luis Jacob won the city-sponsored public competition to decorate the walls of the underpass in May of 2009, but so far nothing has appeared, leading locals and art scene regulars to wonder what happened to the project. Jacob's name had certainly been in the news in the meantime — the Peruvian-born Parkdale native has opened shows in Montreal, New York and Europe, which have increased his international reputation considerably. 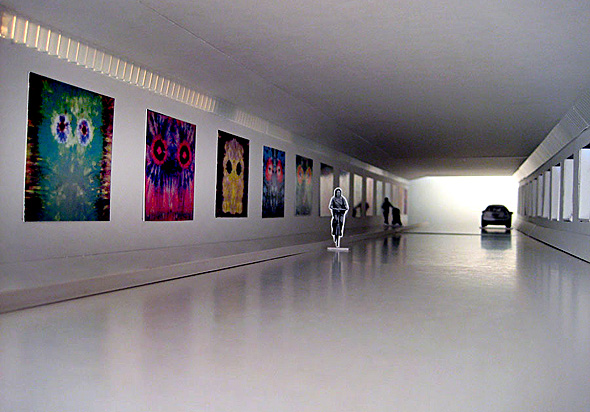 Jacob's artwork — a series of vividly-coloured panels reminiscent of psychedelic tie-dye art — was titled "Community Spirits" when his winning entry was announced nearly three years ago, but seems to have changed to "They Sleep With One Eye Open" when Jacob was profiled in the Toronto Star just over a year later. After calls to his brother's studio went unanswered — Marco Jacob is an architect and designer who helped him fabricate the maquette for his competition entry — I was finally able to talk to Jacob after inquiring at City Hall.

The artist, who was also briefly a member of local indie stars the Hidden Cameras, said that issues with constructing the panels had held up installation of the work.

"It's a huge project," Jacob said, "and because it's a permanent piece of public art, there's a lot to consider, because it has to look good, but it also has to withstand the elements and everything else, so there's been a lot of design work and finally the fabrication."

While the artwork will be sheltered from rain and snow, they still had to contend with the salt and water spray from cars potentially attacking the work.

"I knew it had to be a metal structure, durable materials. We're using powder-coated aluminum for some of the material, so that's going to protect it from corrosion. Anything that you build that's a permanent part of the city, even if it's an artwork, it has to be durable, so these kinds of things are a consideration." 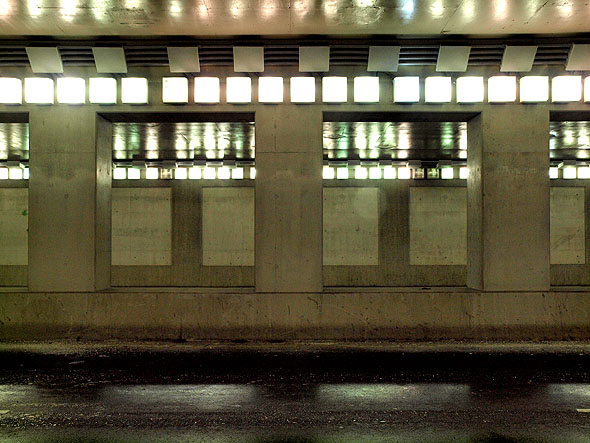 Jacob says that the city had been very cooperative with his project, both with relevant by-laws and construction.

"The by-laws are more in terms of safety, and I work with an engineer who has to sign off on all of our design proposals, and the city also has a lot of experience in doing construction and public artworks, so I get a lot of input from them and run everything by them so people with their expertise can approve the project."

The fabrication is essentially finished, Jacob told me, but they've delayed installing the panels for one simple reason: winter.

"For installation we'll have to be outside for two weeks, maybe even three weeks, and working when it's cold — it's brutal. It's just not possible," the artist explained. "It's a huge project, so there's a lot to work on and to consider, so I feel that it's going to be a welcome addition once we install in the spring."