What We Talk About is a new monthly lecture series that combines the joy of learning with the pleasures of alcohol. On Thursday night, over 40 curious-minded Torontonians gathered at No One Writes to the Colonel to listen to a group of informed and engaging speakers and enjoy a couple pints in the process.

Led by Alicia Merchant and Peter Merriman, each installment of What We Talk About has a theme and features experts from a variety of disciplines. The inaugural event's (very appropriate) theme was "Firsts" — the first carbon neutral neighbourhood, the first novel by Judy Blume, and the first slasher movie. There was a little something for everyone.

Both Merriman and Merchant have experience running intimate and intelligent cultural events. Merchant ran the storytelling series MothUp that has recently been revamped as The Raconteurs, and Merriman has started a couple bookclubs and is the host of Citation Needed trivia. Though both organizers have their hands full with these other popular and challenging projects, they launched What We Talk About because they knew there was an audience for it.

"A lot of our friends are out of school now, and so there's a lot of people who miss that exercise of the brain," says Merriman. "It's a casual, fun way to learn stuff." Nostalgia for the classroom — I bet few people would've predicted such a development when they were skipping class with a hangover.

Merriman and Merchant are careful to keep the lectures from getting too academic, though. "We don't want grad school words being used in the lecture, but we want it to be educational," says Merriman. "It's easily digestible," adds Merchant. "You're learning without committing yourself to a whole class." And don't forget, there's beer. How many grad seminars can say the same? 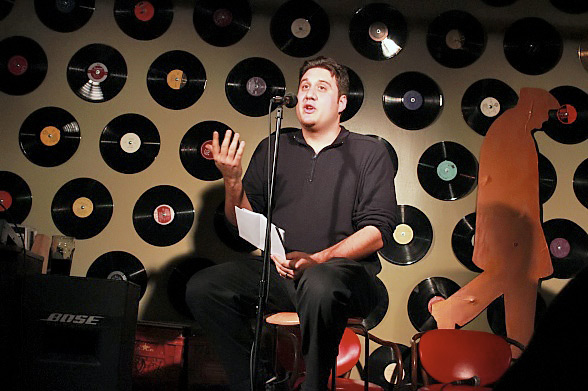 Each speaker brought something different to the table. The most researched and informative lecture on the panel came from film critic Adam Nayman who spoke about Bob Clark's Black Christmas, the first incantation of the modern slasher movie. Nayman has a rare ability to distill many, many ideas into very few words in a way that is clear and entertaining. Even during the round table Q&A when he didn't have notes to prompt him, his sentences sounded as though they'd already been written down and edited.

The more eco-conscious speaker was Julie Dzerowicz, co-founder of Project Neutral, an organization that's working to develop the first carbon neutral neighbourhood in Toronto. Though in the early stages, they've secured funding and have decided to focus first on the Junction and Riverdale neighbourhoods.

The goal for both Merriman and Merchant is to build a really well-curated lecture series with speakers who compliment each other and fit comfortably under the umbrella theme. Alas, there is some work to do. By the time the round table Q&A rolled around, it became more obvious that the speakers had some trouble finding common ground under the theme of "Firsts." So there are some kinks to work out, sure — but Merchant and Merriman are both excited about the February lectures that will focus on the theme of "Love Triangles." With a topic like that, it's bound to be a crowd pleaser.