Mapping the unmappable history of Toronto

"This river I step in is not the river I stand in." That line will likely ring familiar to most Toronto folk who've crossed the Queen Street Viaduct heading east across the Don River. Added to the structure by Eldon Garnet during a renovation effort in the mid-1990s, its thoroughly Heraclitean sentiment is a little reminder of the flux that surrounds us regardless of whatever efforts we might make to suppress the passage of time. It also happens to sum up one of the dominant ideas that Toronto artist Flavio Trevisan explores in his latest show, "Museum of the Represented City." 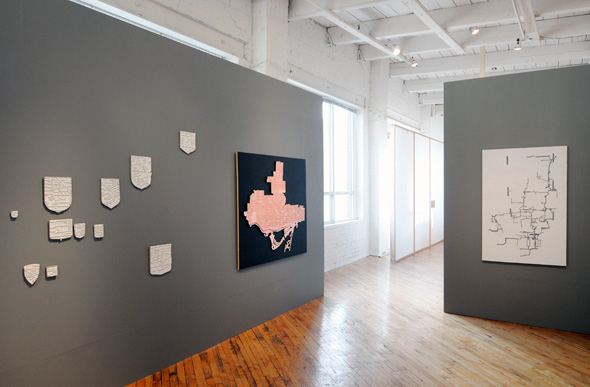 Presented as museum of unconventional maps, the exhibit dramatizes the degree to which cities tend to elude the various cartographic efforts made to capture them. "Maps are out of date as soon as they are made," reads an accompanying note to one of the show's "pieces," which asks viewers to gaze out the window at 80 Spadina Avenue and compare the landscape below to the one depicted on an adjacent Google Satellite map (the imagery on which would likely derive from 2009 or earlier). 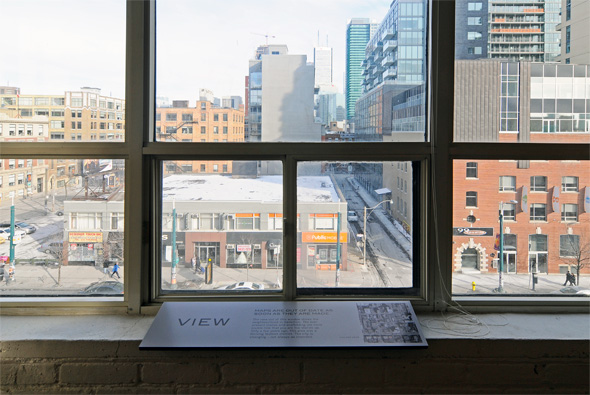 The exercise, in effect, turns the city into a living diorama — a savvy reference to the show's underlying argument that the act of representation tends to obscure as much as it reveals. As traditionally understood, maps are secondary documents, passive records of landscapes and built environments that experience constant change. Their ability to represent the subject matter at hand is limited in the same manner that words necessarily come up short at the task of representing the diversity and complexity of the things they describe. 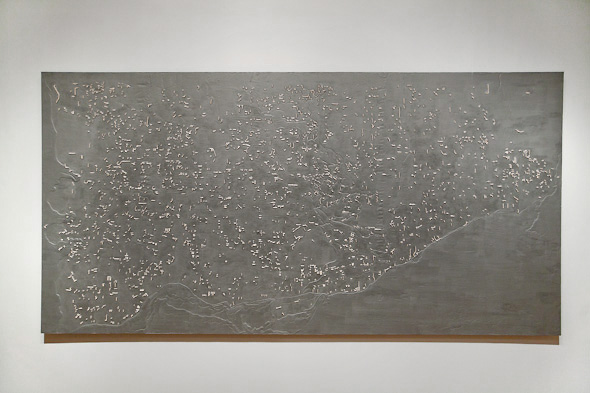 This is not an original observation — of course cities are about more than what can be put on a map — but the wonder in Trevisan's work lies in the way that he unveils this putatively simple fact and, in so doing, turns it on its head. Last year's "Studies of a New Past" already played with the notion that maps exceed their referential function, but this latest collection pursues the argument with greater force and sophistication.

Take, for example, the final map in the show, "A City of Dead Ends." A deceptively simple work, by eliminating the city's through streets, it exposes just how inappropriate it is to refer to the streetscape as grid. More than that, it presents Toronto in a thoroughly unfamiliar manner, one which should seduce the viewer into a deeper consideration of our built environment and the way that it's taken shape over time. 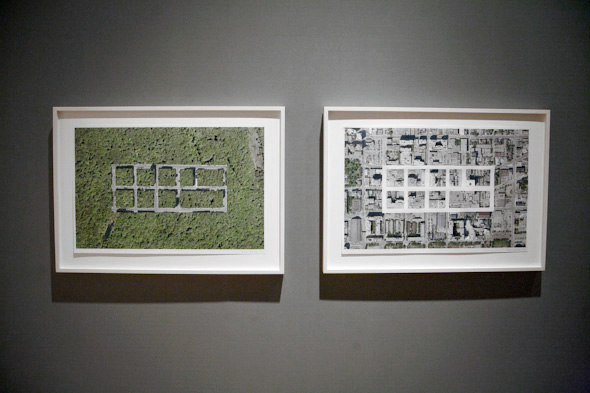 In an attentive bit of curation, the obvious companion piece is the show's other bookend, "10 Square Blocks," a diptych that highlights the more rigidly governed beginnings of Toronto's street pattern in the grid that still remains just to the east of the St. Lawrence Market. "Things do not always turn out as planned," Trevisan writes. "The shape of the city as we know it today represents its history unfolding in time and space." 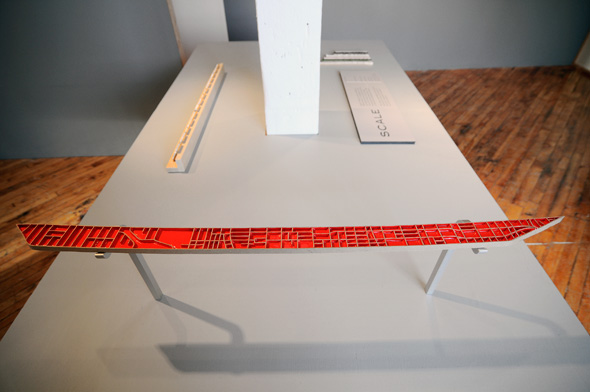 All of the pieces in the show work to establish this observation in some capacity or another, whether it be the knife-like map that tracks the area between King and Queen streets, the tiny snippets of the city that are cut out and made to spell "representation," or the aerial view of the Toronto Islands that draws attention to the dueling processes of erosion and development that have given the former peninsula its current shape. 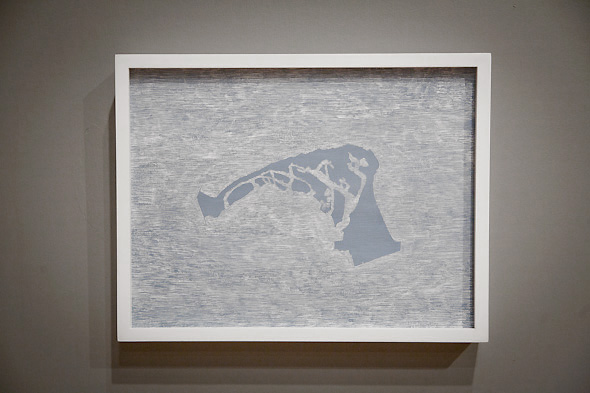 These maps aren't mere imitations of a Toronto that exists prior to and outside of them, but a set of documents that serves to remind viewers that our conception of the place in which we live is born of our efforts to chart it. Although static in a superficial sense, Trevisan's work is thus better understood as a portal to a different way of understanding the city — as a place that's neither fixed in time nor space, the state of which could be best described as becoming. 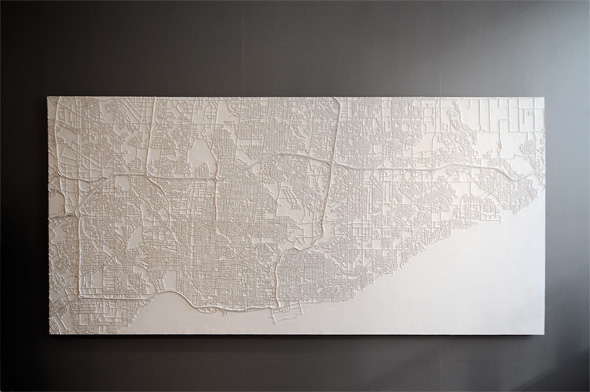 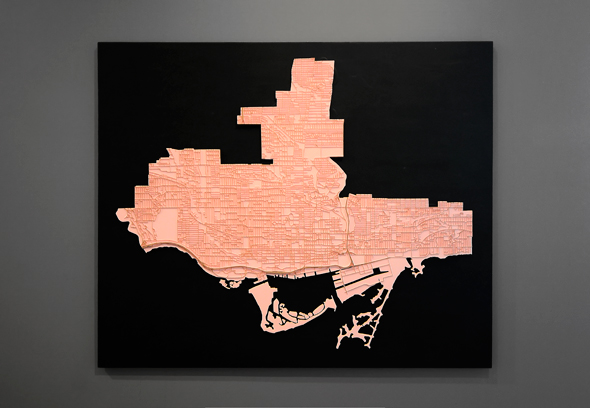 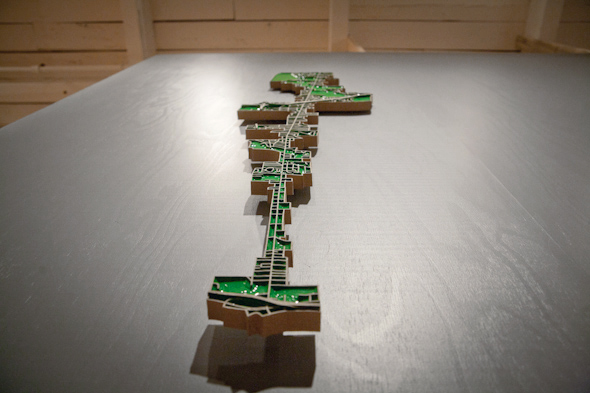 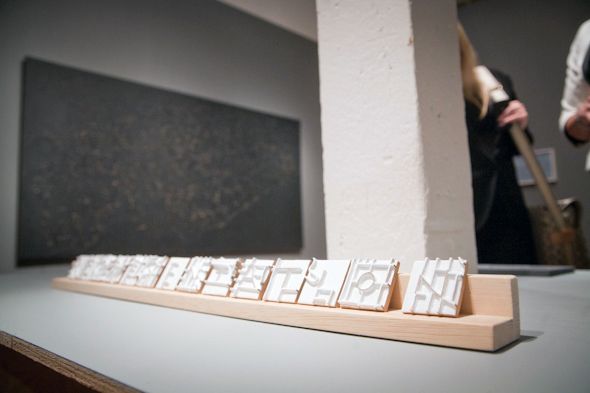 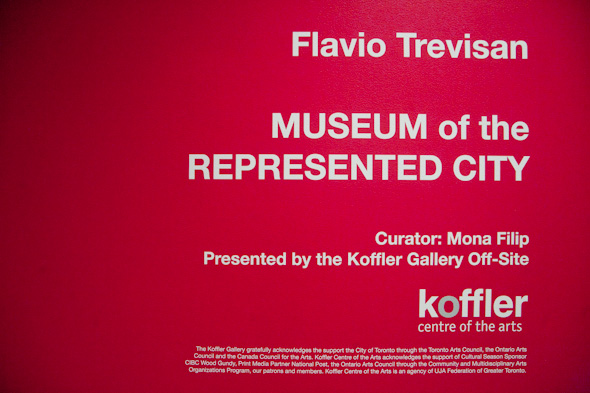 Flavio Trevisan's "Museum of the Represented City runs until April 8, 2012 at Koffler Off-Site. Admission is free.

Photos by Jesse Milns and the author