The Occupy movement lives on in new art exhibit

Joel Richardson, a Toronto based artist and filmmaker, has garnered a lot of attention of late. His work was featured in a major exhibit for Occupy Wall Street at the Chelsea Museum, which was picked up by the New York Times and the Washington Post, the latter of which called his contribution some of "the most controversial art" to be featured. On a local level, the artist also made headlines earlier this year, when the City of Toronto buffed one of his murals near Lansdowne and Dupont when it was later revealed that the project had received funding from the Clean and Beautiful secretariat. Richardson has since replaced the mural, and is experiencing what you might call a mid-career resurgence.

So it's no surprise that Suitman, Richardson's new exhibit at OZ Studios on received a warm welcome at its opening reception Thursday night, with local filmmakers like Bruce LaBruce, Sook-Yin Lee, and cast members and producers from Skins among the many who came out for the show. 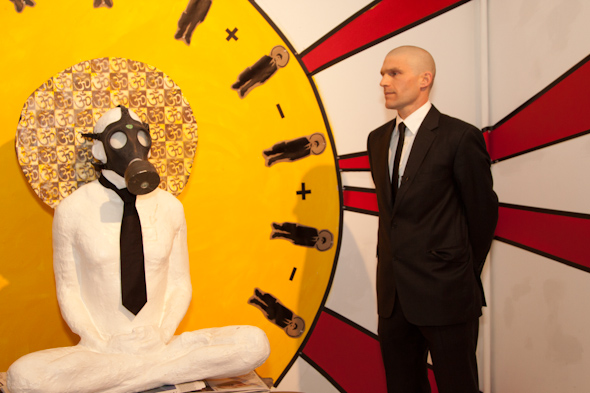 Richardson says the idea for the Suitman project was born after the mural on Dupont Street was taken down. He had already established a distinct aesthetic, but the idea evolved when the Occupy movements got underway. The artist describes the "suitman" as a "human element in the equation of finance."

Given the economic and political turmoil of the last few years, Richardson's work looks to explore what you might call the class wars. Featured in the exhibit is his latest stencil, inspired by Tommie Smith's Mexico City Olympic Black Power salute from 1968 and drawn in life-size on three doors, it represents a "grassroots financial revolutionary." Barefoot with his fist raised in the air, this "suitman" merges the protester with the executive to show that there can be a balance between these two poles. 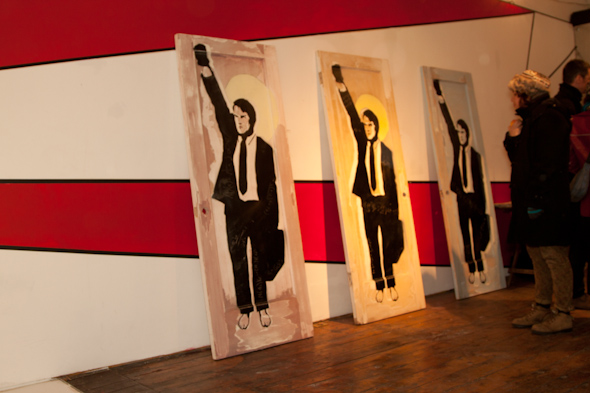 "I was always taken by the strength and bravery it took for Tommie Smith and John Carlos to stand on the Olympic podium in 1968 and raise their black-gloved fists in the air. In the words of John Carlos, 'That's what that fist meant, unification in terms of saying we can set an example and make this better for all society.' It was a humanitarian issue, it's not a power issue." 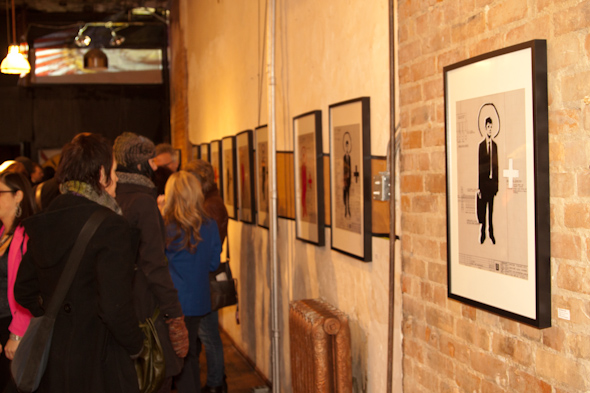 The highlight of the exhibit is most certainly the Zen "suitman." He's the first thing you see when you enter the small gallery, taking up the entire back wall. Sitting on top of three televisions in a meditative pose, he wears only a tie with a gas mask showcasing the rioter and businessman becoming one person. Accompanied by a mural of equations , a yellow halo glorifies the merger of these two personalities. Newsprint and bold red lines reach out from behind the halo meeting all other stencils featured in the exhibit, connecting and unifying all of the suitmen as well as the viewers of the exhibit.

What does Richardson hope to instill with his merger of two seemingly disparate entities? "The barefooted suitman with his fist in the air is a call for working people and our leaders, regardless of race, sex or religion, to act with similar bravery, and solidarity and to stand up to the massive and corrupt economic in-equalities and to make the world a better place."

Suitman will be showing until December 18th. Richardson's website also features interactive and free downloads, where you can draw your own equations on the "suitman."