Inside the Academy of the Impossible

If Emily Pohl-Weary wasn't a writer (she is), and was instead, oh, say, a stealthy assassin/sniper for hire (that's ridiculous), her current mark would be impossible. Wait, that should read the impossible. She's hunting the impossible, and when she finds it she's going to line it up in her scope, pull the trigger and nail that bloated beast right between the eyes.

"We look at the internet and all the information on the internet, and look at people that way," she tells me. "We're all filled with knowledge, so how do we get that out of ourselves and share it. It's about giving people the ability to pursue what they're interested in and to be leaders."

Admittedly, when I first came across her new project — the Academy of the Impossible, of which she is the Executive Director — my imagination went a little wild. Think part circus school, part Zen monastery, where pupils meditate dutifully to achieve unattainable feats of levitation, superhuman strength and spoon bending.

I pictured Yoda and his Padawan, or Professor Xavier's School for Gifted Youngsters, but mostly I just didn't know what to expect. Now, obviously, my dream of Jedi mind tricks went unfulfilled. But the cool thing about the Academy of the Impossible is that, while levitation might not be part of any planned programming, there are very few rules about what could be.

Four years ago, Emily Pohl-Weary started a small literacy group called Parkdale Street Writers, an independent group for youths aged 16-29. She applied for and received a small amount of funding, secured a space in the basement of the local library and began advertising around the neighborhood.

"I started asking myself, where do youth hang out?" she said. "So I started putting up signs in alleyways and in community centres, and I emailed youth agencies around the city."

The very first meeting attracted close to 50 kids — it was already a success right out of the gates. Young people were clearly responding to something, and it became a spot — and a community — where they could express themselves. There's nothing to sign up for, no one scolds you for poor attendance, people just show up if they're able to. And they have been every Tuesday since then; they write, talk, read each other's work, and every year they publish an anthology.

It's a pretty symbiotic relationship, and Pohl-Weary likes to remind people that she feels like she gets more out of the meetings than the people she created them for. But still, it didn't take long before she and her partner, Metaviews founder Jesse Hirsh, started talking about something bigger — something, well, impossible.

"The idea [for our own space] spent many years in a dream state," she explains. "Like 'oh, wouldn't it be nice if we had our own space.' And it wouldn't be just a space for Parkdale Street Writers; it would be a space for other people with other interests to get involved too. But at the same time to sort of incubate and recognize people who have been in the group for four years, almost five years now. To recognize that they also have authority and they also have the ability to teach." 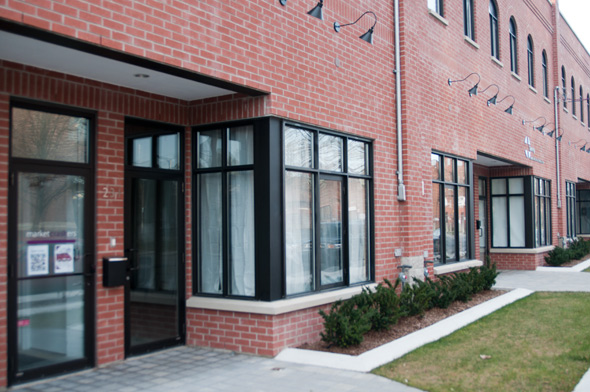 Well, fast forward a few years and head north to the Junction Triangle and the real life brick and mortar building that houses the academy. Currently, it's just an empty room with a stage, some chairs and a few bookshelves, but the buzz is already a little infectious.

The plan is to create a permanent space for the Street Writers, but also something much broader. Pohl-Weary and the rest of her faculty want to build a transparent, inviting environment, run by a community where people can learn whatever perks their interest and in the process, teach valuable lessons in activism, community leadership, and self confidence.

On Friday night they held their first social event — Warm the Academy — a casual gathering of friends, family and of course, The Parkdale Street Writers (now called the Toronto Street Writers). It was an opportunity for everyone to hang out, feel out the space and dream big. One of the directors, Josh Hehner, plans on running self defence classes (he's studied Aikido and Brazillian Jiu-Jitsu for 16 years) as well as CPR and first aid, but he says he's more excited about getting involved as a student than a teacher.

It's a sentiment I heard over and over again while speaking with people — that enthusiasm to be a part of something positive. Unlike a traditional academic or class setting, the project is all about collaboration — to give, but also to be selfish and get. Who knows? Maybe a generous Jedi will walk through the door one day and run a seminar — after all, nothing is impossible.