Launched to much acclaim — and some criticism — four months ago, the Good Bike Project has come to something of a sad end, with many of the bright neon bikes having been vandalized, looted for parts, and left in a general state of disrepair. Always meant to be seasonal in nature, with little support from the City of Toronto, project founders Caroline Macfarlane and Vanessa Nicholas also encountered difficulty retrieving the bikes from the various neighbourhoods in which they were installed. NOW Magazine reports that the once hard to reach Councillor Gary Crawford, who spearheaded the City's endorsement of the Good Bike back in June, finally offered to help collect the bikes last week, but there's still the question of what led to the project's struggles in the first place.

It started rather auspiciously, but in hindsight, it seems inevitable that the bikes were destined to fall into disarray. Part of this has to do with the limited support the artists received, and part of it likely has to do with the nature of the project itself. Although the abandoned bikes that were used for the project came from the City, without any significant funding in place, these spray-painted specimens were never given proper identification on the street. This might have been by design, but months after the first bikes were installed, loads of people still didn't know that they were part of an art project. Many of them just looked, well, abandoned. Colourful, yes — but in the absence of the flower basket of the original version, I suspect that not everyone was convinced that they beautified the streetscape. 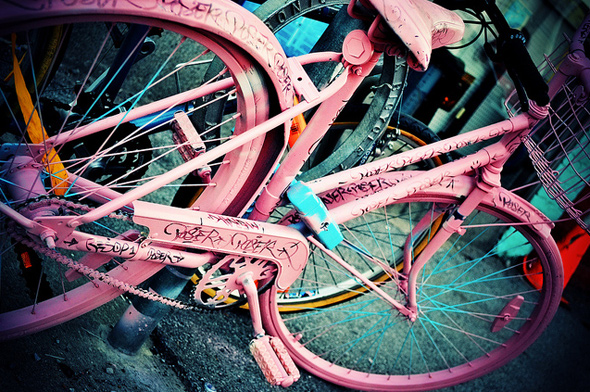 Vandalism of the bikes came often and early. Not necessarily a bad thing — the project was, after all, a sort of graffiti itself — the artists took the various interventions in stride. But as the summer wore on, a number of the bikes had been stripped of their parts, and looked every bit the eye-sore that Macfarlane and Nicholas had sought to combat in the first place. While there were plenty of bikes that remained in decent shape, there were enough beat-up ones to put a damper on the project as a whole.

Would official labels from the City have helped the Good Bike Project? Maybe. Although an identification system might not have been in the spirit of the original bike, I can't help but think that the installations would have been treated with greater respect had the purpose of the project been made clear to all those passing by. While there were lots of photo ops at city hall when the project was first pitched and approved, one gets the sense that City took the DIY description of the project quite literally, and wasn't particularly interested in keeping the good bikes in good shape.

Photo by Gerry Hawkins and AshtonPal in the blogTO Flickr pool