Shot of Art: The Evolution of Graffiti and Revolt

Although we've covered the Toronto graffiti crackdown from a variety angles â including some of the push back from street artists â this visual take on the situation strikes me as an interesting addition to the conversation. The work of local illustrator and muralist EGR, the large mixed media piece takes a holistic view of the crackdown and hints at some of the problems posed by white-washing walls.

Asked by email about the work, the artist notes that it's "meant to be read like a story, left to right. There is a natural evolution of graffiti, beginning with a bare brick wall. When first a tag appears, more are likely to appear, often emerging overnight. Community murals transform highly tagged areas into works of art; involving feedback from area residents and BIAs, building a greater sense of community and virtually eliminating vandalism."

Although the number of murals that have been targeted during the crackdown has been limited thus far, there's concern on the part of street artists that these works will eventually come under fire as well. When murals are buffed, "Toronto citizens, property and business owners suffer the loss," explains EGR. "I believe there needs to be a redefinition of the term 'graffiti.' The voices of those that share these public spaces need to be heard. A backlash has already begun, and who is to tell how far this will go?" 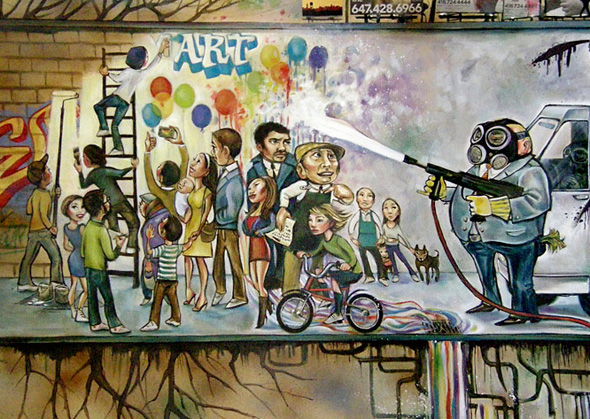 Check out a larger version of Evolution of Graffiti and Revolt at EGR's website.