Abstract Expressionist New York comes to the AGO

The AGO's "Abstract Expressionist New York" is being hyped as a killer exhibit, though what it's killing isn't all that clear. There haven't been many retrospectives of the history of Abstract Expressionism quite this size. This one is unique because it brings together many of the key pieces in the collection of New York's MOMA. Works featured include those of such twentieth centuries luminaries as Jackson Pollock, Mark Rothko, Willem de Kooning, Barnett Newman and Philip Guston but there are many more. The AGO is the only stop off the show is making, testifying to the close, sometimes controversial, tie between the two institutions. It gives visitors the chance to see the disparate, often misunderstood, work that falls under the banner header.

If you've ever been bewildered by Abstract Expressionism, the show does provide a nice summary of some of its major features. It's a very traditional, even conservative, little narrative. It's organized around the principle that it was a kind of queasy feeling that came out in painting. More specifically, it's about two decades worth of such painting concentrated in New York. "Abstract Expressionism" is a loaded term, and not a very good one, generically used to describe some of what happened there. 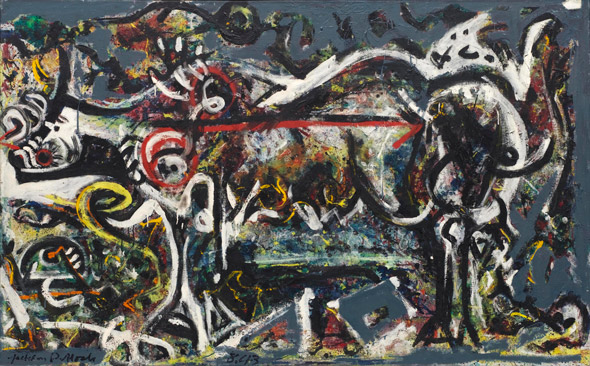 But why this show now? As the organizers were at pains to explain, a decade or two ago you never would have put on a show like this. But now, since irony is passĂŠ, sentimentality and nostalgia are all the rage. Art has become romantic again, or so I'm told almost every time I attend an art event. This has been in the air for the last ten years or so but it's getting thick as fog lately. A kinship between the angst of the post-war years and whatever feeling is supposedly in the air at the moment was conjured up during the press conference as the inspiration for the show. But I don't really buy the similarity of feeling and expression that they're trying to exploit. Today's abstraction is to that of the 40s and 50s what Avril Lavigne is to punk.

The two classic views concerning these paintings were given by Clement Greenberg and Harold Rosenberg. To simplify what are actually rather dense arguments, the former advocated a pure formalism wherein a medium progressed to its natural perfection by gradually discarding everything extraneous. Ultimately, the paint and the surface with all of its colour and texture are all that's left. Rosenberg advocated a more romantic view and cited the thematic import of the work. Borrowing heavily from some badly digested Existentialist philosophy, AbEx painters were turned into heroic figures testifying to the void at the heart of post-war America, the horrors of the Second World War and the dread that suffused the Cold War era. In fact, I would argue, and most of the painters present did at various points, that they're work is composed of representational paintings based entirely in their experience of the world. They were just trying to represent it without being cliched or full of crap. 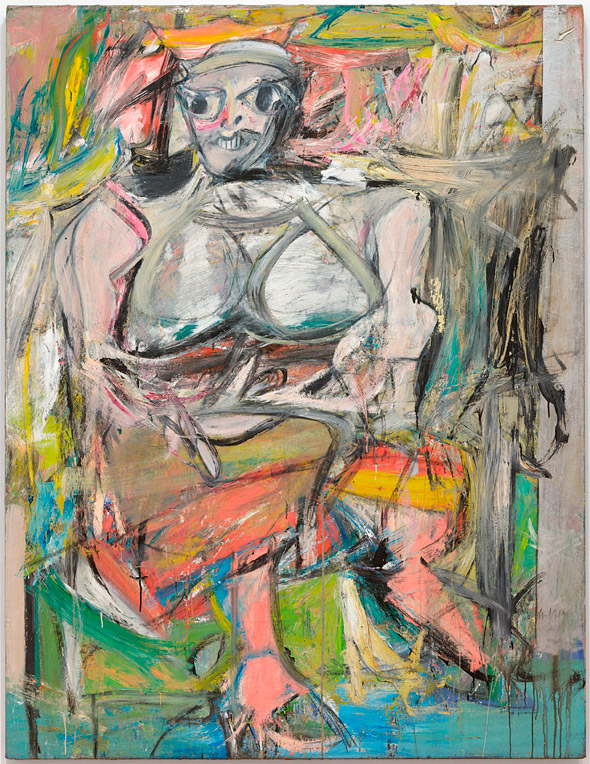 There are all sorts of odd choices littered around the galleries. After a little preamble through some minor, though certainly good painters, and notes on the wall about Surrealism that are just tacked in, you get Willem de Kooning. He's stuffed in a kind of alcove separate from everyone else but Pollock and Rothko get their own rooms. Unlike in the 1950s, their abstractness is actually a little more comforting today than de Kooning's distorted figures. When you turn around, you can see a nice example of Helen Frankenthaler's large scale stain paintings. They're right beside a couple of Clyfford Stills. Still, a sadly under appreciated painter whose reputation has been getting an overhaul over the last few years, stands as the outside of everything else. He rejected New York, the MOMA, the art world and urbanity as just more crap and it shows.

As you walk along, you'll see a sculpture or two, a few decent Lee Krasners, a strong and brutal sand and oil painting by Richard Pousette-Dart. You'll also find little videos to watch about the processes of different painters that play like craft shows for PBS. The sporadic attention to specific personalities also knocks things off key. For instance, Franz Kline is singled out for his "signature style" and thanks to the anecdotes in the cue cards at the foot of his paintings, his stark pieces actually manage to come off as almost sappy. 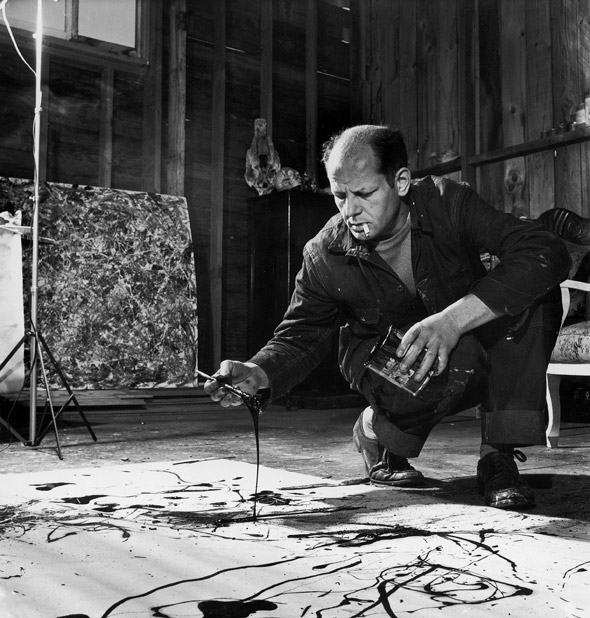 Nearby, you can enter the Pollock room. The pieces run from his early, not especially successful, Picasso influenced works to the paintings he became more famous for. What this part of the show surprisingly, though I assume deliberately, lacks is much insight into Pollock. He's left enigmatic, a spiritual warrior. None of the usual stuff about the macho, alcoholic painter who used to bite dogs and cry when people refused to fight him in bars. Nothing like what you get from the appalling emo biopic film made of him by Ed Harris. Maybe you get a little of the man who struggled all of his life to live up to being the 'American Picasso' but that's it and that seems unintentional: it's a little too unheroic. In the middle of it you can see a major painting like "Full Fathom Five" hung like its a dart board in someone's basement. But the whole arrangement doesn't say much about the way he altered the picture plane or the grammar of painting, as if he'd suddenly revealed a way to write sentences which didn't need nouns.

Rothko's room starts with one of his early Joan Miro influenced pieces. It's historically interesting, but dramatically out of place and knocks everything else in the room off kilter. His more familiar colour field works span the walls. They're extraordinarily careful paintings about undulating hues, often in strikingly original combinations. There's a solemnity to them. He wanted them to express modern life and the fact that it's incapable of being nothingness so it settles for just being void. They're depressing, but if you see them when they're lit properly, they evince incredible op art effects as the hues become transparent and shine through each other the longer you stare. However, none of that happens in this show. The lighting sucks all of the delicacy out. The ingenuity he put into his layers of scumbling evaporates. There's just a plum dullness. This is how the English painter Francis Bacon must have seen them when he said they were the most depressing and murky paintings in the world. 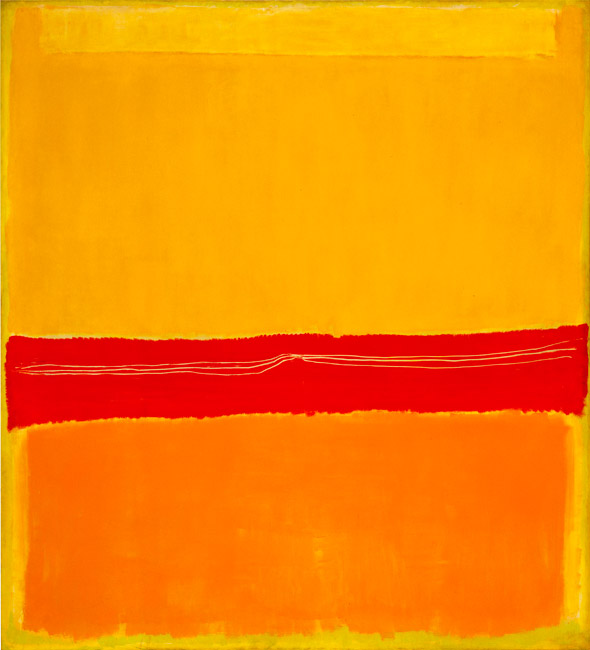 Then things brighten up. You get Ad Reinhardt, Robert Motherwell and Barnett Newman all thrown in a room together like the set-up for a joke without a punchline. Rather, you just get their lines. Newman's lovely thick lines, Motherwell's curves, Reinhardt's squares. But everything seems out of whack because of how they are arranged. These are paintings by people who used scale with enormous impact but their scales are compacted by contact so they look like an adult trying to wear the clothes of a doll.

A show like this isn't really about art: it's about the aura art is supposed to have. While I have little doubt that art has some kind of aura, I don't think it's something you can stick on a platter and serve as an hors d'oeuvre at a dinner party, which is basically how it comes off here, and what most of the painters would have despised. Perhaps I'm cynical, but I find it hard to take. It's not that I think 'quests for the authentic' aren't serious and worthwhile, but I don't think that this show is going to lead anyone down that path. Instead, it leads you down to a gift shop where you can buy an AbEx backpack to put your Jackson Pollock puzzle in, along with your black drip painting t-shirt and The New Yorker postcards.

"Abstract Expressionist: New York" runs at the Art Gallery of Ontario from May 28th to September 4th