The 2011 CONTACT Photography Festival in Toronto is gearing up to launch this week, and with it photo madness is about to descend upon the city. Now in its 15th year, the festival has continued to grow even though it has already become the world's largest. Indeed, the scale of the festival and scope of exhibition locations can be overwhelming: this year features more public installations and 37 Featured Exhibitions, though the number of Primary Exhibitions--not-to-be-missed shows that anchor the festival in its theme-- remains more manageable at six. At Wednesday's media preview, however, artist Elle Flanders put it well when describing the thrill of seeing her work (a collaboration with Tamira Sawatzky) at mural size in the Museum of Contemporary Canadian Art (MoCCA) coutryard: "Whoever said bigger isn't better--they lied," she quipped.

This year's edition of the festival is centred around the theme "Figure and Ground"-- though it doesn't exactly have the immediacy of last year's "Pervasive Influence," or the ring of "Between Memory & History: From the Epic to the Everyday"--this theme is a little more understated, which seems to reflect the zeitgeist in photography today. 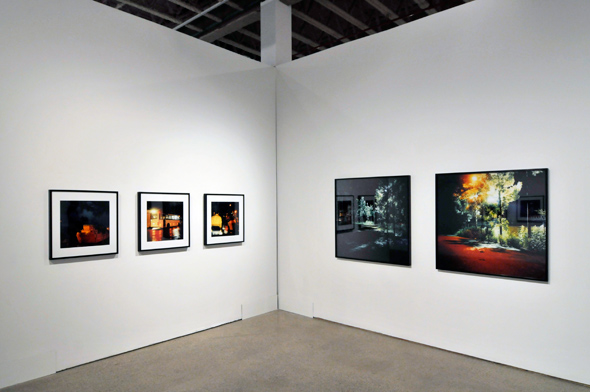 Festival Artistic Director Bonnie Rubenstein offers a few different interpretations of this deceptively simple pair of words. "Figure and Ground" can refer literally to a portrait of somebody in a landscape, but in Gestalt psychology and the writings of Marshall McLuhan, it's more linked to social structures and invisible factors that affect daily life. At its core, the theme focuses on the human relationship to "the environment"--a term that can mean anything from pastoral fields, to urban sidewalks, to the interiors of where we live and work. The idea of traces and mark-making is at the crux of "Figure and Ground," and though the thematic focus is never rigidly applied to the exhibitions, it provides a lens (excuse the pun) through which to view the work. 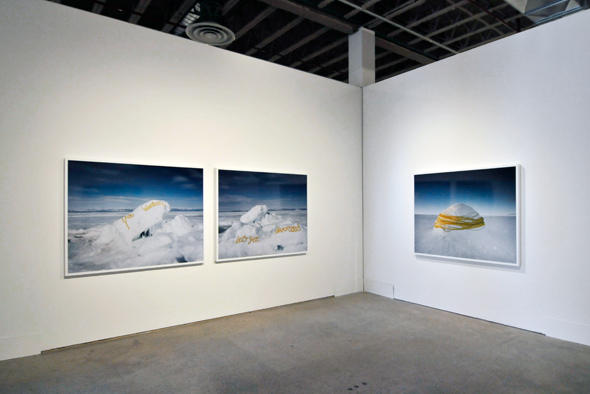 The Primary Exhibition at MoCCA, which tends to act as a de facto festival hub, this year is titled Dynamic Landscape and promises to be a highlight of the festival. Featuring only four photographers, all women, from all corners of the globe, and in varying stages of their careers, it's a pretty big departure from the norm of previous years, in which the MoCCA exhibition usually housed a mixed bag of work by heavyweights like Helmut Newton, Thomas Ruff, and Nan Goldin. In previous years, the Featured and Primary exhibitions have occasionally fallen victim to too much repetition of trends in photography. This year, it seems more like the organizers are more focused on the festival's own vision, and showing the work that they think is worthy.

It's to great effect--in Dynamic Landscape, the work of Olga Chagaoutdinova, Scarlett Hooft Graafland, Viviane Sassen and Dayanita Singh carries the weight of the festival's theme, but also looks vivid, fresh, thoughtful and exciting. Though they're accomplished and talented, these aren't the big names I'm accustomed to seeing attached to the MoCCA show. This is exciting, since for many viewers, Dynamic Landscapes will be their first exposure to these artists' work. Particularly Singh, who lives and works in New Delhi, appears never to have shown her work in Canada before, despite an impressive CV of exhibitions worldwide. Hooft Graafland, based in the Netherlands, explained at the media preview that in addition to premiering her new project here, she was excited to finally visit urban, southern Canada, having carried out the work in Nunavut. All this to say, bravo to the CONTACT team for seeking out these artists, and bringing them to us. 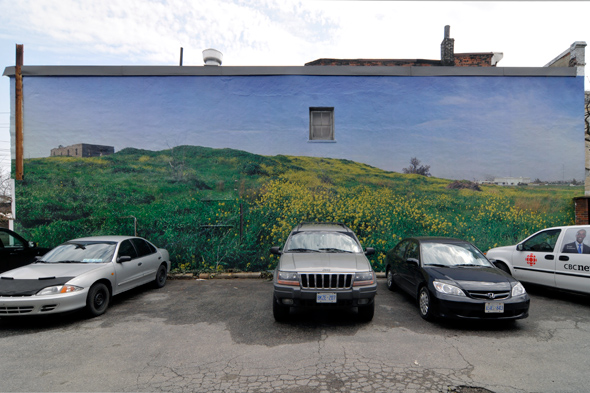 The public installations sound exciting, and are beautifully reproduced in the magazine. However, the level of subtlety means some of the works nuance may be lost in the public setting. Particularly Battlefields 1848-1867 by Giorgio Barrera, (showing in the garden of the Italian Consulate) depicts the sites of 19th-century battlefields as they appear today in the Italian countryside. But in a public installation, the works are more likely to come across as pretty landscapes, rather than historically intriguing sites; a more in-depth reading is difficult when most viewers are likely to see the images alone.

Still, there's nothing like seeing environments, pastoral and otherwise, in another environment, as it were. 'over here over there' by Alain Paiement should be a particular visual treat: the Quebecois artist is known for his manipulated images that play with vertigo and perception, but CONTACT's version of these works have them installed on the floor of Brookfield Place, taking the perspective game one step further. 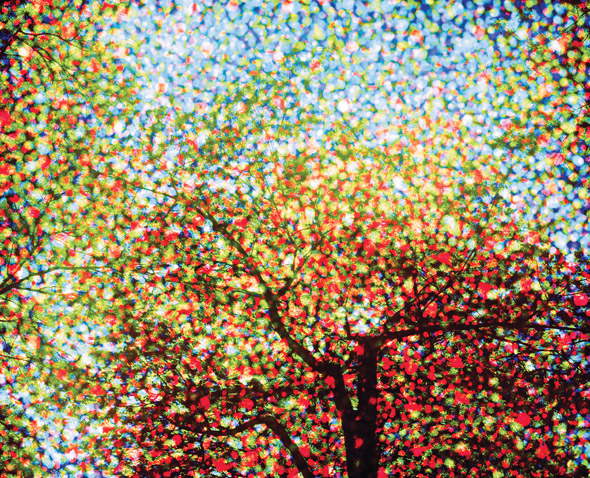 Lucas Blalock and Jessica Eaton: The Whole is Greater than the Sum of the Parts, CONTACT Gallery
Works by Lucas Blalock and by Jessica Eaton (who I've written about before) at the festival's own space push the boundaries of what really constitutes a photograph--a popular theme in the age of new media and multidisciplinary practice -- and also provides insight into the Gestalt interpretation of the theme "Figure and Ground."

Suzy Lake: Extended Breath, Paul Petro Contemporary
Suzy Lake, arguably a star of this year's festival since she's featured in a themed survey exhibition at UTAC, is showing two new bodies of work in a second outing at Paul Petro (Lake's dealer) along with the work of Sue Rynard. Lake's "Extended Breath" and Rynard's "Seed Bank" promise to form a natural pair, and the result should be a great counterpoint to Lake's larger exhibition.

Maslen & Mehra: Mirrored, General Hardware Contemporary
Maslen & Mehra, "site-specific photo intervention" look like cheeky collages at first glance, but closer inspection (and the title) reveals the figures are actually mirrors placed in the scene, then photographed. It seems like a simple, yet thoroughly thoughtful, interpretaion of the theme., incorporating both the "figure in a landscape" reading, and the larger idea of playing with perception. 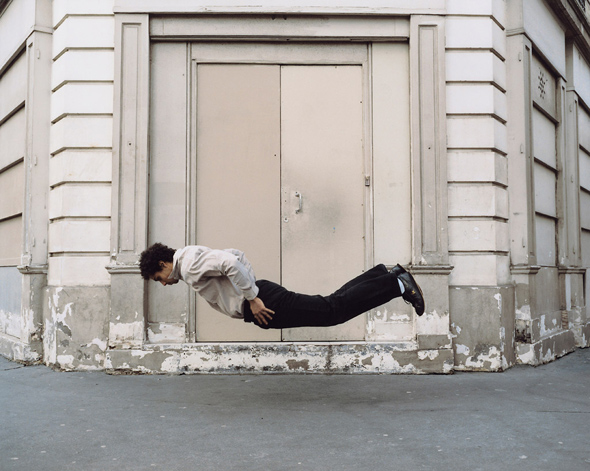 Falls and Implosions, Alliance Francaise de Toronto - Galerie Pierre-Leon
Denis Darzacq, showing with Mathieu Pernot, is actually an artist CONTACT's had their collective eye on for a while. His work never seemed to be a fit in previous incarnations of the festival, but Figure and Ground is his time to shine. These gravity-defying portraits of "dancers and athletes performing jumps" provide a play on the theme that also has a delicate sense of fragility.

Josef Schulz: Sachliches und Formen, Toronto Pearson International Airport, Terminal 1
The must-see that I probably won't get to see is Josef Schulz's "Sachliches und Formen," a series of photographs of industrial buildings, in which the functional features like windows, wires, and chimneys, have been digitally removed. Echoes of the Bechers, certainly, but Schulz's simple use of colour put him in a class all his own. This exhibition is at Pearson Airport Terminal 1, so it's not quite as accessible as some of the other, but the good news is that it run until August 29.

Lynne Cohen: Untitled Work, Olga Korper Gallery
Lynne Cohen, one of Canada's longest-practicing photographers of built interiors, has a banality in her work that verges on visual boredom. But I'm drawn to her quiet images that highlight the strangeness of everyday spaces. Subtle traces of the "figure" are interesting, too--coats hanging on hooks, doorways, and chairs help bring humanity and scale to the photographs.

Alejandro Cartagena: Suburbia Mexicana: Cause and Effect, Circuit Gallery presented at Gallery 345
Speaking of banality: Alejandro Cartagena's exhibition "Suburbian Mexiacana: Cause and Effect" promises to be both a stunning survey of domesticated landscapes, visually on par with the hyped Burtynsky Oil at the ROM, and a consideration of the larger societal situation that gives rise to the suburban landscape. 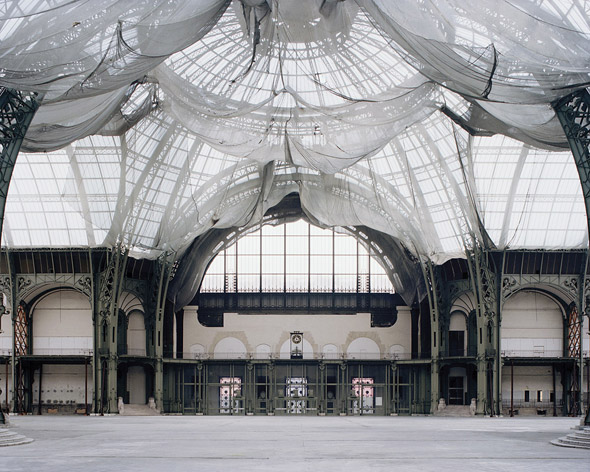 Given the sheer number of exhibitions, CONTACT has also developed a free mobile app to help festival-goers plan their routes. Available for both Blackberry and iPhone, it's a useful tool when out gallery hopping.

Stay tuned for more coverage of the festival, and feel free to share your recommendations and favourites in the comment section.