Not that you need to see either the aforementioned musical or movie to fully appreciate the elegance and grace of this performance. But recent familiarity in story themes surely helped. The lack of audience etiquette didn't. 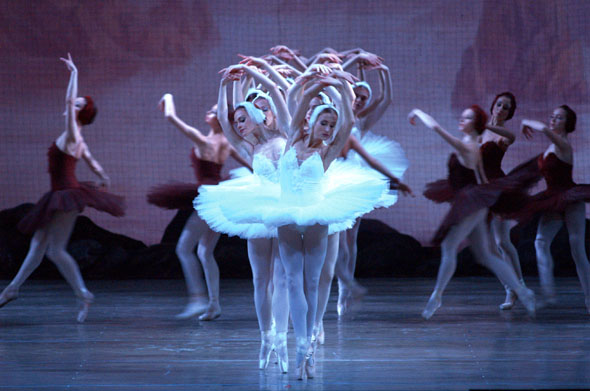 All the same, the pacing of such a long ballet performance -- the show at The Sony Centre lasted almost three hours with two intermissions -- dragged the story out, as pretty as it was.

Sure, the Kirov is known for its adherence to classical purity and artistry since its inception in 1783. This version, with revised choreography and stage direction by Konstantin Sergeyev, didn't push the boundaries enough. It wouldn't hurt to take a cue from the Darren Aronofsky film perhaps and catch up to modern times a little.

Speaking of progress, I heard three cell phones go off during the performance. One of them had the gall to answer the phone! And several times I witnessed some flash photography from their seats. Seriously, people!

Back to the performance, it was a nice touch to see Pavel Bubelnikov conducting the Kitchener-Waterloo Symphony for the Toronto shows.

Taking on the lead role of the white queen Odette and her black swan counterpart Odile was Uliana Lopatkina, full of grace and poise. The entire ensemble of the Kirov (also known as the Mariinsky) Ballet featured a company of 79 dancers who filled the ample stage admirably. Even when many of them just sat like statues along the back or side of the stage, almost blending in to the elaborate set designs by Igor Ivanov.

But unless you were sitting in the front orchestra section, you might find the entire stage rather dimly lit for most of the show. Bring your own opera glasses or binoculars and you'll be better able to appreciate the dainty costumes designed by Galina Solovieva. You'll also be better equipped to shut out all the extraneous distractions.

The Kirov Ballet's Swan Lake plays at the Sony Centre For The Performing Arts (1 Front St. E.) for four more performance, Friday and Saturday night at 2 p.m. and 8 p.m. Tickets range from $60 to $225 and are available by calling 416-872-2262, online or in person at the Sony Centre Box Office.