Google Street View has been used for a number of artistic purposes since it was rolled out back in 2007. But a recent project might just be the most natural fit for the technology - so much so that it's surprising it hasn't been done before. The work of Red Bull (you know, the energy drink company) and the Brazilian ad agency Loducca, Street Art View is an interactive Google map that allows users to document and explore graffiti around the globe. Think of it as a sort of perfect companion and counterpoint to the Google Art Project, which offers 360 degree tours of the world's great museums.

The process for adding graffiti to the collection is as straightforward as it should be. All one needs to do is zoom into the area where the piece is located, pin down the best angle to view the piece and then hit the submit button. Once there, you can plug in such information as the artist(s) name, the type of work it is (graffiti, painting, stencil, paste up, etc.) and other info you deem relevant (like a link, for instance).

Being in its infancy, not much work has been tagged (pun absolutely intended) in the Toronto area. But to put this into some perspective, New York has 19 entries to our 14 so there's obviously a long way before a comprehensive archive is set up. What will also get in the way of the project's goal is the fact that the Google Maps upon which it's based are inevitably dated. If you're looking to add Toronto's Bansky pieces to the catalogue, for instance, that'll be kind of tough to do given that the Street View photographs date back to spring of 2009 (and earlier).

As much as this puts a limit on the project, it's nevertheless interesting to document which pieces have stood the test of time and to have a peek at those that have been lost or replaced. Toward that end, it'll be interesting to check back in on Street View Art in a couple months to see how much the archive has grown. Oh, and for those who aren't fans of all this terrible, anarchic vandalism, this project might benefit you too. Think of this as a guide to all the places you should avoid, lest witnessing all this so-called "art" makes you despair for the state of our society. 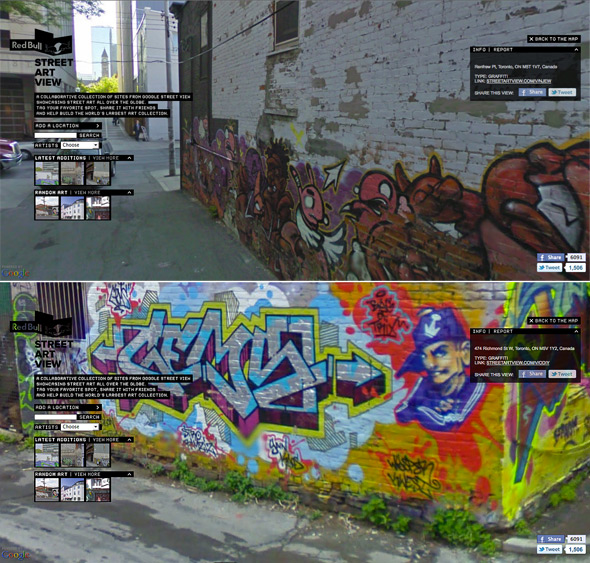