MoCCA looks to get Luis Jacob some local lovin'

For some, the title "Pictures at an Exhibition" might conjure a leisurely walk through an art gallery on a relaxed Sunday afternoon. For artist Luis Jacob, the phrase gestures to an investigation into artmaking and poses a question as to what belongs in a gallery. "Pictures" evokes passive observation, but quite the opposite is happening in the gallery.

Pictures at an Exhibition, now on at the Museum of Contemporary Canadian Art, is a survey exhibition on Jacob's work. It's somewhat of a homecoming for the Toronto-based artist: despite international prestige, including participation in the Documenta 12 festival in 2007, and having his work in a major exhibition at the Guggenheim, many Torontonians remain unfamiliar with his work, a fact that this exhibition seeks to change. 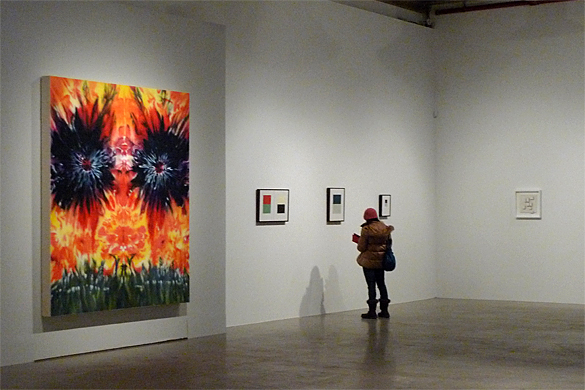 The works on display are largely from three separate series. The earliest works, from 1990 onward, are a group of two-toned abstract paintings in muted hues, with the canvas divided by a line in the middle: one colour above, one colour below. But lest their subtlety become dullness, the artist has given them playful titles that contradict how we perceive them visually: "Monochrome" (1990) is not a monochrome at all, as it's composed of forest green and pale yellow. Another painting, consisting of an array of five grey rectangles on a white background, is incongruously titled "Yellow, White, Pink, Lilac," (1992) prompting me to seek out these hues within the grey.

Much larger paintings, titled as a series "They Sleep With One Eye Open," (2008-2010) are much more commanding in the room. Splashy, psychedelic, and energy-charged, the paintings are executed in bright colours and show evidence of airbrush work. Twin focal points on each canvas mimic the bright eyes of creatures peering out from darkness, and, alone in the gallery, one almost has the sensation of being watched. 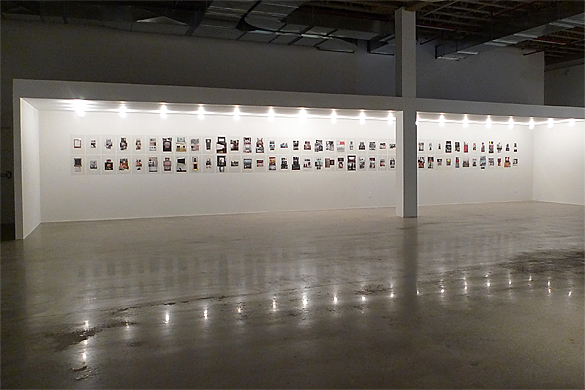 However eye-catching they are, there's quite a disconnect between these and the "Monochrome" group of paintings-- not a huge surprise, considering the chronological gap. Puzzled, I continued to the back of the gallery to check out "Album X," a suite of laminated montages of photographs clipped from books and magazines. The groupings include everything from stock photography and advertising, to photographs from the artistic canon, like Jeff Wall's "Picture for Women" (1979) and an image from Hiroshi Sugimoto's "Theatre" series. The album as a whole, is thematically concerned with observation, framing, looking at frames (empty and otherwise) and looking at art. This ongoing concern offers some clues about the paintings in the gallery: who is looking, and what have they deemed worthy of looking at? 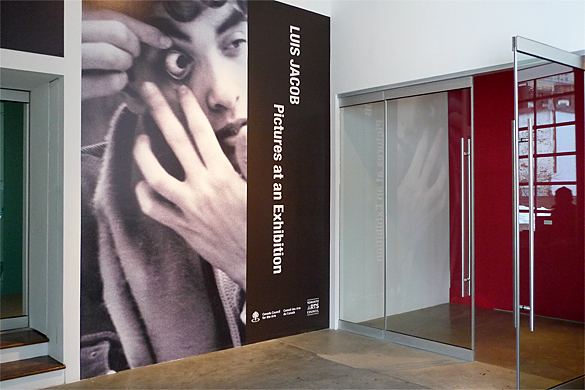 Though the presentation of these works is more opaque to immediate understanding than many people are used to, some further reading is available in the gallery to shed some light on Jacob's artistic concerns and his practice. A small booklet (available for $10, or free to borrow while wandering the gallery) contains an essay and several interviews with the artist, in which he discusses the ideas of "pictures of nothing," the frame as an art-making device, and other themes prevalent in his work.

An additional book, published in conjunction for an exhibition in Mรถnchengladbach, Germany, titled "7 Pictures of Nothing Repeated Four Times, in Gratitude," situates the "They Sleep With One Eye Open" paintings in a suite of four. They are the third repetition of "pictures of nothing" referred to by the title, and seeing them in this context, in the book, makes it clearer how they relate to Jacob's earlier works. I would have hoped that something called a "mid-career survey" exhibition would have fewer missing links present in the overall exhibition; however, looking for clues and trying to solve the mystery is part of the pleasure and intrigue of Jacob's work.

On my way out, I look again at a tiny object displayed in a small glass case on the way into the exhibition. It's an artist multiple made by Jacob, just a small glassy eye. Seeing this as I entered, I disregarded it. But after seeing Pictures at an Exhibition, its meaning is so much clearer, and I have to smile at Jacob's multifacted investigation of what it means to look at art.

Luis Jacob: Pictures at an Exhibition, curated by David Liss, runs from Feb 4 - Mar 27, 2011. Alongside it runs Cabinet (NGC Toronto), curated by Luis Jacob, part of the NGC@ MOCCA partnership.