Who is the mysterious Andrew pasted around Toronto?

Over the last little while I've heard of quite a few "Andrew" sightings around Toronto, the majority of which have been accompanied by some question as to the provenance of the cryptic posters. Although I've yet to see one in person, I have to admit that I've been pretty intrigued by them too. It's hard to look at one without wondering about the identity of the person depicted.

Who is Andrew? Is he a real person? A figure in a wannabe viral marketing campaign? An artist's self-portrait, perhaps?

Having heard a variety of ideas thrown about, I asked my go-to source for all things street-art related, Scott Snider. Although he had already seen and photographed one of the posters, he too was unsure of the exact story of their origin. But one of the comments on his Flickr stream (from Sally Hunter) did offer a theory that I've come to think is quite probable, particularly insofar as I've now heard it offered by more than one person.

The speculation is that the man depicted on the posters is Andrew Mackenzie Hull, a 46-year-old Oshawa-born filmmaker who died tragically in a cycling accident earlier this year. According to his obituary in the Globe and Mail, Hull was a long-time companion of Shaan Syed, a Toronto-born artist who now resides in London.

Among Syed's many works over the years, one series in particular prefigures the Andrew posters. Completed way back in 2001, the artist describes the the Jane Project as follows: "A small banal sketch of a friend, Jane, was taken from my sketchbook, blown up to life size, and hand-printed 1000 times as a poster that was plastered throughout the downtown core of Toronto."

The style of the Jane posters and the manner in which the subject's name is handwritten at the bottom of the portrait offer pretty compelling evidence to suggest the Andrew posters are the work of the same artist. And should this indeed be the case, these posters are in fact a mournful and chilling tribute to a lost loved one.

We received an email from a friend of Andrew earlier today that confirms the above theory. So, I'll say it again, what a touching tribute. Rest in peace, Andrew. 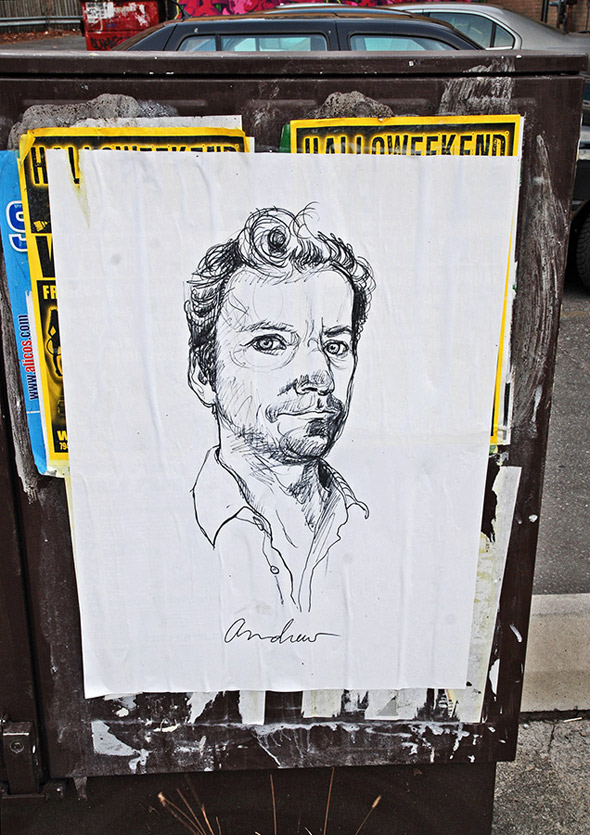 Photo by Scott Snider (a.k.a sniderscion).