It may not be a video game situated entirely in Toronto, but LEPOS, on display this weekend only at Magic Pony, features familiar Toronto settings like the iconic Honest Ed's at the corner of Bloor and Bathurst as well as the nearby Spadina subway station (image below).

The arcade style game currently sits in Magic Pony's back gallery space and is on a four day loan from Toronto-based artist, illustrator and game creator Diego Bergia. His Lepos Bible, a 65 page book documenting the entire project's history, is also on sale along with some prints from the game and other video game related paraphernalia. I've also been told that the arcade game system itself might be available for $3,000. 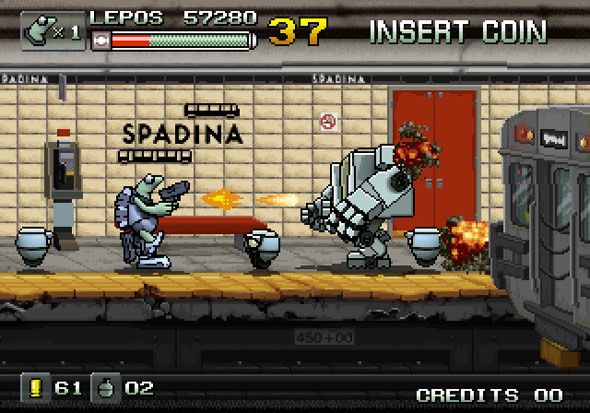 The only downside is that the video game remains a prototype only (it never went into production) so you can't actually play it at Magic Pony. But it is on some sort of video loop so plenty of the screens are available for viewing.