It's always exciting to come across novel or unique maps of Toronto. In fact, just a couple of weeks ago, I wrote a post that rounded up some of my favourite examples of Toronto cartography. And, had I known about local illustrator Dave Murray's Toronto Word Maps at the time, you can bet they would have made that list.

Offered as posters and screenprints, Murray's maps are immediately reminiscent of the Ork neighbourhood maps, which were started at around the same time and also use words to chart urban space. But, upon a closer look, that's really where the similarities end. Rather than covering Toronto's many neighbourhoods in one map, Murray offers a more detailed overview of individual areas and the words affiliated with them. 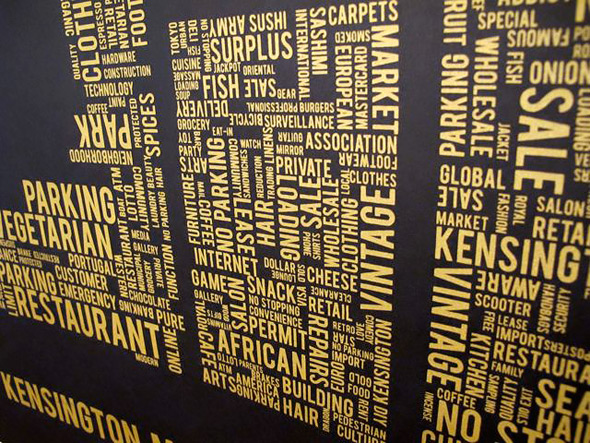 Here's how it all works. First the illustrator surveys a given neighbourhood on foot and records all the words that he sees. Once this raw data is collected, he uses a computer program to transform it into word clouds, which place greater visual emphasis on text recorded more frequently. From there, Murray uses other software programs to organize the information in a manner that spatially represents the neighbourhood in question.

So far, Murray has completed maps of Kensignton Market, the Ossington Strip and West Queen West & Parkdale. On a macro level, it's pretty easy to discern each neighbourhood, but what's really fascinating is to try and pick out the differences between them based on what might be termed their "lexical concentrations." I find that certain intersections and stretches of street are easy to imagine, while others take a bit more work. But, in both cases, the identification process is fun and even a bit enlightening.

To see more of Dave Murray's maps and for information of purchase and pricing check out his website or check them out in person at Kid Icarus and Function 13. 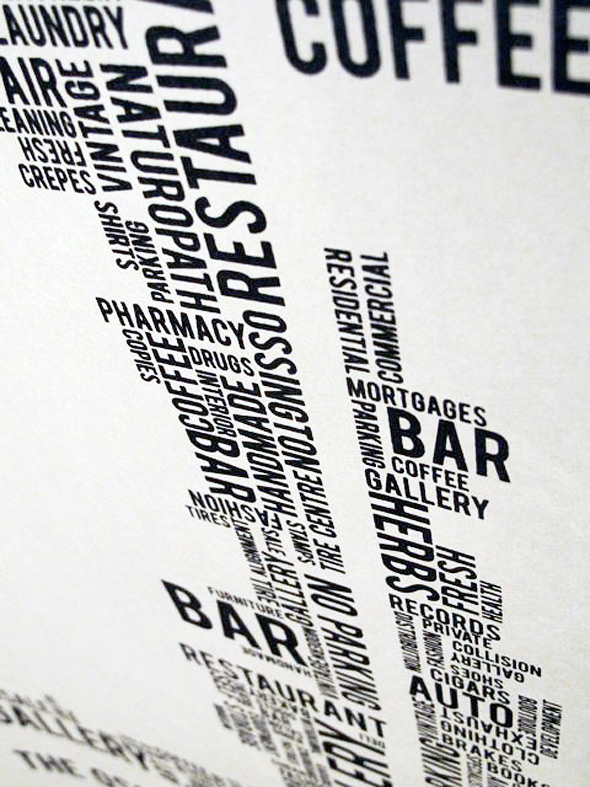