Raymi (or Lauren White or Raymi the Minx as she's known in the blogosphere) celebrates 10 years as a career blogger-about-town this month. Earlier this week I met Raymi at Boom Breakfast on College to talk blogs, haters, and her forthcoming book.

It's my second time meeting real-life Raymi. And, for the second time I am surprised to find a real person. When you exist in the online world more prominently than you do in the real world, you can become something bigger than yourself. We both reveal that we're much cooler on the internet.

By now an authority on mobile self-portraits, Raymi adjusted my hair and provided pointers on my "best angle" before snapping me for a Twitter update. Nothing is private, I realize immediately. Her entire life - and the lives of those in her orbit - are documented publicly. But, she tells me, she can keep secrets. "Otherwise I would have no friends." Keeping her own might be a little more difficult, considering she has made her name with her frank and raunchy accounts of over-boozing and schmoozing. "Anything I haven't shared, I just didn't remember." 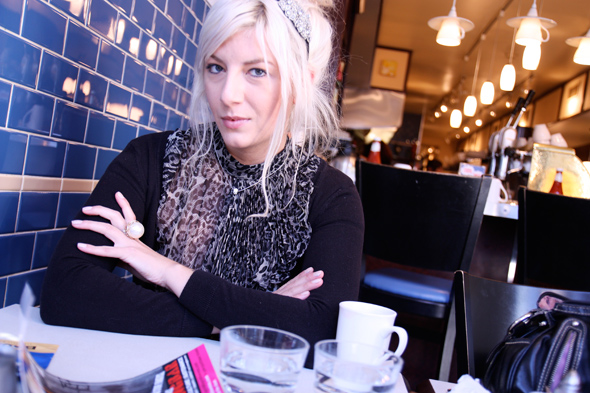 In 2000, Raymi, still in high school, was already interning at a fashion magazine and participating actively on Vice's message board. (In 2000, I had never heard the term "blog".) Eventually, she migrated to her own domain, taking her followers with her. Her goal? To become famous. Famous at what, I'm still not sure. Is this the Kardashian effect? Is it possible to gain "fame" and make money just by partying a lot and overexposing on the internet? I know it is, because Raymi has succeeded.

I admit that I don't regularly read her blog. My limited time earmarked for reading is not best spent following party blogs. I have to hand it to her, though - she is captivating and has an admirable drive. She isn't lacking in adoring "Little Raymis", too. Young girls admire her, and it's taken its toll. "It freaks me out," she admits. The pressure to be a role model in this business is great. There's also the subject of her folks. Her Dad wasn't crazy about the idea (and she doesn't edit on his account), but he's now an avid reader. "It's nature, like a lion eating a fawn. It sucks, but you gotta let it happen."

The feedback isn't always positive, of course. "People love to hate the blond girl." (Hate mail and comments increased after her locks went platinum) She's created a great front - an online persona that's bigger and badder and louder than the girl that sits across from me over coffee. But, she's visibly tired. "I have anxiety about what people think," she confesses, "But I'm still fuckin' Raymi The Minx."

Raymi is criticized for being "too old" to be a career scenester-blogger. And, maybe it's getting to her. "One party will haunt me for like a week." But it was never the intention to make a life out of it. She's writing a book, How to be Famous on the Internet, an autobiographical how-to guide. And she's already curbing the party-girl act. "I don't feel the need to celebrity coat-tail," she says, "The blog still goes on even if I don't go to one TIFF party."

On Thursday, Raymi will turn it on in real-space for the party in her honour, taking place at Wrongbar. She'll be playing a part, I suspect, and I will see no trace of afternoon-coffee-Raymi. "I'm wearing a Playboy bunny costume." Is it a costume party? Nope, just another day in the life of Raymi The Minx.