November ends with a trip to a few shows that don't have much in common, but it's nice to spare the worry about interconnected themes once in a while. 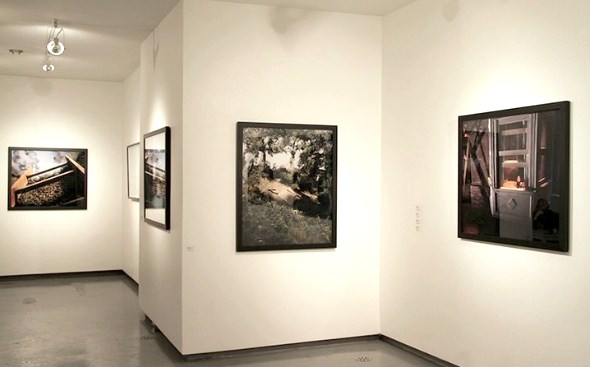 The nomadic Circuit Gallery has currently taken up residence at The Department for an exhibition by Seattle-based artist Bill Finger. The works on display are large digital photos of meticulously crafted miniature sets. Suffused with careful details and delicately lit, they are both evocative and eerie.

Finger works as a cameraman in Hollywood and a lot of his work comes from that experience. Since he's currently working on the set of "Bones," his most recent pieces concentrate on the clichĂŠs of film noir and police procedurals. There's even a re-enactment of a scene from Hitchcock's "Psycho." However, the distortion in size gives the images a very original sense of menace and strangeness. These tendencies also extend to the other half of the exhibit, featuring images that are based on the photographer's memories of childhood. His unpopulated, slightly fuzzy landscapes full of anonymous, yet familiar, objects provide a haunting reverie for lost time.

Derek Liddington at Clark & Faria from November 12 to December 22 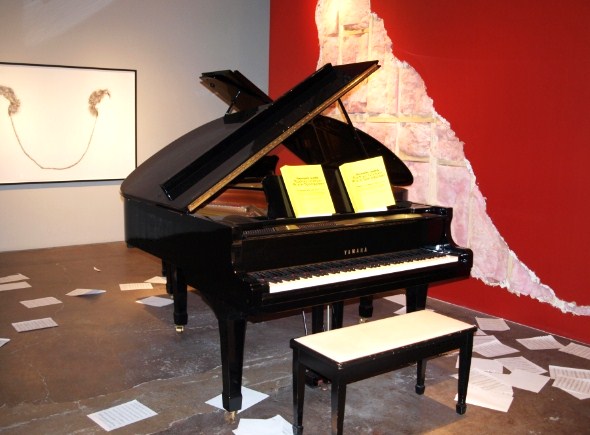 Derek Liddington's first solo exhibition at Clake & Faria continues his penchant for convoluted and 'meta'- heavy installation pieces. This one references seminal Canadian conceptual artist Rodney Graham's "Fantasia for Four Hands" (which had numerous meta-references of its own).

While the Graham work took Kurt Cobain as its pop culture end point, Liddington tries to channel Bruce Springsteen by recasting him as a nineteenth century dandy at a piano recital/duel. Without the performance at the heart of the piece, what's left is a kind of stage set littered with sheet music and a red wall ripped open to show the stuffing underneath. It's rather striking in itself. Of course, if you don't get all the jokes that make up the piece, I guess it's kind of like watching a Portuguese soap opera and imagining it's a Brazilian sitcom. For the full effect, you can catch the final performance for the installation on Monday December 6 at 8:00 PM. 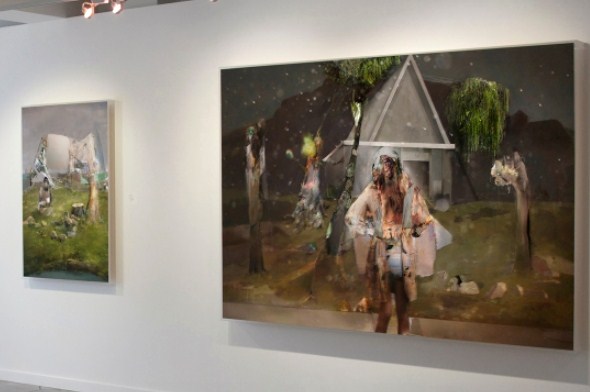 Young Ontario born artist Alex Fischer has a solo show at O'Born Contemporary. His work straddles different media, but synthesizes them in a way that flattens them into one cohesive surface. Working off of found, created and computer generated images, he pulls them all together in intricately orchestrated tableaux. Although their visual language is taken directly from various schools of painting, everything is digital, and left to hang like the print out of a hallucination.

There's something unsettling yet intriguing about their lack of tactility, or much sense of volume, creating an unnerving vacancy. As an interesting point of contrast, you can travel a block down to the street to Angell Gallery to see Stefanie Gutheil's "Animalicious Sausage Suspicions" which use an obscene amount of paint to create images which are formulaic enough in their composition and colour schemes that they can still seem flat (if you squint your eyes) and cut-out.

Nikola Nikola has a rather curious show called "Primus Inter Pares: The Ox, The Ass and the Raised Cross" at Alison Smith Gallery. Although the sculptural installation doesn't quite live up to its Nietzsche references it's still interesting. The same can be said of Ulysses Castellanos installation at Peak Gallery consisting of collages and blacked out celebrities. And this is the last weekend you can catch Terrance Houle's "GIVN'R" at the Art Gallery of York University.

Photos 1 & 2 by Jim Verberg and photo 4 courtesy of O'Born Contemporary.