The Toronto International Art Fair had me asking the question, is going to an art fair a good way to see art? Not particularly. The same way that going to a county fair really isn't a good way to experience fine cuisine. It is, however, an interesting, slightly over-the-top experience. You may not see what is the latest move in art making, but you can certainly see what's selling well, whether that's slightly tongue in cheek Inuit art or generic New York street art. It's also probably the only time that you will find Steven Harper writing the introductory note for an art catalogue. What follows is a very brief snapshot.

This year's fair is comprised of 107 galleries from 13 countries and over 1000 artists. If that sounds like overload, it feels like it too. The dizzying effect is only extended by the setup of the joint. The room is broken into dozens up dozens of little white cubicles divided by blue carpeting. The one exception in the grid is ftc.'s. That gallery really stands out with their epoxy resin coated and painted floor and wall. Fortunately for me, I was there while things were still being set up and I wasn't stuck milling through crowds of perfumed bodies. Pushing along, you aren't likely to get the kind of quiet and contemplative moment that good art, and even bad art, necessitates. The organizers seem cognate of this and have installed brown boxes around the space that you can enter into for a few moments to be alone with one piece of art. It's like a little Zen sanctuary that resembles a refrigerator box. 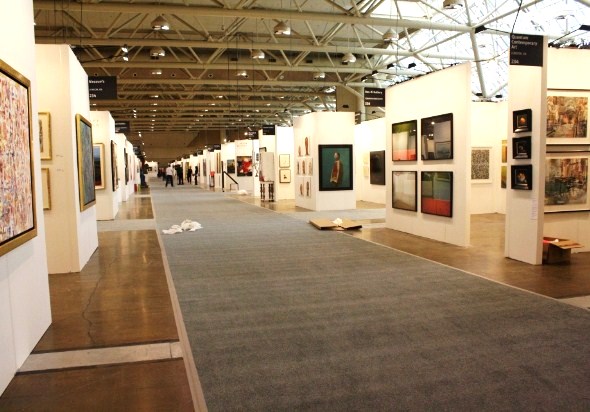 The overt commercialism of the event is given over to parody in the display that greets visitors as they ride up the escalator. "Everything Must Go" is a gaudy and humorous take on pop minimalism. Styled as a faux boutique, it displays and riffs upon works by Douglas Coupland and General Idea. Next door at the MOCCA booth, you can see the special print commissioned for the fair from young local digital artist Alex McLeod. On the other side, you can see the BMW art car. The company commissions artists to custom paint one of their cars for their museum. You can see miniature examples by Jeff Koons, David Hockney, Robert Rauschenberg and others, as well as the actual car decorated by Esther Mahlangu. But that's just the welcome area. Once you get through that, you're into the maze. 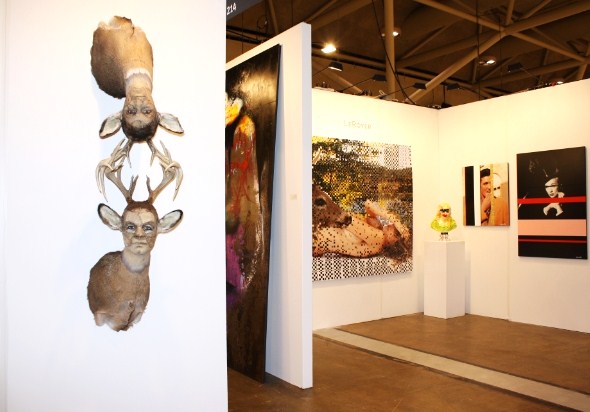 If you are a regular gallery goer in the city, you are likely to see many things that are familiar and have been on display over the past year. There's also stuff by some significant younger artists which wasn't displayed in their galleries. I'm generalizing, but basically you can see some good stuff for the first time as well as some that's worth seeing a second time. It also gives you a pretty speedy introduction into what different galleries are dealing at the moment. 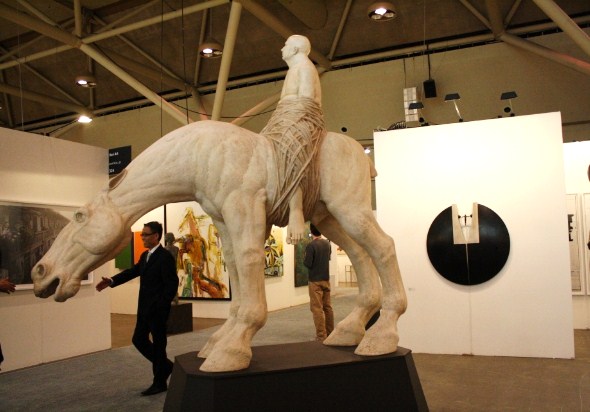 There are quite a few highlights, but, if you're browsing, here are some things worth checking out in no particular order. BC's Winsor gallery has some rather striking sculpture work on display (and there isn't that much of it around this year). Allison Schulnik has some of her thick and fiendish oil paintings hanging in the corner of the Galerie Division booth. There are nearly half a dozen pieces by Angela Grossman at Galerie d'Este. For anyone wishing to catch sight of some of Damien Hirst's work in person, you can see it at Galerie Belleffeuille, although it's probably the most mediocre work in his wildly uneven career. Fellow Montreal galleries Art Mur, Pierre-Francois Ouellette and Dominique Bouffard are all present and worth visiting. There is also the chance to see quite a bit of material by acclaimed aboriginal artist Itee Pootoogook. Other artists to look out for: Josh Bronaugh, Rimi Yang, Shaun Downey and Kristy Gordon.