Nuit Blanche 2010: The best and worst of Zone C

Nuit Blanche Zone C, curated by Christof Migone, cleverly brought together the public's expectation of spectacle with beautifully enduring pieces. Migone, Director/Curator of University of Toronto's Blackwood Gallery, is not new to the type of mass gathering of artists in public and private spaces. Coming from a background of aural and experimental sound studies and performance art, much of his presence as an artist could be felt in the curated section of Zone C.

Of course we are all overwhelmed with how much there is to see, what to focus on, avoiding the progressively-drunken parades of girls in dangerously sharp heels, and seeing a lot of so-so art. What does always fascinate me about this particular art festival, is how many people are out and curious to see, interact, scoff, and observe. Many post-apocalyptic scenes came to mind as crowds gathered around anything with a fire (i.e. A Night at the Round Table at Trinity Bellwoods replete with marshmallows or Orest Tatayrn's neon bonfire at the Gladstone).

There were repeating themes occurring in the Queen West area - balloons (being written on, or popped by sharp darts at AWOL Gallery) video games everywhere - from the faĂ§ade of the Drake, to the funny and clever Neighbourhoodie by Rose Bianchini at CFC Media Lab), the burlesque combined with life-drawing classes at the space above The Social and at Coupe Bizarre; did these shops and galleries have a big meeting and decide to overlay ideas?

Migone's curated sections of Zone C in the Financial District, and the opposite end in Parkdale, "The Night Watch", curated by Christopher RĂŠgimbal were both nicely done. Liberty Village was irrelevant apart from the installation in Lamport Stadium - a space forever associated with Jon Sasaki's mascots from a few Nuit Blanche's ago.

Here are the best and worst of the night. 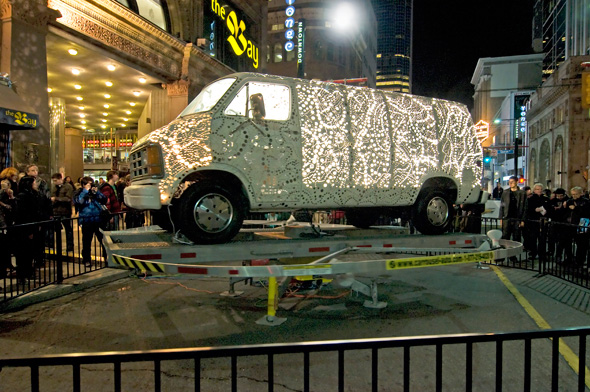 Adams, well-loved in the contemporary art world for his complex sculptures that combine the phantasmagoric with the post-industrial landscape, produced this unbelievably beautiful sculpture using a white dodge van. Reminiscent of Tord Boontje's Garland lamp with its intricately carved organic detailing, it shone like a rare jewel from the usually banal south-west corner of Yonge and Queen. As it turned repeatedly on a rotating car display, I thought, wouldn't it be nice to look at this everyday? 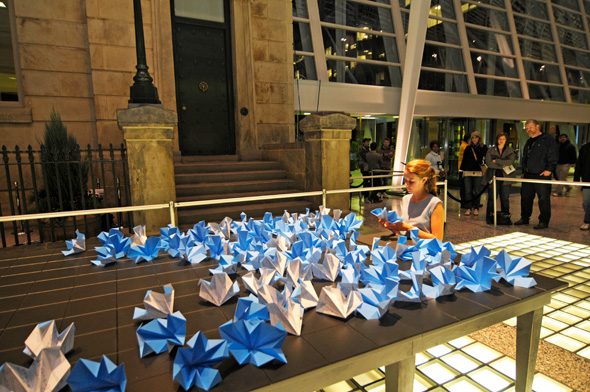 PlaceThis performance using sound, endurance and sculpture was a brilliant conceptual artwork that seemed to be the perfect thing to see at 4:30am. Two black pianos occupied the nave-like atrium of Brookfield Place, with rotating musicians playing Satie's composition 840 times over a twelve-hour period. After each score was played, a collector would collect the blue paper, and deliver it to two people sitting on opposing ends of a long black table where they would fold the blue paper into a delicate sculpture. John Farah was one of the pianists playing from 4-6am, and his state of concentration was remarkable given the slow and repetitive score. 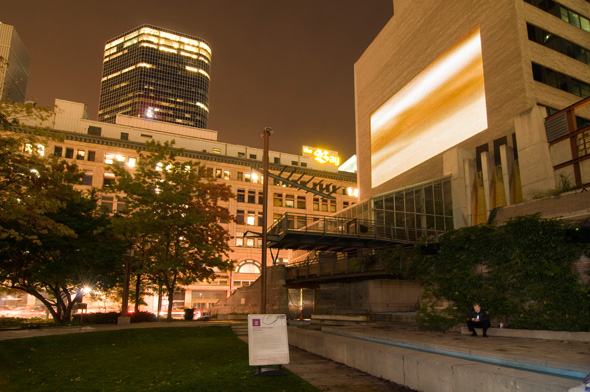 Cloud Gardens, just south of Richmond Street West, was overwhelmed with the slow, steady techno sounds accompanied by a large-scale projection of seven's performers chests rising and falling as they take in and release air. This was such a gorgeous piece - hypnotic and soothing. 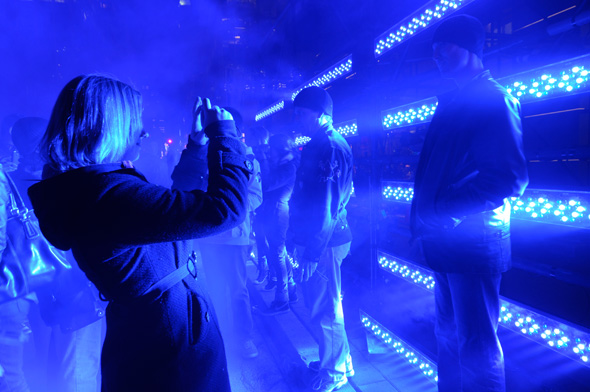 This light installation, blindingly blue, marks the original shoreline of Lake Ontario that used to reach Front Street in 1850. With the mist and ultra-blue lighting the street and the people, this sculpture beckoned one towards it all the way from Yonge and Queen.

A sweet video that is quite the opposite to all the larger big-bang installations. Through writing and erasing the numbers counting up to 60, she deliberately speeds up and slows down the duration of each frame in order to make the counting unstable. 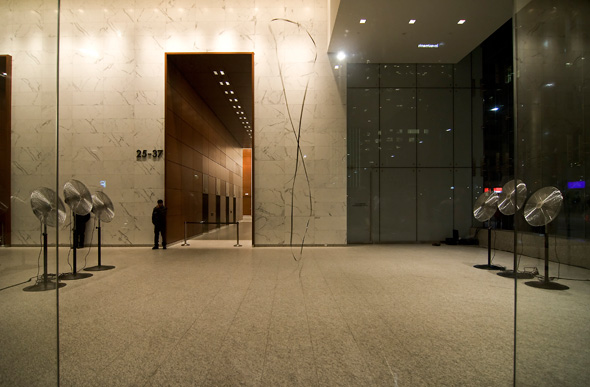 Most simple materials of electric fans and magnetic tape are used: the fans blowing incessant air keep the tape circulating in the air into a big "O". This delightful installation is one I saw in Madrid at ARCO last February - it was great then and great now. 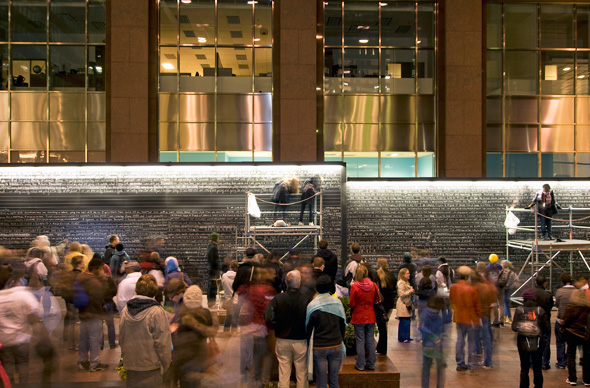 Again simplicity of materials with this large blackboard installation - where viewers were invited to write their answers to questions like "what will you be?" - looking at notions of travel outside the current framwork. 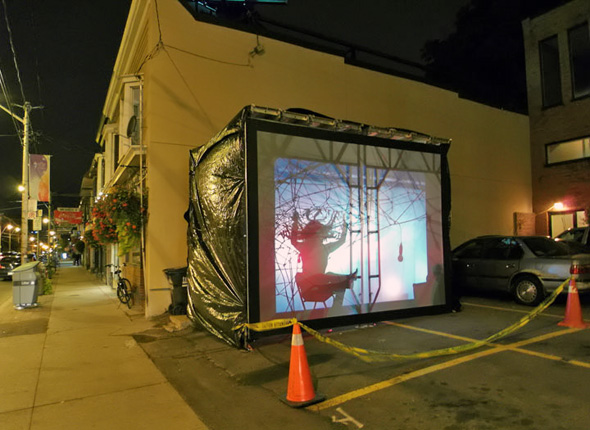 In the lot at Souraren and Queen West, sat this lovely little light installation without a video projection and with actual people inside. Here, Pien uses basic materials of rope and light to tell stories. 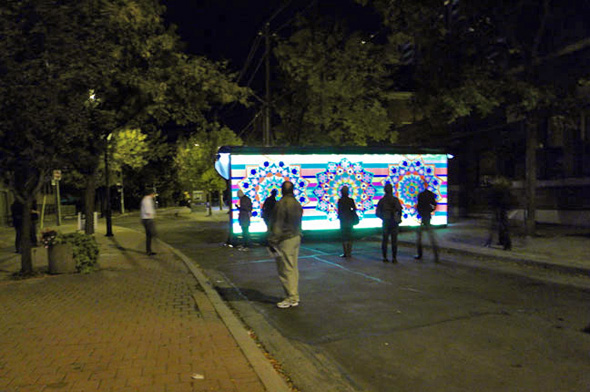 Malakoff created a huge, colourful light installation that reminded me of the fabulous light-bright days. 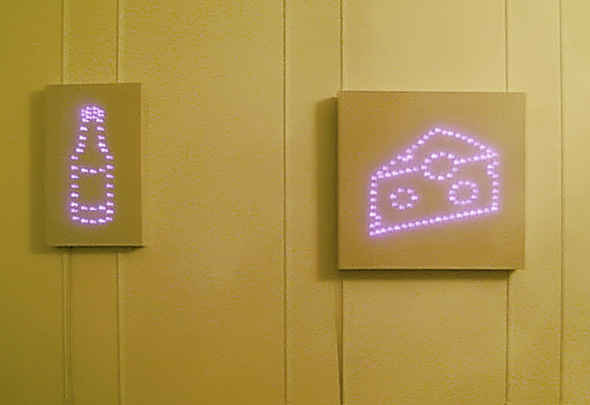 In a very lovely space with fancy hardwood floors, these two artists have hung a bunch of blank beige canvases. But when you turn your camera upon the canvas, you see through your screen a black-light smiley face, or a peace sign. It was a funny smart piece that comments on how we've become obsessed with taking pictures instead of actually looking at anything for more than 3 seconds.

Worst of the night 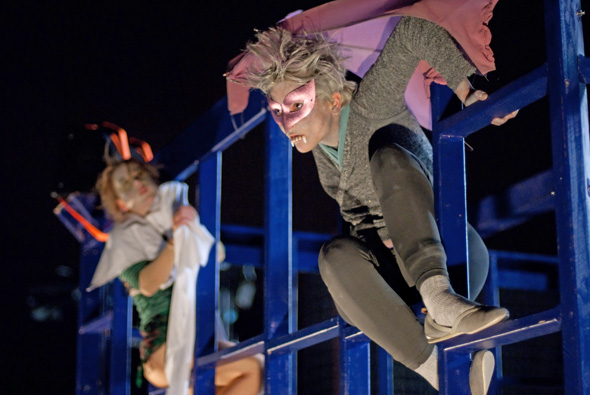 As is the case with public art, somehow we feel we have more of a right to make comments and judge just because something is out in the open. With the open calls and independent projects, there is much hit or miss, leading me to wonder why some of the acts/works even makes it to Nuit Blanche. Perhaps NB should just focus on curated selections throughout the city and cut out the mediocre stuff.

Some pyrotechnics, and bad raver clothes from 1993, and some fire. What is it all about?

Some girls were hanging off a large jungle-gym structure and if you walked around, there was information about the Buddhist god, Tara, or the Hindu god, Kali. This was unclear as to exactly why the women were climbing through this structure, and where on earth where the gargoyles dammit?

What could have been an great outdoor, participatory artwork just turned into a campfire with a bunch of people roasting marshmallows. I wanted to hear stories, but no one was talking to anyone apart from the buddies that they came there with.