Nuit Blanche 2010: The best and worst of Zone B

Nuit Blanche is always tough to review because, frankly, the "show" is more the audience than the actual art. That's deliberate in an event like this and tends to lead to pretty mixed results. Actually, what was most interesting about the 2010 edition was how irrelevant and meaningless it made the art itself, regardless of its relative merits. Nuit Blanche is really about taking a walk, or as I heard dozens upon dozens of people around me say, "It's like taking a walk and watching bad TV." And I'm guessing that for the majority of people around me who were arguing with their bored children, or puking on the subway, or complaining about the brief lineups, or men in their thirties trying to pick up teenaged girls, it was really about taking a walk at night and maybe having some funnel cake or getting drunk in public.

That's all fine, but that wasn't what any of the art was about or was trying to do as it attempted to engage the public. A big part of the problem with events like this is that the two participants, the crowd and the artists, don't really speak the same language, even though some artists try pretty hard and end up weakening whatever they have to say. In the end, it's rather like attending a freak show only with more public toilets, or a really bad high school dance. 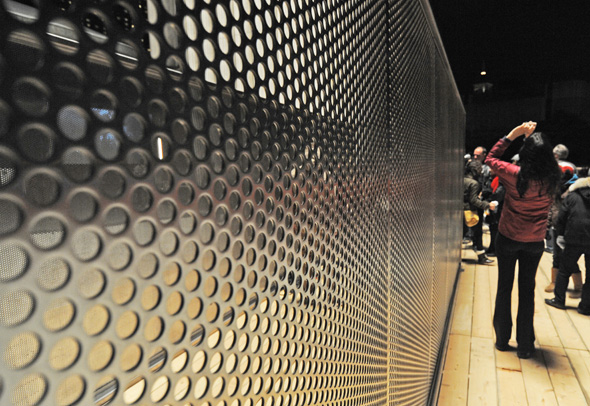 On top of city hall, with some subtle and sweet light architecture, Dan Graham's piece sat overlooking the massive video projection of pieces by DJ Spooky. While the video tried to think about the arctic in a rather stilted way, Graham's installation was stranded in the long grass. Most people streamed through his piece making faces. It was like watching people at Niagara Falls stick their heads through paintings to be photographed. 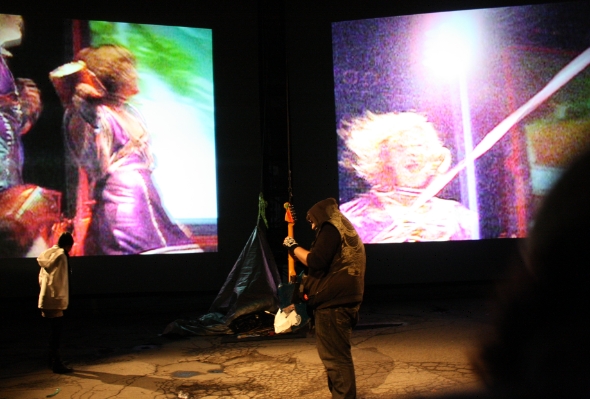 Sonic Youth guitarist Ranaldo and his partner put together this sound and video installation. They used the space extremely well, creating a resonating space under the sky. The size and scope of things was effective. It was one of the few things I saw where some of the audience actually seemed involved rather than bored or even mildly offended by whatever they didn't think they were getting.

Daniel Lanois' "Later That Night At The Drive-In" 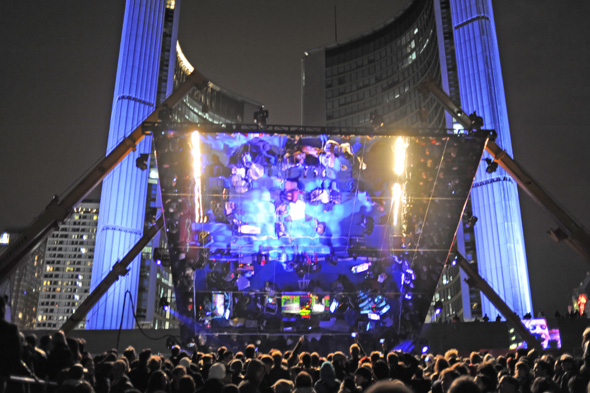 The famous producer and musician brought his large scale video and sound piece to the square. It was highly atmospheric. The abundance of fences and eerie lighting gave it a slightly apocalyptic feeling which compensated for the less-than-successful video component. 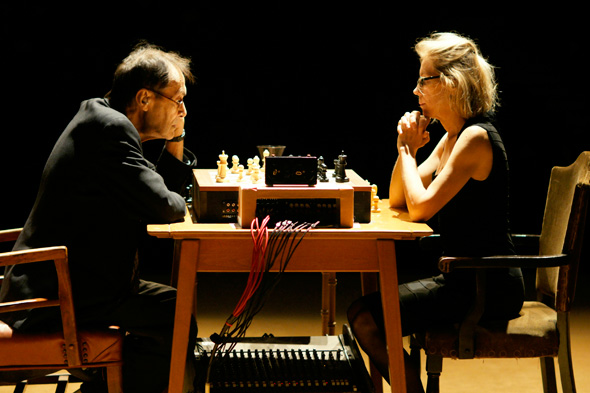 The event was a performance of the famous chess match between John Cage and Marcel Duchamp. The movement of the chess pieces triggered the changes in the musical score. It was lovely. I grew up listening to John Cage (completely of my own volition: yes, I'm a freak) and I would glad sit and listen to him being performed for twelve hours. In fact, I've attended such things before. It was nice and soothing and seemed to alienate families from the space, which was a bonus. 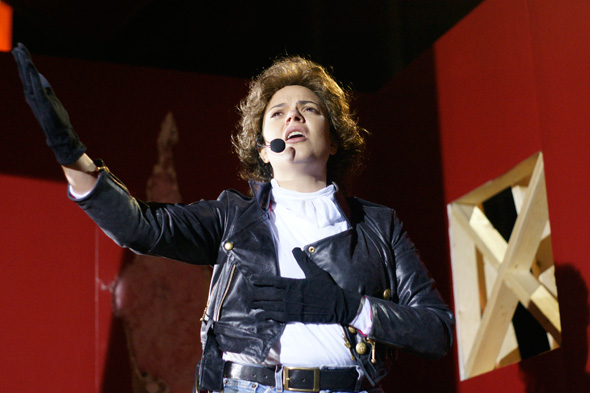 The surprise of the night was Derek Liddington's piece which managed to be the most intelligent engagement with the entire event. Using a campy set, he examined the attempt to bring 'high art' to the masses through opera, fusing a capella aria with Springsteen songs. What emerged was a freakish endurance test as the audience crowded around to watch these people exhaust themselves in what was achingly reminiscent of a brutal sequence from a reality TV show. 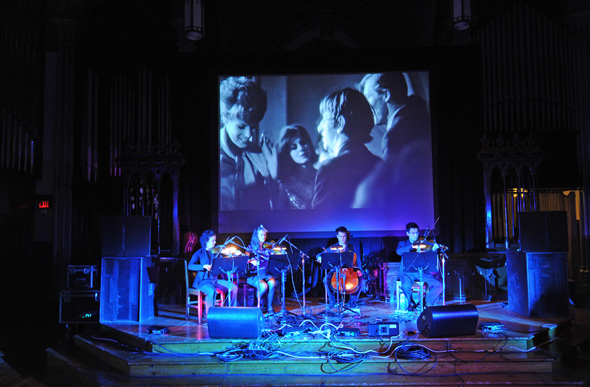 The Beatles film "A Hard day's Night" was slowed down so it could run for twelve hours. This was accompanied by songs from the soundtrack played by a string quartet at the same pace. It was good and hypnotic. The big revelation though was that, in slow motion, Paul McCartney still seems like a pillock, but Ringo Starr gains a weird kind of pathos all his own that was only slightly glimpsed in "Caveman." 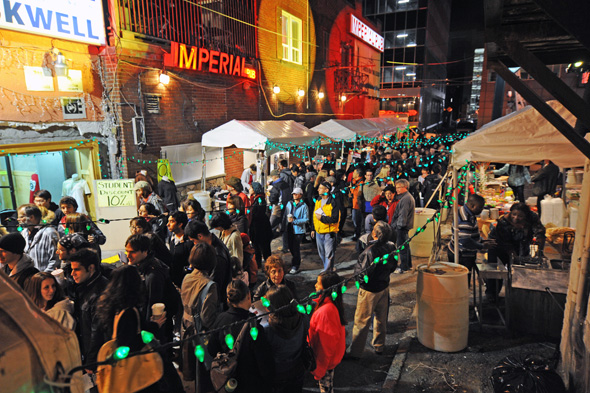 Although the events of Nuit Blanche were pretty mixed, some were a great deal more unsuccessful than others. You've seen the better of Zone B, now here are a few that really didn't work out.

Shannon Linde's "Eternal Encore"
Two screens faced each other. One was a band performing, the other was the crowd. Although the piece attempted to build up to the frenzy of a concert's orgasmic finale, it never reached it. Instead, it was like an event that could never come. A big part of that was because the size and volume just weren't there, but part of it could have been because Axl Rose was involved.

Vesna Jocic and Jennifer Davis' "Happy Birthday to ___!"
It was an all night birthday party as group after group of people joined around a table to celebrate. It was a neat idea that could have been interesting if it was just randomly and whimsically set up on the street rather than in the middle of a festival. Unfortunately, it could only be as good as its participants and for the twenty minutes or so that I watched, it was less jubilant than most funerals I've attended.

Mammalian Diving Reflex's "Nuit Market Starring the Toronto Weston Flea Market"Since the whole event felt suspiciously like being trapped in a mall during an anemic frosh week, adding a makeshift mall seemed remarkably pointless and it didn't engage in any remotely interesting way with its surroundings.