Some painting, some photography and even some high powered weapons are all on display in this week's Art Agenda. 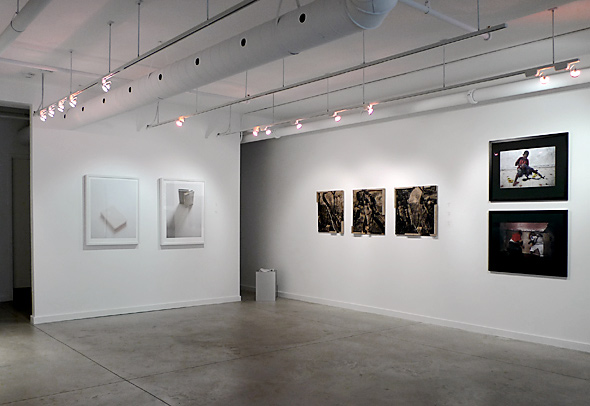 O'Born Contemporary has opened the doors of their new spot on Ossington and is celebrating with an eclectic group show. The space is clean, bright and somehow feels slightly more lived in than it actually has been. The gallery specializes in photo, and photo-based, works. There were stark Modernist black and whites, photojournalistic images taken from the conflict zones of Africa and mixed media pieces which played with the boundaries of what a photo can be. Basically, it was all over the place and felt like going to the rummage sale of someone who just moved in. That's good and bad. John Montheith's subtle, slightly alien images of common objects have a certain quiet interest. Dominic Nahr's photos of suffering in Uganda succeed mostly as exercises in the voluptuous use of black and colour than as documents of anything. 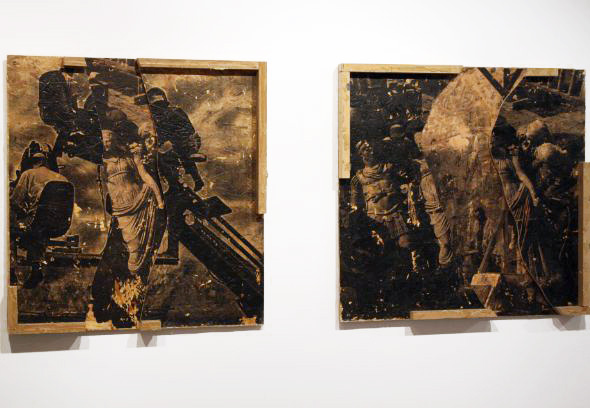 Meanwhile, the most interesting pieces in the show are the mixed media ones by Liam Crockard which blur the line between photo and sculpture as they giddily exploit various textures and fibres as they take photos apart. 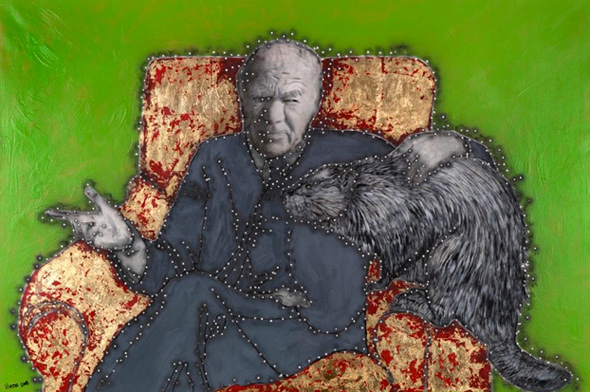 One day, Andy Warhol was sitting in the factory when someone walked in and asked if they could shoot some of his pictures. He thought they meant photograph them so he said sure and then they took out a gun and opened fire on a small stack of paintings. That rather pointless anecdote has nothing to do with what Mitic does in his show at Gallery Moos. In bright, sometimes garish, colours, he paints what resemble paint-by-number versions of famous portraits, or even historical paintings like Goya's "El tres de mayo de 1808 en Madrid," and then literally shoots the outlines of the figures with a gun.

In a sense, they are like documentary photos, in their representational naivety and crudeness, but their deliberate stupidity has a different significance. Basically the gesture is an attempt to examine why violence done to works of cultural import (like the Buddha statues of Afghanistan), is sometimes given more weight by certain quarters than the violence done to the civilians around them. I'm not sure it's the most convincing gesture, and the use of materials does little to accentuate the textural possibilities of gunfire, but the battered car filled with bullet casings sitting outside the gallery was rather striking. 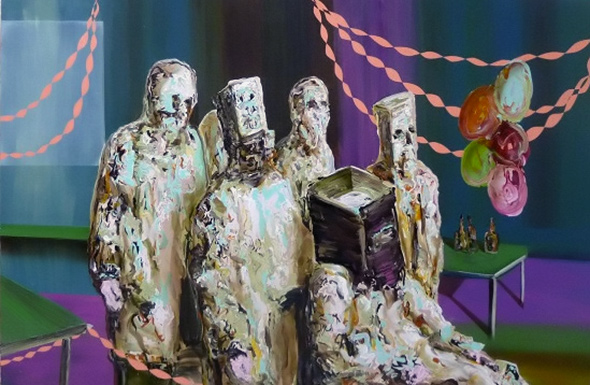 "Holy shit! That's a lot of paint!" the man standing next to me exclaimed as we stood before Flanagan's recent works on display at the Angell Gallery. And it is a great deal of paint. Although the painter is still early in his career, he's already known for the thickness of his squirts. He often works by spraying his canvas with paint he loads into condiment dispensers to create remarkably meaty texture.

But there's a lot more to it than that, and this show demonstrates more versatility and sensitivity than that gesture suggests. He's expanded his techniques to include airbrushing and some wonderful soft and thin textures as well which provide relief to the intense scrawls and oozing surfaces that fill his planes. The images themselves feature stark, mottled figures which verge on the sculptural in their depiction. There's an overriding sense of alienation and even nausea in them, but they aren't expressionistic rehashings, there's too much humour and gentleness in them for that.

Also this week:
On the way to see Flanagan, you can also catch Annie Morrison in the front gallery. It features wallpaper and scant furniture all done up as a bland late Victorian sitting room. The only thing is, all of the work has been painted blood. Across town at Babara Edwards Contemporary you can catch Eric Fischl's watercolour figures, which are essentially softcore porn, kind of like what David Hamilton would produce on an off-day without his camera around, but maybe marginally more charming. On a similar note, this Saturday, the Edward Day Gallery will be opening a new group show devoted to censorship and obscenity featuring some classically controversial Canadian artists. Go to find out who they are.