Intriguing juxtapositions and playful forms dominate this week's look at a few of the show's currently in galleries around the city.

Group Show at A Space Gallery from September 17 - October 30 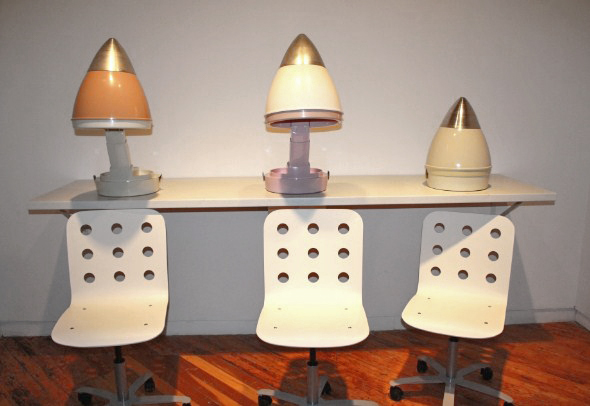 The A Space Gallery is hosting their current show as part of the imagiNATIVE festival. It features a set of eclectic artists, joined together under the rubric of numbers and counting practices in aboriginal culture. This finds itself played out in some wildly diverse forms throughout the exhibit, from musical videos to sound installations to hauntingly fragile and weird sculptures. Each piece transplants an aspect of an aboriginal traditional into an unusual context which makes for some striking assemblages. 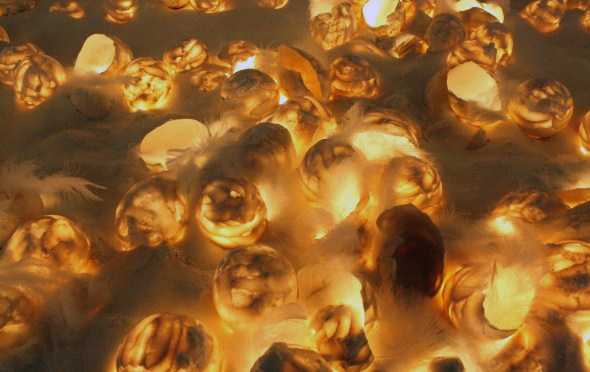 Among the highlights: Jordan Bennett's "Turning Tables" is literally a turntable set made entirely of wood that allows the visitor to remix the words of the artist; Lisa Reihana's "Colour of Sin: Headcase Version" invites visitors to sit and listen to the looping and warping voices that echo through the cases that you slip your head into; and KC Adams has an eerie and perplexing piece on the floor called "Cyborg Eggs" which is composed of cracked, glowing shells densely arrayed on a bed of sand. 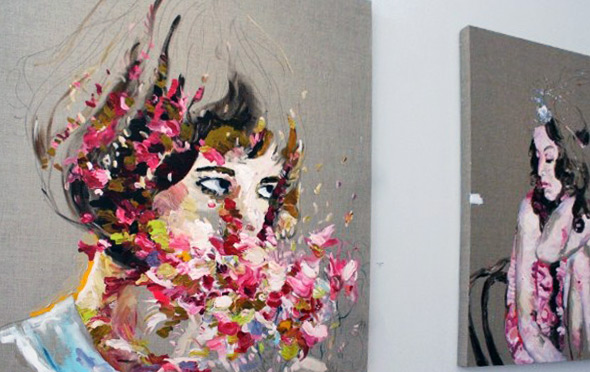 At the Parts Gallery in Leslieville, Judith Geher has a new set of paintings on display (also depicted in lead photo). The subtly textured portraits are done with acyclic on linen and oil on wood. Invoking static and strained moments, they play on density and rhythm to create frayed and discomforting images. Although they owe something, in a strictly figurative sense, to the glossy world of fashion and advertising, the sheen of that world is completely eroded, leaving a roughness that's marked out in harsh lines at the base of the image. These are then accented by a build up of bright and inviting colours. Her brush work is often a combination of lashing and imprinting, creating sometimes dangling details and at others jarring blocks of colour that decompose the forms. 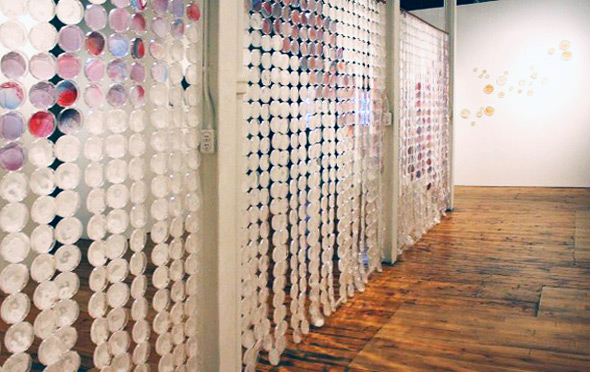 The show at the Red Head Gallery takes a look at the dread accorded to microorganisms and searches for the beauty that they can create. It showcases mixed media work by Elanie Whittaker featuring bacterial cultures and salt, sometimes in intriguing blown-up microscopic photos but predominantly on view in a large screen made up of petri dishes. Scattered around the room are also small decorative motifs made of the dishes. It's a rather troubling show and not without its flaws, but there is a fascinating perversity to it. The troubling part of it isn't the bacteria itself, but how closely the whole thing comes to resembling the showroom for a new block of condos. But while those tend to simply be vacant and sterile, this seethes with the overt presence of carefully imprisoned life forms in moments of quiet loveliness.

There's a four day symposium at the Open Studio as part of Printopolis, the city's celebration of print making. "The Shape of Anxiety: Henry Moore" in the 1930s opens at the AGO on Saturday and Gordon Rayner's new and strangely charming wood and polychrome constructions are on display at Christopher Cutts.