Nuit Blanche, Toronto's all night art expo, is just around the corner. As usual there's a bit of everything in the mix, from sound art to light art to dance, disco, performance art, all night film screenings and even some shopping.

This one night festival was originally created in Paris in 2002 in a bid to make contemporary art more accessible and inviting to the public. It has since popped up in major cities around the world to the delight of art aficionados, insomniacs, psychedelic enthusiasts, caffeine freaks and even those who are merely curious.

The event begins at 6:45 p.m. on October 2 and runs until dusk of the following day. Here is our guide to what you need to know to make the most of your night. 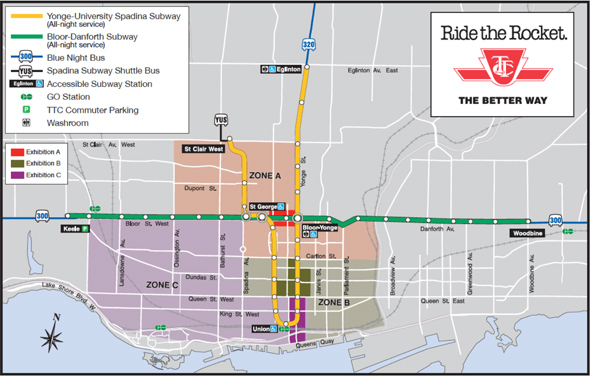 Organizers have tried to make this year's edition easier to navigate by concentrating the main exhibition projects along the Yonge-University subway line, but with the independent projects scattered throughout the three zones, many will make use of the TTC to get from one zone to the next.

The TTC will be offering extended service throughout the event with the Bloor-Danforth subway line running all night from Keele to Woodbine and on the Yonge-University-Spadina line from St. Clair West to Eglinton. Unlike certain cities that offer their public transit for free during their version of the festival, the TTC is offering a special night pass for the price of a day pass. More information is available here.

Also noteworthy is the fact that Yonge Street will be closed to vehicular traffic between Bloor and Front streets, turning it into one big promenade for the event. 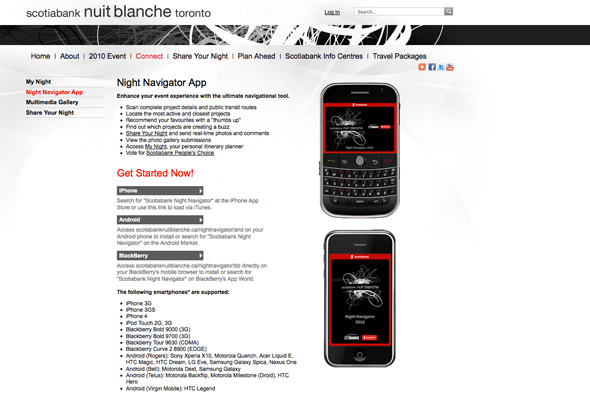 Along with offering a pared down mobile version of the main Nuit Blanche website, there are two primary (as in festival-approved) web tools to help organize your night. Launched for Nuit Blanche 2009 "My Night" is the festival's online personal itinerary planner, which as we wrote last year, allows users to "browse the online festival guide in advance, selecting exhibits of interest and creating a personalized, custom itinerary complete with maps, and descriptions. These itineraries can then be printed, or shared digitally via social networking tools like Twitter and Facebook."

We covered these in a more extensive post before, so have a look there for more information.

Food
Last year we featured a post on "Late Night Eats During Nuit Blanche," and much of the information remains valid. I should, however, qualify this by saying that I haven't confirmed whether or not every entry on the list is open the same hours at this year's edition. Watch for a dedicated post on this or an update to this post with more concrete information.

Recommended Exhibitions by Zone
There is a fairly eclectic mix of stuff from the comedic to the meditative and the historical to the basically pointless. 130 distinct exhibit are spread across the three zones this year. Anyone who has ever attended a Nuit Blanche knows that they can be pretty hit or miss, so you really might want to check out the extensive online program on the official Nuit Blanche site in advance if you have the chance. Otherwise, here are a few of my picks of what looked promising. 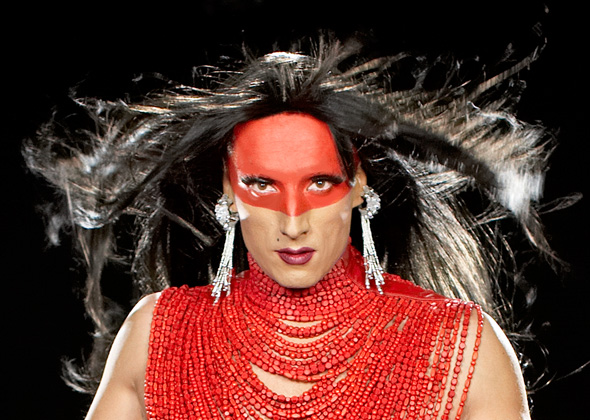 This area covers north downtown and features 31 exhibits. Most of them tend to be on the larger scale and were designed to be appropriate for crowds. Light architecture, like landscapes, light games and things that would make a pyromaniac scream in joy will be the major attractions for this zone.

Iskootāo
Kent Monkman Gisèle Gordon - Performance (photo above)
The performance shows how a "650-tonne billion-year-old chunk of the Canadian shield is transformed into the pulsing heart of Mother Earth," which sounds like one of the abominations from the Olympics opening ceremony, but with Monkman in his drag persona, Miss Chief Eagle Testickle, it could actually be fun.

Crossings
The OpenEnded Group - Video installation (photo below)
The movements of the crowd around the ROM will be turned into animation and projected all over the structure's convoluted surfaces. Just think: you can watch yourself walk up the wall and into the sky.

Obsolescence
Micheline Roi - Sound art
This piece attempts to turn a piano into a speaker and a speaker into a piano in this look at how music in the home has changed.

KortuneFookie
Jean-François Lacombe and Christian Desjardins - Interactive installation
It may be your only chance to have your fortune told by a giant cedar fortune cookie. 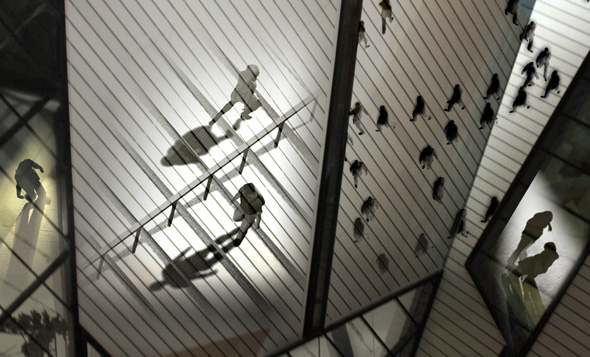 All Night I Mourned Myself
John Shipman, Pamela Williams, Zhang Xing John Shipman - Multimedia installation
Since most of us will never attend our own funerals, this might be the closest you'll ever get. The event asks you to lie down and pick up the CoffinPhone to hear your friends and family mourn you while you listen to some funereal music and select a suitable monument to erect on your grave.

One at a time
Group Exhibition - Installations, sculpture, performance
For the more historically attuned, at the Justina M. Barnicke Gallery and University of Toronto Art Centre, you can see sculptures installations and performance art from the history of those forms. One of the only locations that involves some nudity (so, if that's a plus or a minus for you...)

Sonic Toys in Transit
junctQín keyboard collective - Performance and sound art
Toy pianists and a cellist perform some abstract scores while being forced to interact with their randomly changing environment.

Music all around U
Group - Multimedia and music
More of a concert than the other events, this features music by Canadian composer R. Murray Schafer along with a light show and a kind of battle of the bands between classical and jazz musicians. 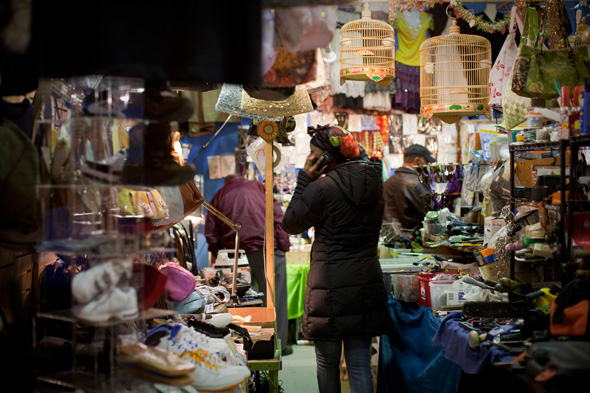 This area covers central and east downtown with 40 different exhibits. There's a concentration on the history of performance and public art with some non-sequitor pieces thrown in.

Nuit Market Starring the Toronto Weston Flea Market
Mammalian Diving Reflex - Installation (photo above)
An ad-hoc temporary market in an alleyway on Yonge street. I think I've seen these before but this one is legal.

Later That Night At The Drive-In
Daniel Lanois - Multimedia
Multiple screens and multiple tracks of music are featured in this elaborate performance and video piece featuring a dancer and the famous producer. 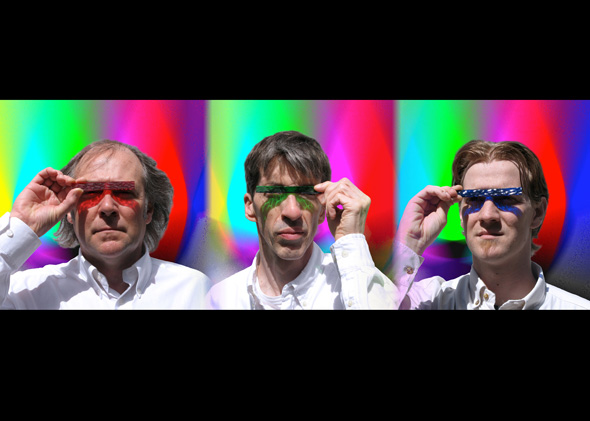 Eternal Encore
Shannon Linde - Multimedia installation
An interactive two channel video piece that attempts to recreate the moment in a concert when the crowd howls for the musicians to come back for an encounter. Basically it tries to create a sustained crowd orgasm.

The Renewables Project
Toby Smith - Video
Time lapse photography and video are used to examine the subtle shifts of moonlight on an alien landscape (or the Scottish landscape at any rate).

Happy Birthday to ___________!
Vesna Jocic and Jennifer Davis - Interactive performance
It's a birthday party in perpetuity for anyone who walks in. That could be hell on earth, or it could be great. There's only one way to find out. 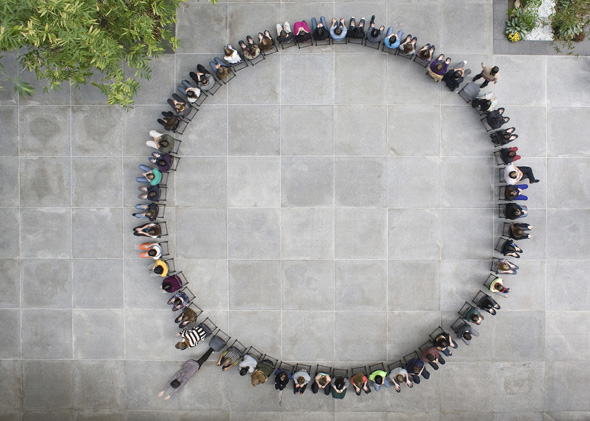 This area encapsulates the south and west portions of downtown. Conceptually, these exhibits try to deal more with the ideas of urban space and movement. They also feature a lot more chances to sit down and watch movies. There are 62 exhibits on offer.

THE DARK HOURS
Michael Trommer and Sona Safaei - Sound and video installation
A full year's worth of field recordings in Parkdale have been edited together into a tiny and distorted audio drama.

The Endless Pace (variation for 60 dancers)
Davide Balula - Performance Art (photo above)
Appearances aside, this is far more than a grand game of musical chairs. 60 dancers will perform as a human clock throughout the duration of Nuit Blanche, marking down the seconds, minutes and hours of the event.

1850
Sandra Rechico - Light Installation (photo below)
An intriguing Toronto-specific installation, Rechico examines the transformation of the city's shoreline by recreating "the boundary of where city once met water and now, the boundary of Zone C. A marker of this former shoreline will be recreated though an array of lights projecting an immersive wash of blue. The saturation of colour creates a hazy mirage of the water that once met the land."

The Potential of Objects
Lalie Douglas - Performance
The Montreal performance artist brings her objects to Toronto to destroy them and let them destroy themselves. 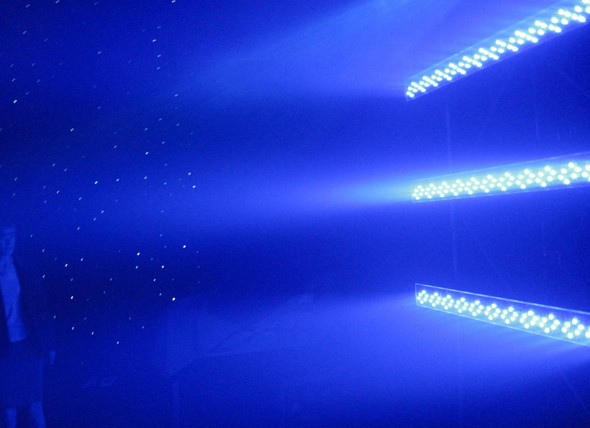 Singin' in the Dark
Film
Ever want to sing along to the tunes of famous musicals in a theatre? If you do, here's your chance. Otherwise, stay far away. 7:00 until midnight is kid friendly. After that it supposedly gets racier.

The Essential Cinema
Atom Egoyan and Guy Maddin - Multimedia installation
Both celebrated filmmakers offer their own distinct takes on the idea of the 'best' film of all time. But only listed because it's Guy Maddin.

Grindbox!
Group exhibition - Film
Watch exploitation movie trailers from the era when art films and trash were often indistinguishable (I guess they still are... so, the era when people made exploitation films that were more technically inept but also more intelligent than their contemporary incarnation).

Hair Matters
Toronto School of Art - Installation
Basically a giant hair ball that will grow as the night goes on and participants in the show dissect the relationship of people to their hair.

Built for Art
Group exhibition - Performance, sculpture, installation
401 Richmond opens its turn of the century factory doors so people can wander through the elaborate group show within. Featuring a teahouse and French music video from the 1960s.

All images courtesy of Nuit Blanche and the City of Toronto