Edward Burtynsky turns his lens toward the BP oil spill

I've been a fan of Edward Burtynsky's photographs for some time now. So, when I heard that he was showing new works on the BP oil spill at Nicholas Metivier Gallery, I marked my calendar. One can look at Burtynsky's work online all he wants, but his large-scale prints - in this case, 48 x 64 inches - really need to be seen in a gallery setting to appreciate just how remarkable they are. Technically perfect, they do that thing that all good large format photographs do: they reward the viewer who takes the time to examine the image from both a distance and up close. 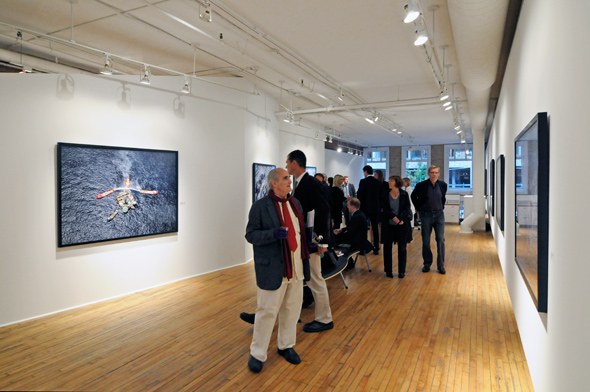 Burtynsky has taken advantage of this attribute of large prints since at least the mid 1980s when he was working on his Railcuts series, using the size of his images and the perspective of his camera to fashion photographs that appear to verge on abstraction - at least until one peers closely at them. The most obvious example of this is likely the image that graces the cover of Manufactured Landscapes, which makes a small nickel tailing look like a river of molten lava.

Although I recall some people questioning the honesty of that photo, the reality is that it's rather simple to figure out what you're looking at if you pay attention. There are, however, other reasons to criticize Burtynsky's previous work. His longstanding determination to resist taking a didactic approach, for instance, always struck me as a tad disingenuous. The putatively disinterested gaze of Burtynsky's camera -- itself indebted to the Dusseldorf school of photographers (and most notably Andreas Gursky) -- never convinced me that his work wasn't primarily a documentary project on the capitalistic forces that underwrite climate change. 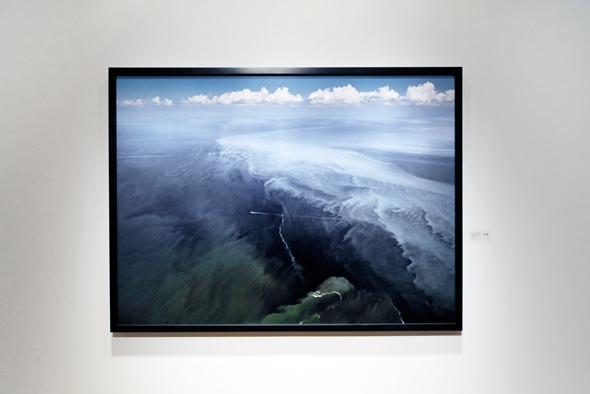 What's the problem with this? Nothing, really - but it does make it difficult to situate Burtynsky in the context of contemporary fine art photography. A rather notorious 2005 review of Manufactured Landscapes in the New York Times sums this up well. The reviewer writes, "Mr. Burtynsky's photographic vision is closer to that of National Geographic magazine. Though technically impressive and, because of its scale, important-seeming, it offers nothing about photography or about the world that we have not already seen in the works of countless other proficient, globe-trotting photojournalists whose names have faded into the oblivion of artistic mediocrity."

I don't entirely agree with the sentiments expressed above, but I think that they actually underscore what's so successful about this most recent work. As close to photojournalism as Burtynsky has come, the timeliness of this show makes this some of the most relevant work the artist has shown. It also confirms that Burtynsky has begun to abandon his resistance to taking something of a stance on the subjects that he photographs. 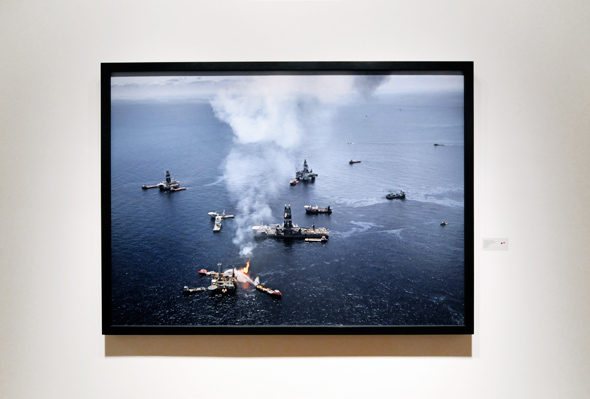 Once again, the perspective is from a position of distance and height - the photographs were taken from a helicopter - but the scale itself now plays a more critical role. What better way, after all, to communicate the size of the spill than with complementary photographs? Perhaps even more tellingly, the human element, when it's depicted at all, appears perilous in the sweeping seascape, perhaps powerless to curb the damage that lurks under the surface.

In this sense, these photographs also serve as a fitting metaphor for the project that Burtynsky has pursued for the better part of 25 years. It's not always easy to see or understand the consequences of global capitalist culture - be they environmental, social or economic - but the trace of this "progress" is always present in some way, available for those with the means and determination to see and share it.

Oil Spill runs from September 16 to October 9, 2010. It's accompanied by Pentimento, a series of Polaroid 55 prints Burtynsky made in 2000 when photographing shipbreaking practices in Bangladesh. 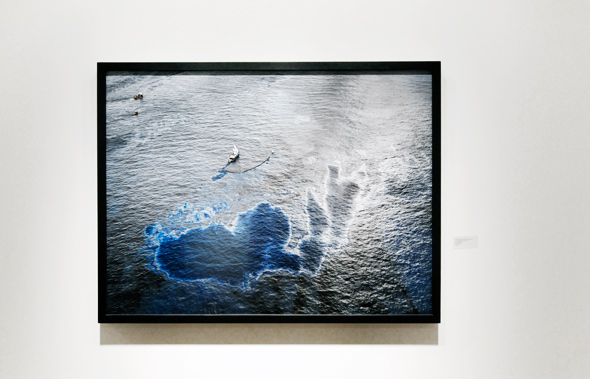 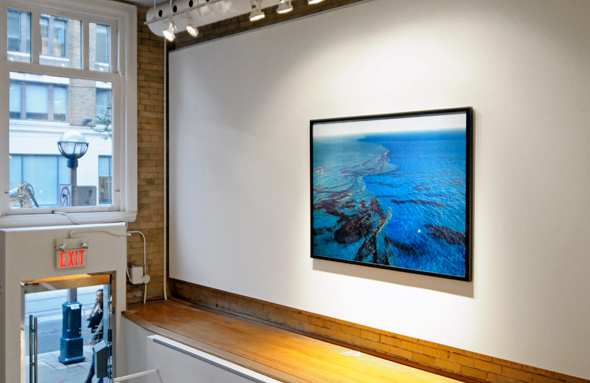