Dan Bergeron plays Show & Tell with "Faces of The City"

I've always thought there was something odd, and perhaps even depressing, about placing street art in a gallery. It's rather like going to see an animal in a zoo. Even more strangely, it's like going to see a pack of tom cats in a zoo. After all, when work relies so heavily on floating upon the filth of the urban surface, hovering with the power of a hallucinatory icon, it's hard to imagine what will happen when it's yanked into the sterile sphere of the gallery. So, I was a tad apprehensive about going to see Dan Bergeron's new works at Show & Tell Gallery.

Bergeron's work has become a common sight in the city, either under his own name or his tag, "fauxreel." His figures, culled from people on the street or in his life, have been cropping up on buildings for years. He is also known for his jabs at pop culture, smeared across billboards, or his own ventures into the world of guerrilla advertising, notably for Vespa. Perhaps because of all of these things, and contemporary marketing being what it is, whenever I read about the guy's work, it's usually referred to as "subversive" or "abrasive." I've never really found that in the work. On the contrary, I find a certain conviviality and even sentimentality. 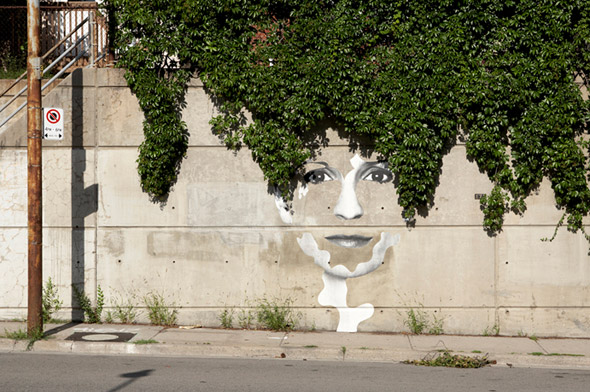 "Faces of the City" marks his first major show in a commercial gallery and, to his credit, and in spite of superficial similarities, he hasn't attempted to duplicate the street work he is known for. Instead, he has created works that are explicitly conscious of the very different aesthetic terrain which the gallery situation involves. This is actually completely in keeping with his method of creating images which are always site specific, as both (those on the street and those in the gallery) complement and examine the space in which they are placed. It's a show that seems to be asking for him not to be regarded as a street artist, and all of the things which such a label entails, but simply as a craftsman of aesthetic objects. In spite of his extensive body of work, in many ways the exhibition still has the feel of a first solo gallery show. There are good and bad things about that. There's energy and experiment, but also a certain coyness. Perhaps more disappointing is that he doesn't push the context quite as much as he could have. 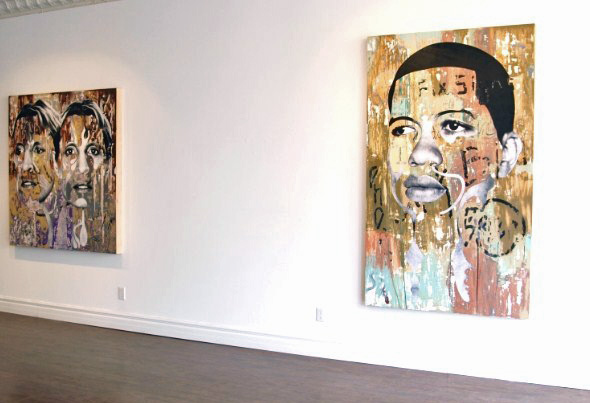 To anyone looking for Bergeron's usual mix of social commentary and comedy, you may be disappointed. Overt provocation is absent. That's not to say that the works on display aren't thoughtful, but what he's concerning himself with is largely a matter of aesthetics and little else. Encountering his work, either on the street or in the gallery, it is easy to forget that your looking at what are ostensibly conceived of as photographs. That's not because they have some remarkable transparency, but precisely because they don't. They're rather nice pictures. There's a unique balance that he strikes between the muted colours and the harsh but curving lines. Hidden between these two things are the occasional tags, details of skin, decisive drips of paint that blur lines. 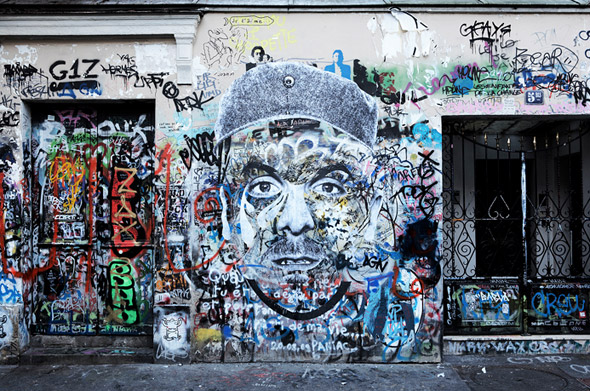 More than any of his previous works, these new pieces incorporate painting and play upon the limits of where the painting and the photograph end. Choosing to create a base rather than find one, he selected wood for his primary texture and then added layer after layer of paint. The colours are mostly subdued primaries with some silver, white and black thrown in. Each layer is scraped down to create a shifting patchwork of textures that work together as a grainy and fuzzy depth where the large format photo can be embedded. While they are images of faces, they aren't portraits. Instead, they're icons, though certainly not in the religious sense of the word. Their stripped down and linear quality makes them abstract. This lack of specificity allows them to possess the anonymity of composite characters, a kind of reduction to demographic generality. In other words, each icon is essentially a crowd figure, a face of the city in a swarm of mingling elements. 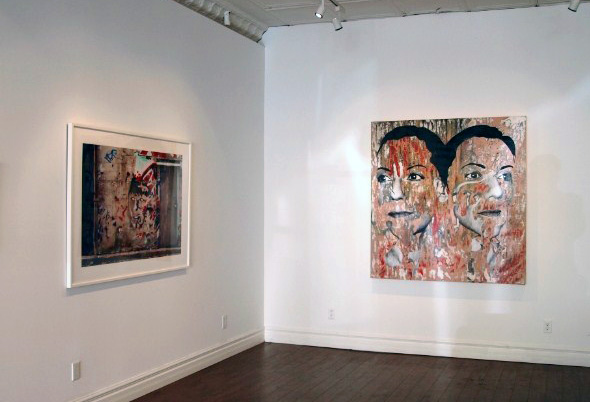 Images two and four are courtesy of Show & Tell.