A blogTO reader sent us a note the other day about a quirky art installation at Old City Hall and Queen's Park. Comprised of a series of paper boats with the words "boat people for prime minister," the piece is the work of the Paper Cranes art collective. Formed relatively recently, the group's modus operandi is to "pursue public art interventions."

I first caught wind of the collective when they identified themselves as the creators of the "Where's Omar?" pieces that popped up around the city. Although the group claims that they "do not espouse any one political position or stance," it's clear from their first two projects that they're interested in subjects that have proven to test the public's perception of otherness and that pose a challenge to Canada's foreign affairs policies.

As the reader email reads, "the paper boats set sail in the rough waters of xenophobic hysteria that flooded Canada after the arrival of the MV Sun Sea, a ship that brought just under 500 Tamil Asylum seekers from Sri Lanka to Canada." But, like the "Where's Omar?" intervention, the installations aren't didactic in any way. Although not phrased as a question, the odd suggestion -- boat people for prime minister -- doesn't actually prescribe a particular (realistic) way of looking at the arrival of the Tamil refugees. What its quirky wording does do, on the other hand, is serve as an occasion for the passerby to pause and contemplate the complicated situation. And when it comes to public art, that moment of thought is often the whole point. 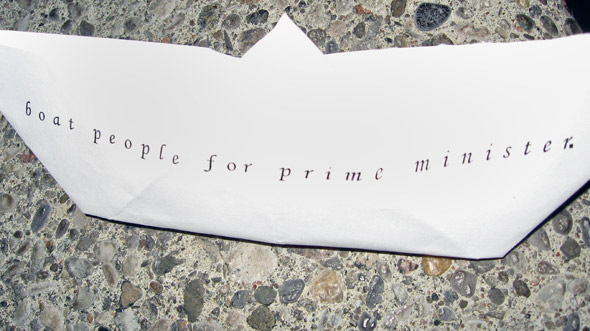