Even if the date isn't quite right, the occasional cold that's entered my bones suggests that summer is at an end. That made for a particularly chilly day of gallery jumping punctuated by the occasional stop for a bite or a beer.

Since it was the holiday weekend, many galleries took advantage and decided not to bother opening, which frequently put a bit of a damper on my usual stumble around town. We do get some consistency this week, however, thanks largely to some wildly divergent takes on what it means to try and work in three dimensions.

Group Show at Propeller from September 1 - 12 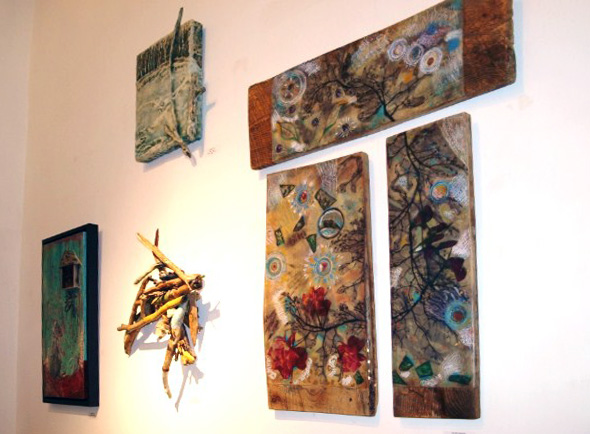 First stop: The opening of a large group show at the almost always interesting Propeller. I've always really enjoyed the encaustic medium. For anyone who doesn't know, encaustic involves working with beeswax which is pigmented and layered through painting and melting. It's a long intricate process which creates incredibly tactile and rich surfaces capable of complex shades and contrasts. It's an old technique which has spanned from ancient Egyptian portraiture to Jasper Johns' famous "Flag." 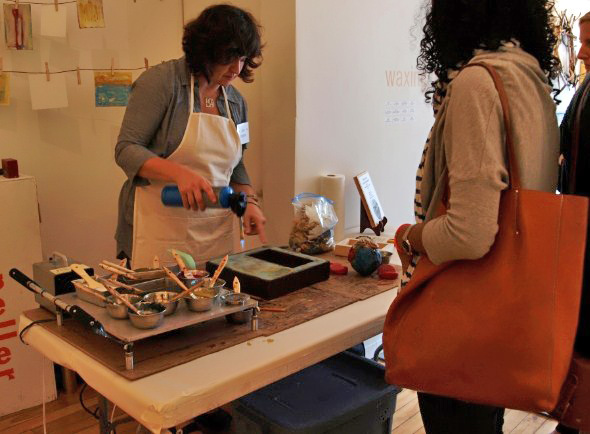 It's regained its popularity over the last twenty years or so, but, for reasons which escape me, people usually don't do anything terribly exciting with it. Maybe it's the giddiness of the surface it involves - there's just not much temptation to look for anything else. As a possible byproduct of this, there's a tendency to a folk-whimsical cuteness in a lot of it. When that isn't there, you'll often find a play on the superficial quality of the medium common to much abstract painting. There's a lot of pleasure and charm in all that, which shouldn't by any means be dismissed, but somehow I had the feeling that I was at the town artist's fair in the village where I grew up. They even had public demonstrations of how it's done. 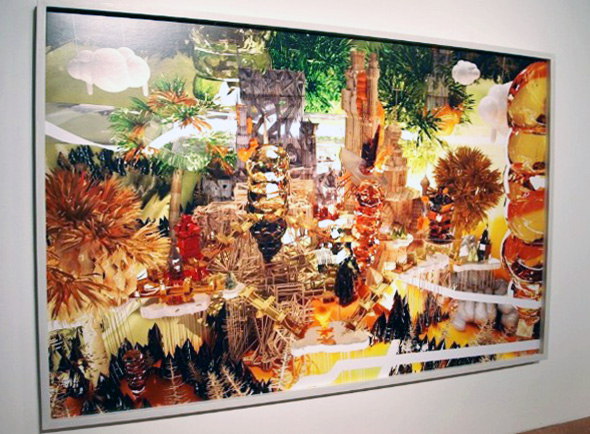 Angell Gallery is currently featuring a series of large scale images and a video by Alex McLeod. All of the images were generated and composed using computer programs, but manage to produce the eerie illusion that they are photos of 3D maquettes for the sets of dystopian sci-fi films from the late seventies (see lead photo). I kept thinking about "Logan's Run," but that's really not fair to McLeod, whose imagination creates a world that is rich with nuances all his own. His cold and layered images display a kinetic volatility thanks to their swirling design and the stuttered, sometimes shunted way he uses verticality, frequently bending it against itself.

Perhaps the most impressive thing about his work is the kind of surfaces he manages to generate, often full of reflections and jarringly textured, elements which are given a careful articulation thanks to his disarmingly eye-catching colour schemes. The experience of looking at them was augmented by a rather odd exchange between a gallery employee and an interior designer. She'd come looking for "edgy New York type stuff" to hang in the country retreat of some of her yuppie clients and thought that these works might be appropriate. Apparently visions of a nightmarish future and summer vacation go hand in hand for some people. 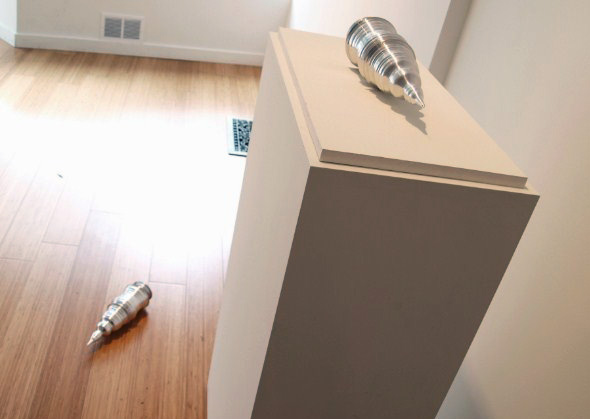 St. Catherine's based multimedia artist Duncan MacDonald provides an interrogation of the variance between sound and vision in his exhibit at the pm Gallery. The sculptural component of the show features three dimensional objects he's cast based on the visual mapping of sound recordings of objects falling. It's a fascinating game of ekphrasis, shifting from one medium to one another, from object to its translation to the translation of the translation back into an object. These objects pattern the wall as loops of sound fill up the gallery space.

At the far end of the room, there are three screens set up playing various video pieces by the artist. The slow and atmospheric videos question the nature of viewing and constantly displace the experience, forcing a kind of objectivity into viewing which provides an interesting contrast to the questioning of the object established in the sculptures. Some of the videos are created through the superimposition of the elliptical cross fades of films and their conflation with a soundtrack which does nothing to clarify them. More striking though, is the reddish pinhole style recording of a flock of starlings in the sky while its witnesses mutter banalities at a slowed down and distorted speed.

The frenzy of fall shows gets underway this week with renowned graffiti artist Dan Bergeron, AKA fauxreel's, new show at the Show & Tell Gallery; the much hyped colossal group show "The Dazzle" at Narwhal; the new video installation by Chris Chong Chan Fui and Yasuhiro Morinaga at MOCCA and, what promises to be a fascinating retrospective on the history of Conceptual Art in Canada at theJustina M. Barnicke Gallery.