Julian Schnabel arrives at the AGO

Famed American artist Julian Schnabel has mounted a massive show of his works in various media at the AGO. The show will be opening to the public on September 1, but the media were let in for a sneak preview of the gargantuan undertaking.

I was a tad nervous about going since I was sure his pajamas would be nicer than mine. So I decided to take my Maosist uniform out of the closet just to throw him off. The usual art journalist herd of people in black and badly jarring style choices were there in full force. We were loaded onto the elevators to be sent upstairs to meet the man and his curator. It was all rather nice as far as press conferences go and they played music from the Velvet Underground and the soundtracks to Schnabel's films as we waited. 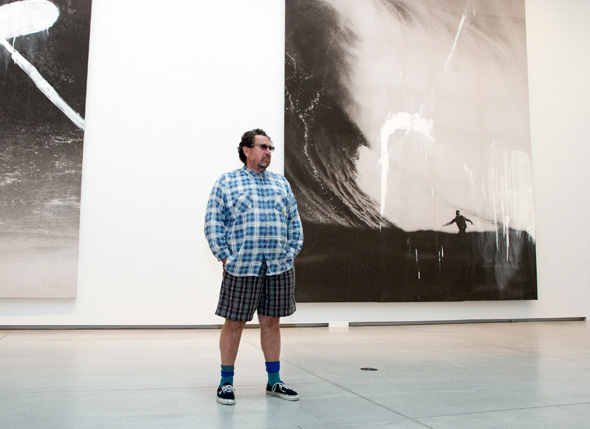 He arrived, not in pajamas, but in plaid shorts and a shirt that made him look like a lumberjack taking a vacation on a cheap cruise line. The curator, David Moos, came to the podium and tried comparing Schnabel to Reubens and Delacroix, casting him as the latest incarnation of the heroic painter creating monumental works. Of course, what he didn't say was that, unlike those two painters, who created monumental history paintings with grand intentions, Schnabel basically paints monuments to himself.

Schnabel was one of the major art stars of the early 80s when there was a controversial "return to painting" after it had supposedly died. Recognized as the beacon of the Neo-Expressionist school, he was lauded by plenty and his works were selling before they were even completed. He was a major player in the new art market of the Reagan era, the kind of artist that dealers dream of. His actual significance in aesthetic terms is still fairly dubious though (and I mean dubious, not controversial). 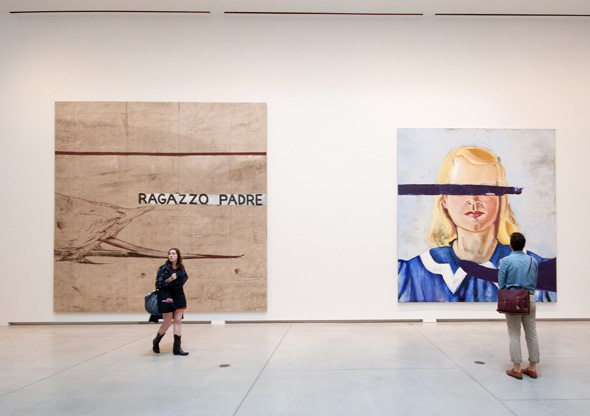 Known for his giant paintings made of cracked pottery, he fused abstraction with a kind of na誰ve figurative painting which posed itself at odds with the minimalism and conceptualism that had haunted art through the late 60s and 70s. While the market eventually tamed those movements, the kind of work which Schnabel helped popularize - depoliticized, aesthetically innocuous, subjective, decorative - was perfectly made for the new class of Wall Street tycoons and the return of conservative politics in America. His massive paintings are ideal for the foyers of corporations or the summer homes of CEOs.

Why he's significant now is largely because of the profile he's gained as a filmmaker, directing movies like Basquiat, and The Diving Bell and the Butterfly. No one involved in the exhibit seems to have any illusions about this, thus the name of the exhibition. And it's a big part of what the show is about. It highlights his involvement with the film world by showing several early paintings that contain explicit references to films and film actors. It also contains some rather nicely textured black and white Polaroid blow ups of actors like Christopher Walken and Mickey Rourke among others. 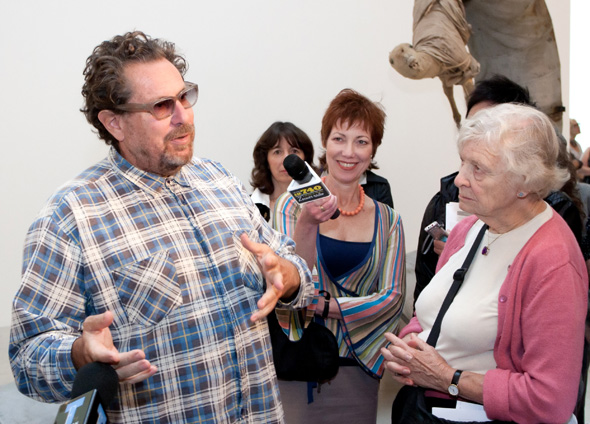 Schnabel has never had any problem promoting his own genius. At bottom, what Schnabel's work has always been about is casting himself as the world's greatest painter. There's something tongue in cheek about it when he likes to proclaim that he's the greatest artist since Picasso, but only to a degree. At best, his work is actually more like a second rate Picabia, but with greater marketing finesse. Whether all of that should be taken positively or negatively is pretty debatable, but what ought to count is the paintings themselves. 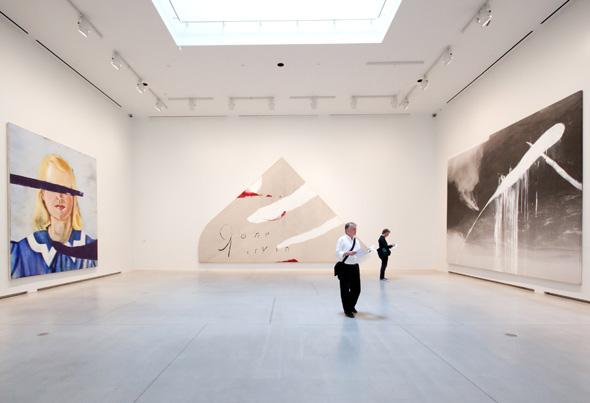 His work is all about scale. The bigger the better. The size is genuinely impressive, genuinely cinematic. His brush strokes are clear and huge. In fact, that's all they are. Scale is made overwhelming because that's all there really is. There's little actual content. The attentiveness and nuances of his massive strokes do little other than to announce his own ego. His paintings aren't much deeper than him stating that he is a great painter. All the same, the plate paintings (there were two of them hanging) are still nice and stand out as what's most interesting about his body of work. That's essentially because of their heaviness and their visceral, material quality, something which is lacking in most of his subsequent work. The fact that the earlier works are in a gradual state of decay only adds to their charm. 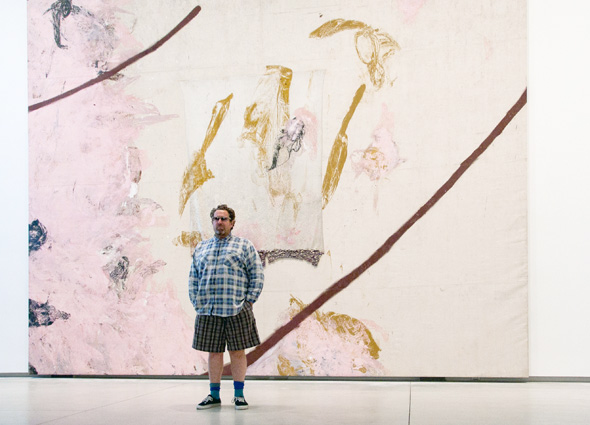 The other works, homages to movies, to surfers, to artists, are rendered in various styles, although size is still what trumps everything. For example, a few of the portrait paintings look like the kind of kitschy folk art you can find on cheap Portuguese pottery, only massively blown up and stuck in an ornate frame. The effect of scale on these images makes them slightly grotesque, but rather than charming, they have a weird glamour. It is precisely this element that also comes out in his portrait of Andy Warhol. Unlike the type of deathmask glamour which Warhol embodied though, Schnabel's is a sentimentalized glamour, removing ambiguity and replacing it with homage; removing the coldness and replacing it with a fuzzy coolness for nostalgic hipsters: an ideal move for the art market of today.