Is Toronto a nerdy city?

Twenty minutes into my time at Fan Expo Canada 2010, I found myself inadvertently siphoned off from the flow of regular foot traffic and fed into one of the long queues snaking through Metro Toronto Convention Centre.

It was here, amidst a sea of makeshift anime characters, bloated superheroes, and bloodied horror icons, that my attention was drawn to the young couple stationed just ahead of me in line. In contrast to the elaborate costumes of their fellow conventioneers, the couple's costumes were surprisingly conservative, and designed to capitalize on the Scott Pilgrim fad.

He was wearing a blue winter jacket with brown fur around the collar, a yellow tee, and grey slacks, while she had on a hoody, short skirt, and a bright pink wig cut in a choppy A-line bob. In his hand was a glossy 8x10 photograph of Firefly actress Summer Glau, and the snippet of conversation that carried over to me appeared to center on an upcoming autograph session with the Expo attendee:

"What are you going to ask her?"

"I don't know. Maybe ask her how she likes Toronto?"

"Please. Look around you. Toronto's cool because it's lame." 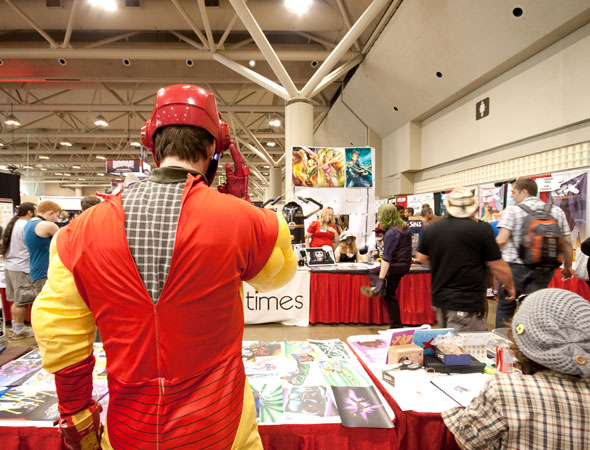 The exchange was brief, but it was enough to bring to mind some of the conversation that had been generated earlier this summer when Huffington Post journalist Lauri Lyons had anointed Toronto the new capital of cool. Quickly picked up by the local media, the designation had been received with the predictable mixture of surprise, humility and self-deprecation that is all too common in much of the press dealing with the city's self-image.

And while the general consensus was that Toronto should indeed be celebrated for its multiculturalism, extensive food selection and accessible arts culture, there was an underlying sense that "cool" was a bit of a misnomer for a city also experiencing a bit of developmental growth spurt and struggling with an infamous insecurity complex. But could that adolescent awkwardness also be the source of Toronto's charm? Is Toronto - home of Scott Pilgrim and the first public Zombie Walk - a nerdy city? 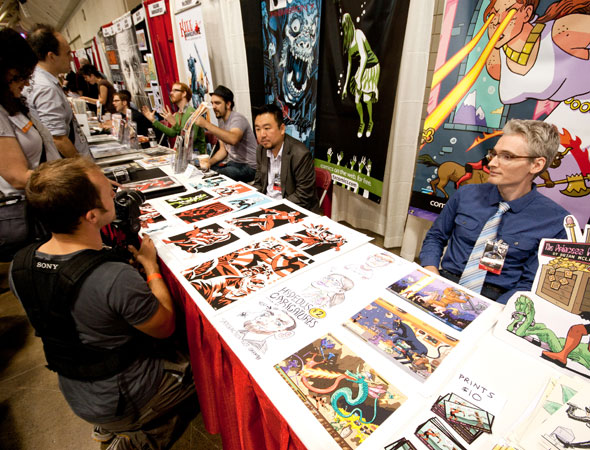 It has been said that there are two widely held and somewhat contradictory beliefs that inform Toronto's insecurity complex, and both were explored in the 2007 documentary Let's All Hate Toronto: that Torontonians are somewhat embarrassed by their city, and that the rest of Canada hates Toronto and its self-centered citizenry. 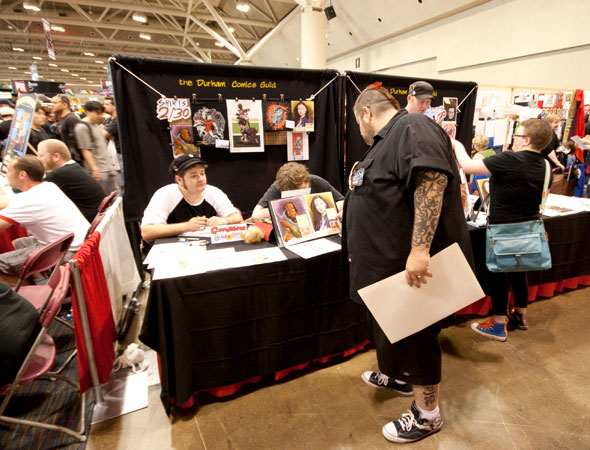 Both beliefs can be traced back through the city's uneven history to its humble beginnings as the Town of York in 1793, a rather inhospitable colonial outpost that stood in stark contrast to Ville-Marie, the bustling trade centre to the northeast. Indeed, whereas Toronto's early development was comparatively slow and often done on the periphery of the larger empire, the incorporated Montreal had been developed and nurtured as Canada's bombastic economic and cultural capital almost from its very inception. 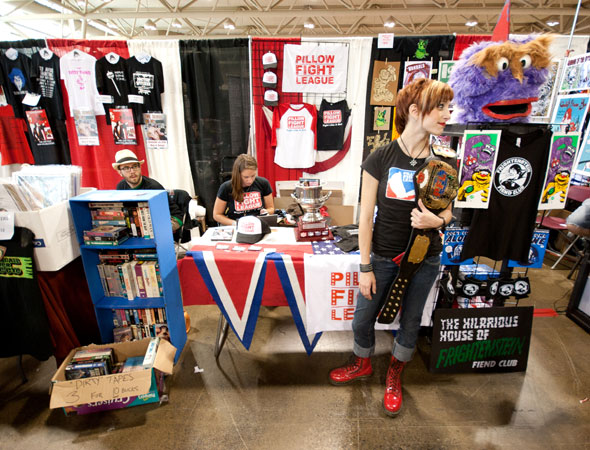 The city maintained this position until the 1970s, when the October Crisis and election of the Parti Quebecois resulted in the mass migration of many of the city's businesses and Anglophone population to a "second class" Toronto.

Almost overnight, Toronto the Good had a significant increase in economic development, and at a time when changes in immigration policy and the patriation of the constitution had resulted in both a citywide influx of racially diverse immigrant populations and a cultural severing from Great Britain. Suddenly, a mid-sized city in the midst of a severe identity crisis was thrust on to the world stage and expected to fall into step with larger and older metropolises. 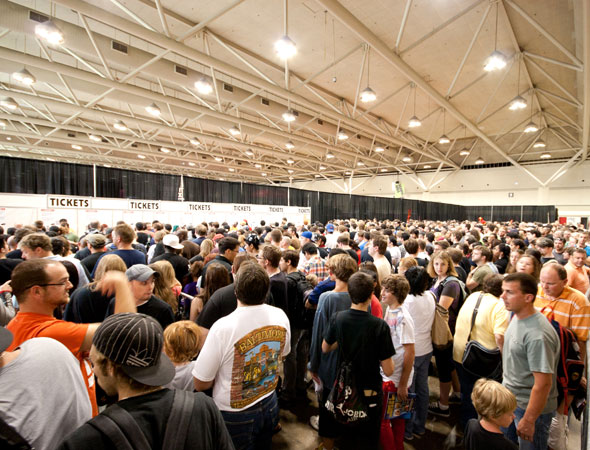 It was here that the city turned its attention south of the border, and began to develop a high-rise office culture according to the template put in place by the most famous North American city of the time - New York. This attention resulted in a shift from the colonial model to an American one, as well as to inevitable (and unfair) comparisons with the U.S. and a cultural distancing between Toronto and many smaller Canadian cities. 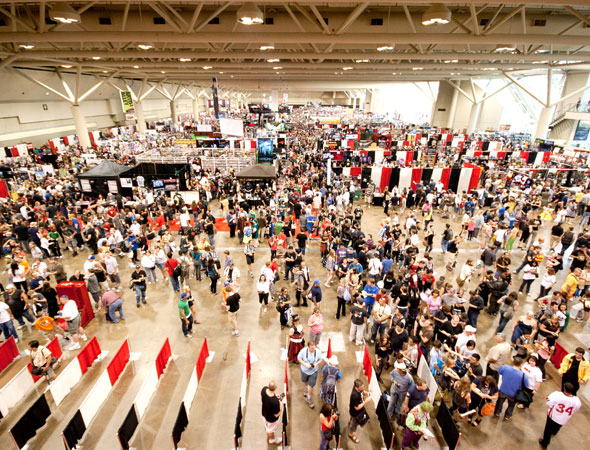 So in returning to the line up at Fan Expo, the costumed couple, and my initial question, how do these historical circumstances contribute to Toronto's status as a nerdy city?

When Edgar Wright's film adaptation of Brian Lee O'Malley's Scott Pilgrim graphic novels opened in August, it was met with middling box office returns and general apathy from the American public. Although a number of reasons have been provided for the poor showing, many Canadian critics remain convinced that the film's Toronto locales were not palatable to an American audience used to seeing the city play other urban centres.

In his discussion of the film's financial failure, Jamie J. Weinman of Maclean's Magazine argues against the idea that it would even be possible to replace Toronto as the backdrop, and maintains that the city is not only integral to the "feel" of the film, but is also a key element in the viewer's understanding of the lead character as a sympathetic underdog facing off against formidable (and often American) foes. 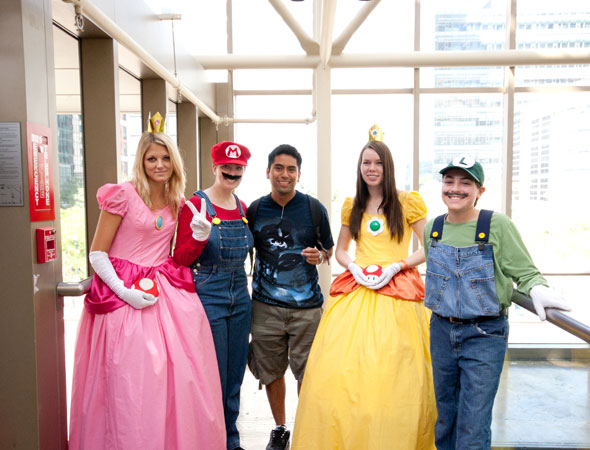 In effect, Toronto is not only allowed to play itself, but in playing itself becomes a sort of narrative shorthand designed to engender sympathy and gesture to nerdy insecurity. Toronto - with its position as a second tier city, its problematic relationship to the empire, its
internal growing pains, its antagonistic relationship to its Canadian peers, and its insecurities in relation to its American neighbours - is the quintessential nerd outpost.

Not long after the initial encounter in the line up, I ended up crossing paths with the costumed couple again as I doubled back through the convention centre. As I shuffled past them discreetly, a grown man dressed as Link from The Legend of Zelda smiled in their direction and waved. "Cool costumes!"

The young man's response? "Not really, but thanks." 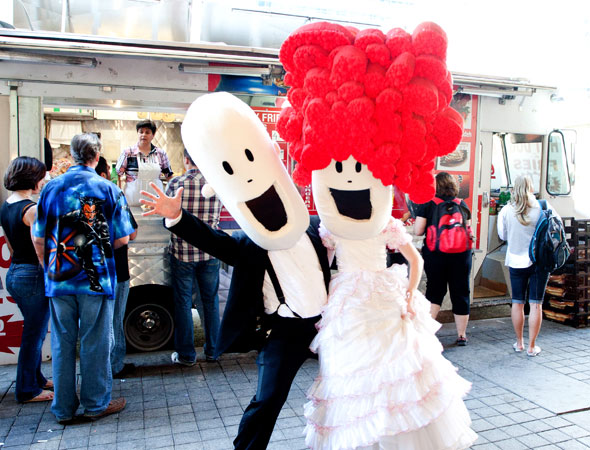