While many galleries have closed for summer vacation or to install their newest shows, the season continues with more thematic group shows united by various degrees of vagueness, and I check out relatively new addition to the Ossington gallery scene. 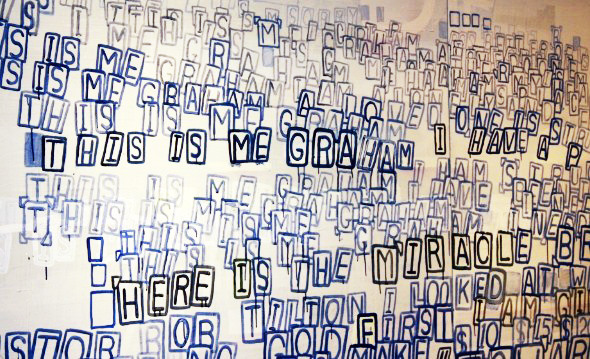 The new show at Clark & Faria examines issues of authenticity in pop culture in a few different ways. Graham Gillmore's large text paintings take their words from an evangelical sermon and transform them into a stuttering set of overlapping lines and broken rhythms.Douglas Coupland's piece combines Japanese TV performers with test patterns has the graphic potency of a well-designed cereal box. Meanwhile, Derek Liddington's photos reference the history of performance art in a mocking way.

Of course, if you don't get the references, they're not funny. And if you do... But the majority of the show, and one of its two rooms, belongs to 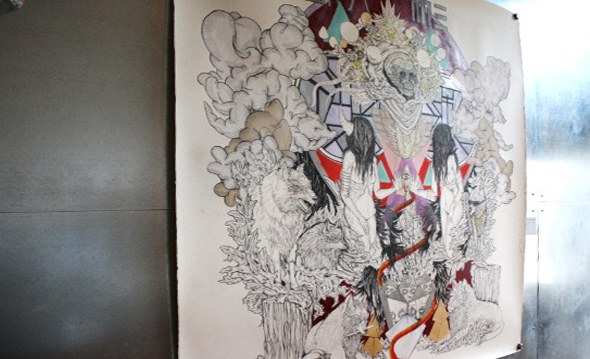 Karin Bubas and her paintings of the characters from MTV's "The Hills." Bubas' works provide a nice complement to her similar works using the cast of "Dynasty." However, perhaps deliberately, they don't succeed in striking the same level of kitsch. It isn't that they're more earnest, but that they move in a different direction, one which blurs how someone's relationship with the present can be defined.

Alexandra MacKenzie and Tomas Del Balso at Oz Studios July 22 - September 2.
As their name suggests, Oz Studios is a gallery space on the busy Ossington strip that just opened earlier this summer. It used to be a clothing boutique but has now been completely re-purposed into a gallery. So far, they have hosted two shows which have demonstrated their music-centric leanings. 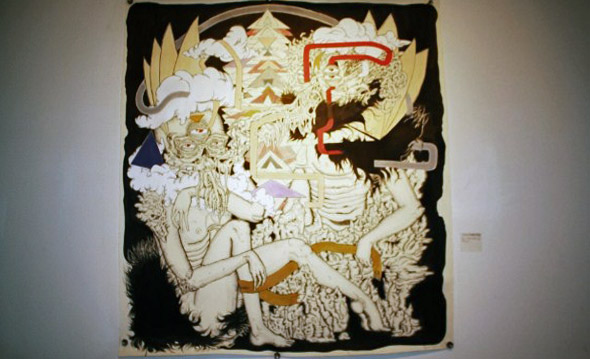 Currently on display are pen and ink works by the members of the drumming duo Romo Roto, made up ofAlexandra MacKenzie (first image) and Tomas Del Balso (second image). The large and rather ornate images fuse psychedelic patterns with some intriguingly grisly details. MacKenzie's work, in particular, demonstrates a nice sense of line and rhythm. 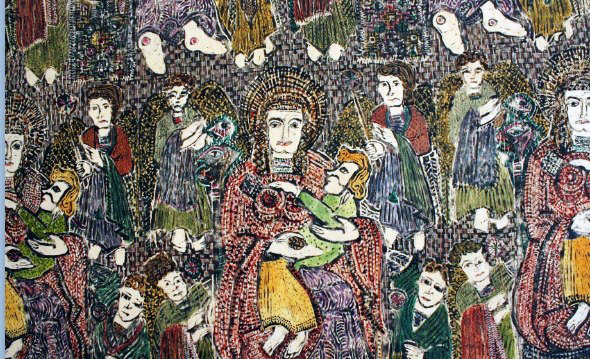 The group show at loop Gallery features artists working out the same theme in some wildly diverse ways. Each of them takes on the idea of the messenger, sometimes in ways which deliberately play on its iconic place in art history and sometimes in ways which are more esoteric. Rochelle Rubinstein's Biblically inspired, and intricately carved, works painted on wood sing with the complexity of medieval manuscripts. Meanwhile, Marc Adair displays one of his typically intriguing fusions of archaic art practice and personal reverie. By way of contrast, Patrick Jenkins has two animated short films on display accompanied by a series of Giclee prints. He recasts the angelic spectres that haunt the show as aberrant phenomena in a detective story.

Upcoming:
If you're looking for other things to check out this week, there is a large group show at Edward Day Gallery showcases the works of more than a dozen artists as they each do their own take on the idea of summer. If that isn't enough of a rumination on the season in its dwindling days, you can venture over to Gallery 533 for another ample group show on the same topic. And for something different, you can check out Genvieve Caron's rather gorgeous exhibition of images at the One 800 Gallery.