The summer continues to grind to its end with a few more group shows, including the whopping Square Foot Show, and I drop in on a mysterious gallery in the back alleys of Bellwoods. 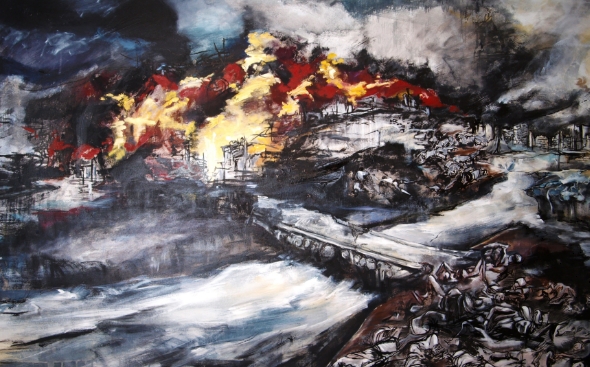 â¨Gallery 1313 is having the first of several group show which promise artists grappling with their, "sense of alienation in a world that seems too content to conceptualize irresponsibly and bathe in the facade of logic without the integral measures of foresight or hindsight." I got pretty excited when I heard that so I dropped my falafel and ran over. It doesn't seem like the most cohesive show until you realize that they are all working in styles that became quite unpopular in the 60s (in North America at least). This means that there are hints from a particular strain of Surrealism and some from a few strain of Abstract Expressionism. They don't ring like a return to repressed Modernism though; the styles are more personal than that, although the flaws are less interesting than that would suggest. But there was some decent ballpoint work and a few choice clumps of paint on a few of the canvases.

The Square Foot Show at AWOL from August 21 - September 5. 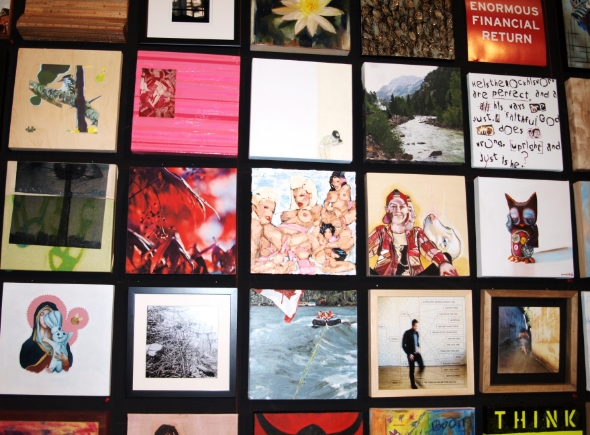 AWOL Gallery is now hosting their ever popular Squarefoot show. Artists from all of the world are invited to join in every year, as long as their submissions measure 12 by 12 and do not exceed 5 inches in thickness. Every one of these bounds was frequently tested in the plethora of works on display. Each work was on sale for $225 regardless of who made it and how. There were painting, photos, dioramas and some of the squares verged on turning into plush toys. The several hundred artworks were carefully arrayed on the black walls in a grid with no apparent sense of order. However, gazing about, I could discern a number of repeated motifs. 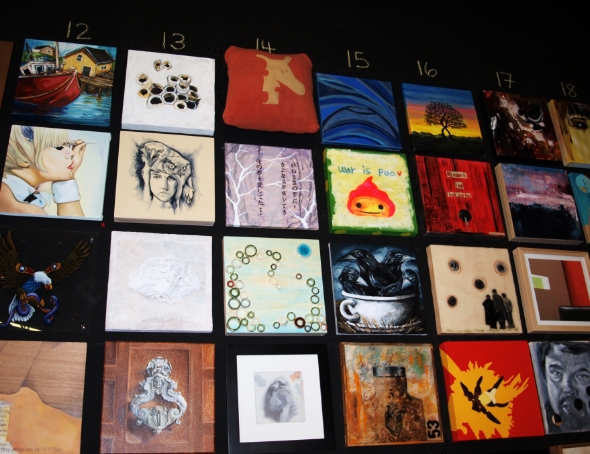 After that piece of information overload, I stumbled through the crowd of women buying art for their children's walls and around Ossington. Once I'd had a few afternoon eye openers, I wandered the alleys, doing my best to avoid listening to Maestro Fresh Wes as he performed in Trinity Bellwoods Park. I'm sorry Maestro, you kindle no positive memories, and it doesn't help that you were the only man on "Metropia" not to show your ass.

Deborah Walker and Dr. Flesh at The New New Museum for an undisclosed period. 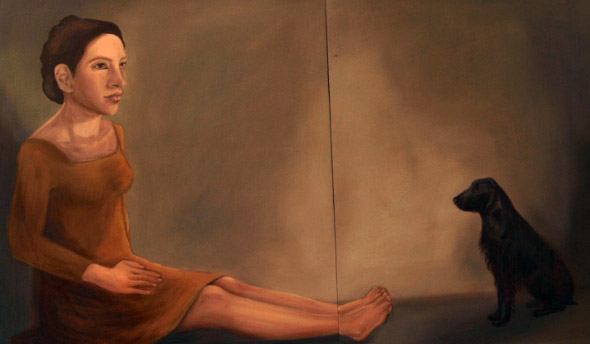 Down the rear lane of Bellwooods avenue is the reliably eccentric New New Museum (yes, it's supposed to be 'new' twice). It contained an intriguing mix of paintings, drawings and some sculptures which had been mauled by bears and were now resting in vitrines. The front portion of the gallery displayed some rather nice and quietly melancholy diptychs painted by Deborah Walker. Well, they weren't diptychs exactly, but a rectangular image broken into two squares. Each depicted a woman and some other figure, whether an animal or an object, rendered with a somewhat disorienting sense of scale. All of the images were painted in muted tones with soft edges and thick brush work. 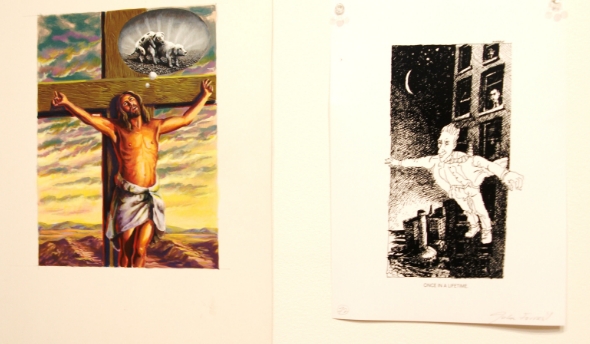 On a completely different note, the back of the gallery contained a fairly large exhibition of cartoons by John Forrest, or Jonathon Wood, or Dr. Flesh. The pseudonyms became hard to untangle, which was all part of the game, making the deciphering of the images somewhat slippery. These deceptively straightforward and garrulously vulgar cartoons depicted venereal disease in classic Hollywood, Jesus once again (but dreaming of puppies humping this time), plastic surgery gone awry and other juicy topics. It was full of double meanings and even triple ones here and there.

Upcoming:
The Art Gallery of York University's "Audio Out" exhibition of field recordings done by sound artists will be ending, as will "Cool Aid: Landscapes At The Day" at the Edward Day Gallery and "No Reservations: Food, Not Just A Four-Letter Word" group show will be opening at the Hang Man gallery on Tuesday.