Stephen Harper! The Musical, just like most productions with "The Musical" attached to it, is a cynical cash grab that preys on the unwashed masses. They practically say as much in the show.

So you'd think that the final product, which opened Tuesday night at The Second City, would become less of a self-parody than it is. But what I ended up having to sit through was an hour of no LOLs.

There are some attempts at clever writing and catchy songs here and there, thanks to the Second City's resident musical prodigy Jay McCarrol. But something went amiss along the way. I felt as if I was at a sub-par Fringe play. I expected much better from Canadian Comedy Award winners The Shehori Brothers. 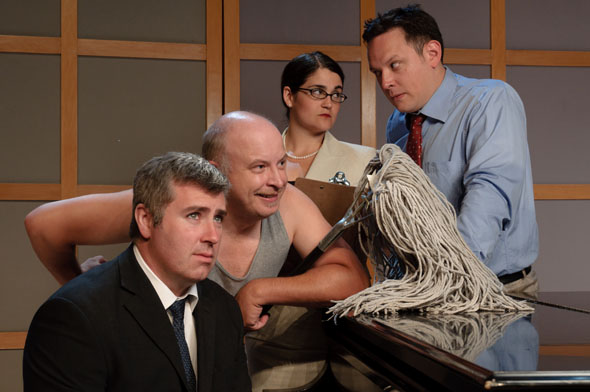 Perhaps after witnessing the success of Evil Dead: The Musical and having enjoyed the recent Legally Blonde: The Musical, I was expecting something a little more um... entertaining.

The show attempts to parody Harper's image-spinning by his PR advisors' idea of staging a musical. The show's talent includes Ashley Botting (The Second City), Trevor Martin (Evil Dead The Musical), Paul O'Sullivan (The Producers) and James Roussel (Air Farce) as Harper. They've all got pretty strong voices and loads of stage presence. It's a pity that the script they have to work with falls so flat.

It's halfway through the show and I'm yet to crack a smile. I begin to wonder if it's meant not to be a comedy. But they're certainly hamming it up on stage. The best line in the entire show comes when the cast-within-a-cast were debating on where to debut their musical production: Calgary, Ottawa or Toronto: "We just gave them a two billion-dollar block party!"

Perhaps a show like this really needs to exist closer to the election. Or maybe it just suffers from poorly written or poorly-timed comedic delivery. The show ends with a performance version of the YouTube "leaked opening number" that was deemed too racy for Broadway. But by this point, I wished they had began with this song and rewritten the rest as well. In the end, Stephen Harper! The Musical comes across awkwardly unfunny and a bore to sit through.

Maybe this show idea would be best delivered as a standalone YouTube video, not a full-blown musical production? But, as Harper's PR advisors say in the show, "Who cares what the media thinks?"