It's just about the middle of the summer, but it wasn't the busiest week for galleries in the city. There were still plenty of things to see though. This week I visited a new show by some well established Canadian artists, one by some names that aren't quite as well known and a fascinating collection of the known, unknown and unknowable all collected together in a kind of party in a mini crystal palace. 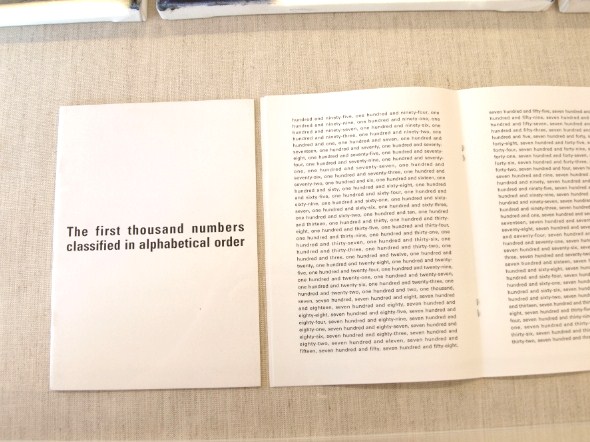 A show I wasn't planning to see, I just wandered into was "A to B" at MKG127. Curated by Micah Lexier, the show features a vast array of objects from local artists to Conceptual Art heavyweights like Lawrence Weiner. For good measure, it also includes random objects which were noticed on the floor while the exhibit was being put together. All of these things are placed in two large vitrines which have a curious formal mirror in the two black matte rectangles painted on the wall by Neil Campbell. The objects in the exhibit share a common interest with attempting to organize things. Many of them are removed from a larger series of their own and find new contextual significance in these fresh and random pairings.

It's a curious olio that provides a great place to get lost for awhile on an afternoon. "Charming" would probably best sum up the exhibition. That is, if it was supposed to be something to be summed up. But it's not. It's a show about the excess of attempting to summarize something. In the process of doing that, a splinter breaks off where fascination is created and full of seductive moments. There are minute twists everywhere to draw you in. Among the most fascinating objects in Michael Maranda's "Herclitus," which is fragments by the philosopher written in brail and resulting in a unique paper creation that blurs the line between a sculpture and a book. Also, "Arcade" by Spring Hurlbut, which is a set of antique cast-iron toilets on a shelf. 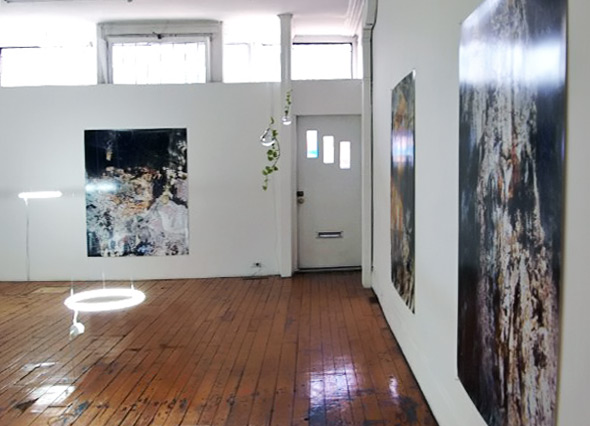 Paul Petro has the latest show by once infamous, now simply respected, Canadian artist Eli Langer. Langer's exhibit is a mix of photos of sap flowing from trees with lights and paintings set around the room to create a sort of art atrium. Halos of fluorescent light are suspended in mid air at various heights to reflect upon the black canvases which decorate the walls. There are a lot of black paintings in art history, of course, and they're almost always radically different from each other. Here, rather than black functioning as a vanishing point or abyss, it is used to make things appear in shifting forms. These paintings are textured with strong lines and a offer a high degree of reflection. As you move in the area around them, the surface alters, creating an animated pictorial space which oscillates between flow and a sticky solidity. 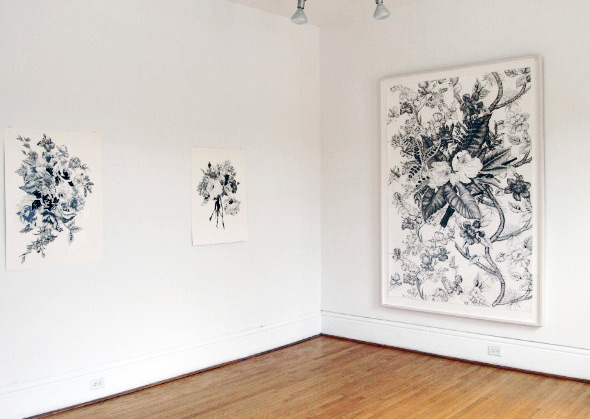 Continuing with some of the themes in Langer's show, upstairs you can see the new works of Jane Buyers. Equally performative, though in a rather different way, her works are fashioned from old textiles and photocopies of wallpaper. These are cut and pasted, or else re-drawn with graphite in elaborate, baroque bouquets. They are never decorative because they are not based on patterns, but rather on a certain sense of chaos which only grows on closer inspection. Many of the aggregates of blossoms are cut up in a way to make the seams show. These jagged marks, cuts and breaks within the blooms become readily apparent, breaking up the flow of the lines so that the eye is thrown back into the flux at the centre of the image. 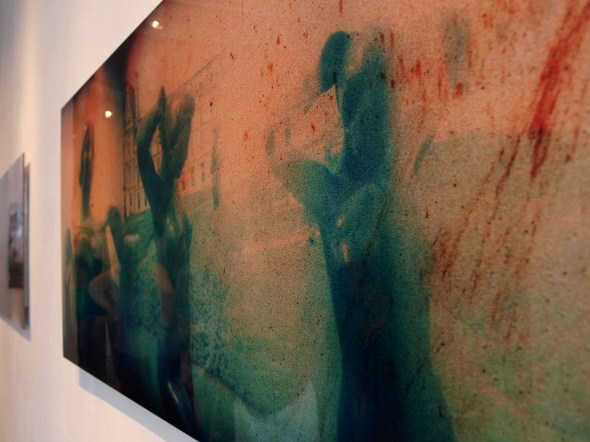 The new show at Loop Gallery shares a common theme of dreams, though each artists presents dreams of a rather different kind. Isabelle Hemard's paintings are mingled with balloon clouds that crayon tears that rain to the floor and turn into heart shaped rose petals. The paintings themselves are aggressively childish and, presumably, born from some personal mythology. Spare words are scattered around the swipes of paint. There's some nice play between pencil and paint. The works somehow manage to feel like they were done in crayon. 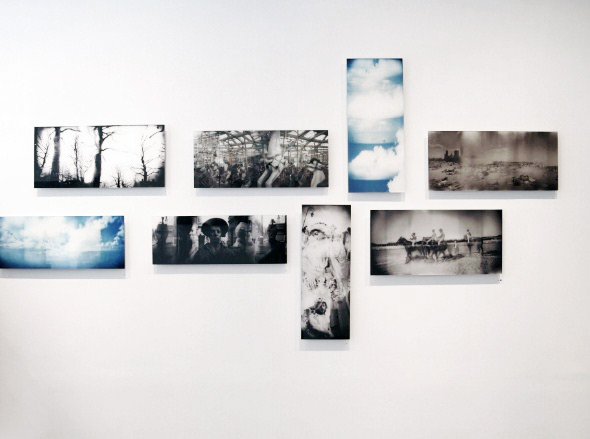 Also utilizing the aesthetics of a certain sort of deliberate de-skilling, Eric Farache uses a Holga to great effect, creating long horizontal images of his travels through Europe and North Africa. They come off more like haunted travel photography than anything else. Another strong point is his inclusion of technical mistakes, like the red fingerprints and smears of a scanner he used in creating some of his images, giving their surfaces an added level of texture and complexity. Eerily cinematic with a rich colour palette and a soft but distinctively tactile edge, they play off details and suggestion.

If you're looking for something else to check out this week, you can catch Seth Scriver and the slomotion's "Mad World," a mashup of drawings and paintings featuring characters from their imaginations and neighbourhoods at Katharine Mulherin. Later this week you can go down to the Distillery District and see multi-media artist Mitchell F. Chan unveil his newest show of paintings and kinetic works at the Engine Gallery. Plus, Gilbert Garcin will be showing some beautiful black and white photos at Stephen Bulger.