It's an eclectic batch of shows this time around. I spent a busy day jaunting around last Saturday before the TTC and the cops shut down and the entire downtown core, essentially turning it into its own little performance art show. Perhaps it was appropriate then that dystopia and social experiments would be one of the consistent themes to spring up over the course of the day. 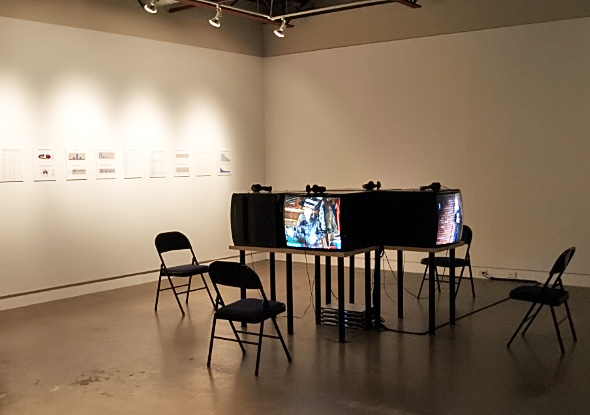 Awkwardness is one of the most wonderful things in the world, especially when it retains an explicable quality which is only aggravated by the attempt to explain it. This is something which performance artists over the last thirty years or so have been clinging to and exploiting, sometimes with genius. The exhibit at Gallery TPW plays with more than sheer awkwardness though. Borrowing from performance, video art and installation, the exhibition creates a set of intricate grids which play on how this awkwardness can come out.

The works by Robert Lendrum, Elizabeth Milton and Sheila Poznikoff, Kika Nicolela, Melissa Pauw, and Joshua and Zachary Sandler examine the relationship between the artist and the various audiences which they find, create or interrogate. Sometimes this relationship is playful, sometimes confrontational. All of the works are about moments where ambiguity intrudes on what would normally be clear and results in a tiny rupture. At turns absurd and satirical, the videos include young girls reading their diary entries and elderly women rehearsing theatrical performances. The videos are set up in various formations, but there's no sense of cacophony or information overload. Wearing headphones and watching each of the tiny worlds open themselves up, they provide both intimacy and discomfort in equal measure. 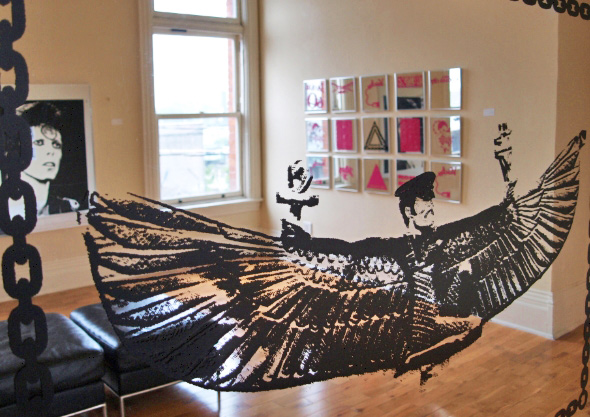 With the stream of Pride activities bursting out all over the city, The Gladstone gives their own unique offering which manages to be humorous and curiously subdued at the same time. Spilling across the second floor of the hotel, it showcases an eclectic mix of drawings, photos and even a tiny installation of mementos. Chris Cuerreri's photographic work stands out as does Stephen Andrews' wonderfully textural and thematically complex works featuring photocopies of fin de siecle homoerotica on canvas. Mostly, however, the show is a tribute to recently deceased queer art icon Will Munro. There is a small room reserved almost entirely for his work, a collection of emblazoned mirrors and snapshot grids made of some svelte men in underwear. My companion and I recognized a few choice asses as we looked over them.

Empire of Dreams: Phenomenology of the built environment from June 19 - August 15, 2010 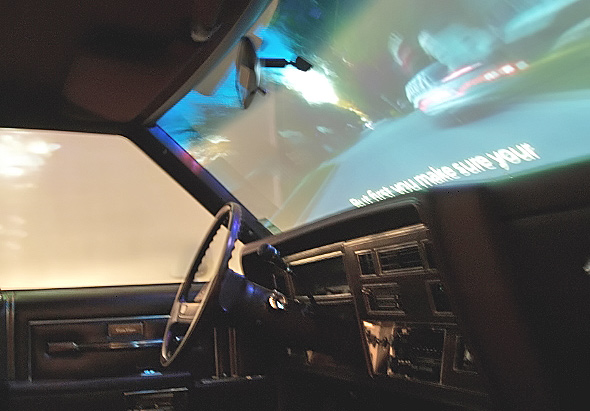 The idea of futurism in Canada is something I've always found fascinating, particularly if you happen to spend any time outside of its urban centers where it often doesn't even seem like the same country, let alone time period. Montreal is haunted by the specter of futurism. Its metro system was a paean to sixties' dreams of the future and now feels like a charming, though leaky, film set from that time. That's basically what I thought about when I was walking through the recent exhibit at MOCCA. There were uniquely Canadian examples of this warped futuristic dreaming. Of course, after the recent experience of "Fortress Toronto" during the G20, any attempt at a re-imagining urbanism can't be without allure.

Samina Mansuri has a lovely, large model of a futuristic city on the floor coated with roving lights and a grim ambiance. Like many of the other installation works present in the gallery, it was intended to question memory as much as anything. After all, all imaginings of the future are essentially ways of memorializing the present or the past. Many of the works come off like dystopian architectural plans and designs for film sets. This impression was extended with great nuance by David Han's "Margaret Learns to Drive From There to Here," an engaging piece which invited viewers to sit inside a car while what appear to be home movies are projected in all of the windows. The car essentially wears the memories of the past and technology is recast again not so much as a glance at the future, but one in the rearview mirror. If only their exhibit at the CONTACT Festival had succeeded in actually being this genuinely McLuhanesque... 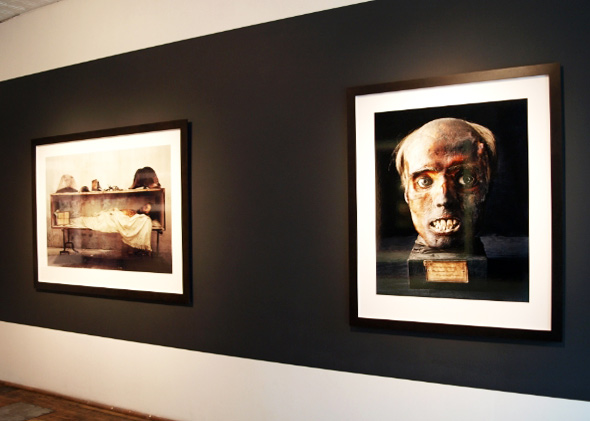 Like futurism, post-mortem photos have become a source of curiosity again. I assume the reason behind this is essentially the same - they are both defined by nostalgia. Unlike the Victorian, or current, penchant for highly sentimentalized displays of corpses, however, Jack Burman's show at Clint Roenisch was cool, clean and collected. The photographer has been traveling the globe for years to get his camera into mortuaries, medical labs and various other beacons of morbid memorabilia. His monumental photos detail the dead in various states of decomposition, each corpse trapped in a suspended moment thanks to mummification or medical science.

My partners didn't stick around because the pictures rattled them. I stayed. People who don't lose their tempers are easier to confront and I rarely lose mine. Rather than disturbing or repugnant, the pictures struck me as possessing a kind of appalling lucidity. Later, my companion returned and told me the pictures were art because they were disturbing. I thought the art portion had more to do with the colour scheme. I don't mean that dismissively either. They are pristine, careful and sensitive photos of things devoid of sensation.

If you're heading out to the galleries, you can drop by the ROM for their new show featuring China's terracotta army. People who worked on the show tell me it's extraordinary. The fact that it opened with a riot on its doorstep adds something to its appeal. There is also an intriguing new group show opening July 5. The New Management takes up residence on Queen West with a cultivation and dissection of mini-marts. And XPace hosts an homage to the carnivalesque with their new exhibit, "The Greatest Show On Earth."