This week, it's all about motion. Sometimes the art moves and sometimes it's just about moving, or even about not moving at all. 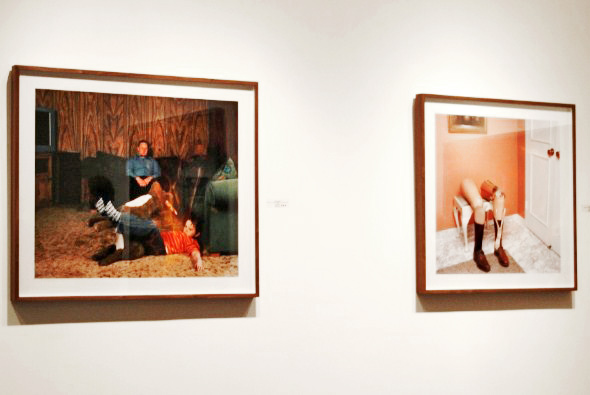 The new group show at Angell Gallery is dominated by some radically different takes on photography. Alex Kisilevich presents his immaculately staged works. They can best be understood as the photographic equivalent of an absurdist sitcom that never aired. His models are deftly posed in uncomfortable positions as they wait for an end that never seems to come. While his characters are trapped in a delay, the world that Derek Evans presents seems to be in the middle of ending. Evans' works are made of sculpted resin which is then backlit before being photographed and pieced together into elaborate and colourful large scale works that look like a fiery apocalypse. And Bonnie Baxter provides a rather different trip into the unknown with a few brightly coloured images of a mysterious woman wandering through vague territories. 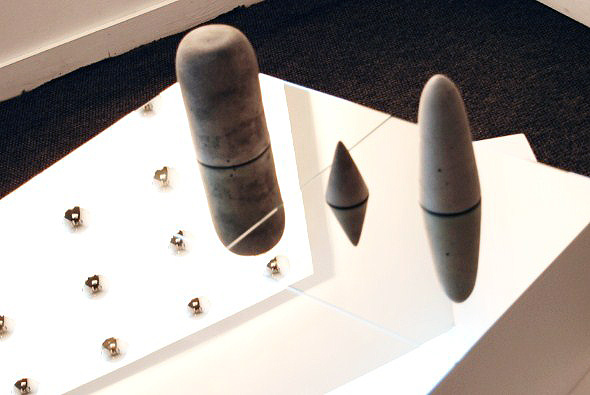 I hate summer and winter seems like a distant memory. This no doubt has an impact on what it's like to visit Annie MacDonell's show at Katharine Mulherin. Composed of sculptures and photo collages, with a heavy reliance on duochromes and mirrors, the exhibit effectively renders the chill and eeriness of Canadian winter. The collages look like photocopies from a distance but have the delicacy of pencil drawings up close. The sculptures, made of mdf and mirrors, represent icebergs. You can see the bottom of the iceberg beneath, but it is only a reflection, either of your face or the void in the room. The exhibit is all about that: your body floating through an expansive void. It almost a Zen take on winter. Which may be why the centerpiece is a large mirror covered in mirrored bulbs. It's in landscape format, but the landscape is only light with your body spreading across it but never really there. 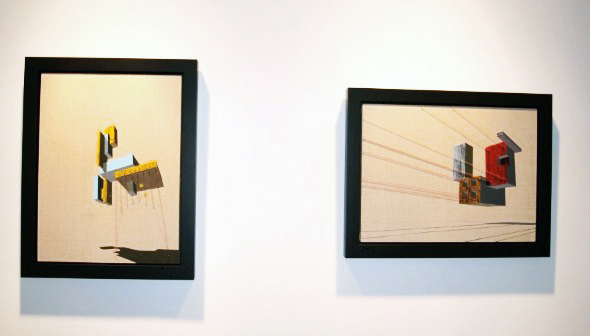 There was a rather different take on space by Mitchell F. Chan at the Engine Gallery. Chan creates a kind of kinetic painting which borrows from colour field and op art traditions and fuses them with an interest in architecture. It's an improbable kind of architecture he has in mind. One which isn't a space you enter into, but a space which changes with you. This is clearest in his triptych featuring the primary colours and a rapidly moving motorized string. As it swirls, exciting the retina, the colours dissolve and mix. Most of the paintings are automated so that the strings on them move, thanks to a system of pulleys which are timed according to the artist's breathing. This clearly provides the meditative undercurrent for the work, isolating a single sensation and expanding on its intricate nuances.

Other Shows
By the way, if you happen to be looking for your own pair of special glasses for viewing stereoscopic images, you can still get them at Gallery 1313. Just contact them for details. This week, you can still catch Blue Republic's "Weather Report" pieces at Georgia Scherman and Keith W. Bentley will be unveiling some of his new horse hair sculptures at the pm Gallery.