There's some shocking thematic consistency in my roundup of what's been happening in galleries around the city. Although it wouldn't be wise to place any of the following shows in the same room together, there was still a charming degree of complimentary concerns, if incompatible takes, on certain themes that appear to be hovering in the air. While meandering through the humid and sporadically rainy streets this past weekend, I was forced to wonder things like: do dolls have feelings? Can monsters be charming? And what everything you forget about would look like if it ended up being a curated exhibition.

- Daydreamers by Friends With You at Narwhal Art Projects
- Scream with Samonie Toonoo and Ed Pien at Justina M. Barnicke Gallery
- Holly Farrell at The Katharine Mulherin Contemporary Arts Project
- Fading Dreams by William Eakin at The Stephen Bulger Gallery
- Memory, History and Forgetting Part I by Kate Tarini at Toronto Image Works 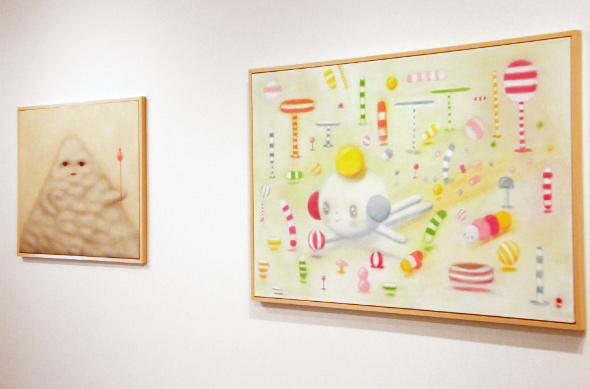 Narhwal Art Projects is presenting a solo exhibition by the brains behind the brand, Friends With You. Samuel Borkson and Arturo Sandoval III's large acrylic and watercolor works offer a set of their carefully designed characters to compliment the massive fleet of pseudo-spiritual commodities they sell. A heady batch of the products can be purchased at designer toy shop, Magic Pony, which just happens to be a few doors down.

The paintings are deliberately flat, but it isn't the kind of flatness you commonly find in pop art. Instead, the colours are hazy and diffuse, which only adds to one of the other things that separates them from pop art - there's nothing iconic about the figures. They are certainly distinctive types, if not distinctive characters. These creatures are gelatinous blobs that apparently have no organs other than eyes or mouths; circuits for the viewer to get sucked into. In this respect, the way the artists play with depth is especially curious, implying it in a way which adds more to the otherworldly dimension they are trying to present. The amorphous monsters have a seductive glare which is both charming and slightly creepy. They seem rather like a dumbed down version of Barbapapa to fulfill the desires of terrified parents everywhere. 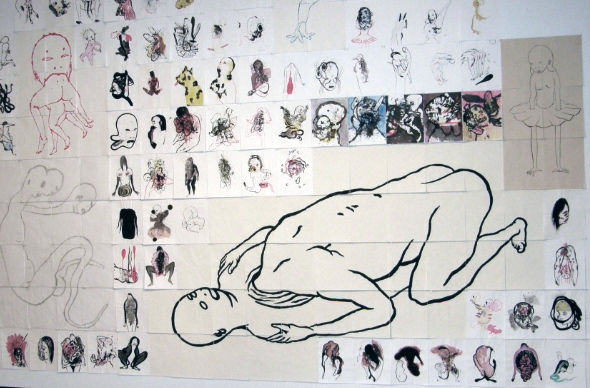 Slogging down the streets and north through the scents of Spadina, I found a radically different cast of creatures that still calls out to the world of children. If "Daydreamer" was a parent's fantasy about the good life for children, "Scream" could be the opposite. This exciting new show at the Justina M. Barnicke Gallery pairs drawing icon Ed Pien and soap stone sculptor Samonie Toonoo. It displays an array of nightmarish creatures who were not relaxing in a haze but engaging in a series of grisly deeds. 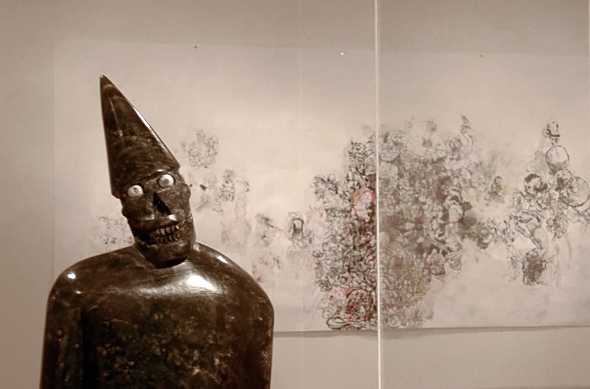 Toonoo's sculptures depict motley skulls and malevolent priests and provide a unique prism to glance through at the images of Pien's which carefully grid the walls. Set up in interrelated batches, they seem to resemble different levels of Hell. His figures undergo various metamorphoses, their genitalia blurring and body parts shifting as they literally tear themselves apart, turn into puddles of meat and then re-emerge in new forms. It's not all barbaric of course. Pien actually has a distinctive talent for using delicate and twisting lines to convey the pull of these metaphysical battles. Similarly, Toonoo's work evinces a delicacy of craft and attention to nuance that makes stone look soft and raw by turns. Filled with detail, the exhibit is equally visceral and probing. 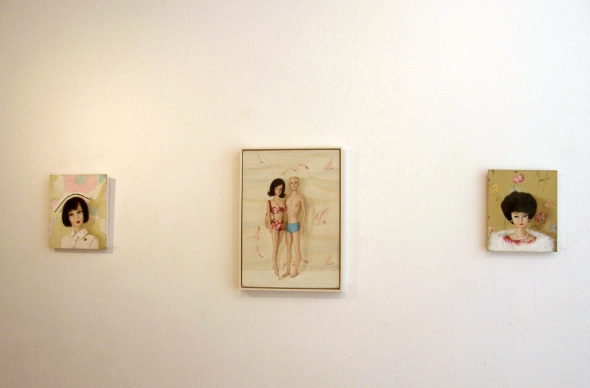 From this successful compliment of sculptures and paintings, I moved on to a set of paintings about a rather different kind of figurine - Barbie dolls. At Katharine Mulherin, Holly Farrell is showing her paintings of Barbie and Ken. Paintings of Barbie are actually a virtual genre unto themselves and have been common for decades. Farrell's are distinctive for their elegance and disarming serenity. It's almost like a Zen take on art nouveau portraiture. However, her paintings of Ken are far more impressive for the utterly unnerving degree of anxiety she imbues them with. While Barbie plays dress-up with ease, his shifts from one outfit to the next have a nearly schizoid quality.

It's a fascinating and intimate show which manages to raise all sorts of disturbing implications about the nature of viewership and empathy, as well as more art worldly type topics like: what constitutes a still life and what is a portrait? Can you even paint a portrait of a doll? If a portrait is meant to convey some hint or peek into a subject's inner world through their stance and gaze, what does a mass produced object relate? Of course, it's not as though Ken can feel anything, or does he? 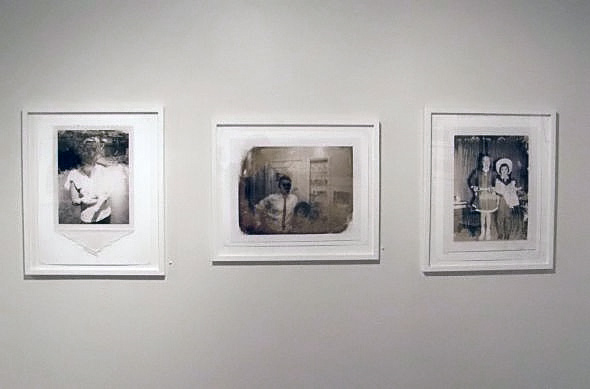 Like Farrell, William Eakin has made a mission out of scavenging from the vernacular and the world of 'low' culture. This usually means hanging out at Sally Anns and Value Villages to pick up random toys and photos, then photograph them and blow them up into little monuments to the everyday and the detritus that forms it. The images in the show at Stephen Bulger Gallery have been carefully culled from his collection of Polaroids from the fifties and sixties. There's no discernible theme within the pictures themselves. They're mysterious images, devoid of context or comprehensibility. They make up a museum of the days which have been forgotten by history and perhaps even by their subjects.

The greatest strength in the exhibit is that it eschews an easy sentimentality and injects the images with a unique immediacy. He accomplishes this by making the photos incredibly tactile. Not content to simply play a game of framing, he reverses the usual implications of photography. Rather than being about a depth that the viewer can project themselves into, he cultivates busy surfaces full of splatter, stains, scratches and fingerprints. These are all blown up to provide the images with added layers of life and complexity, blurring whether they are really images about events or images about images. 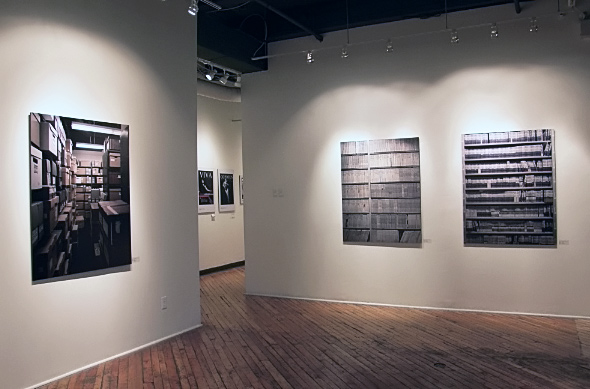 Archival fever takes a different form over at Toronto Image Works. Kate Tarini's documentation of some of the city's many repositories of information comes off somewhere between stills from an episode of "Hoarders" and Orson Welles' shamefully under-appreciated film of Kafka's "The Trial." Basically, they're photos of knowledge as anti-septic smut. 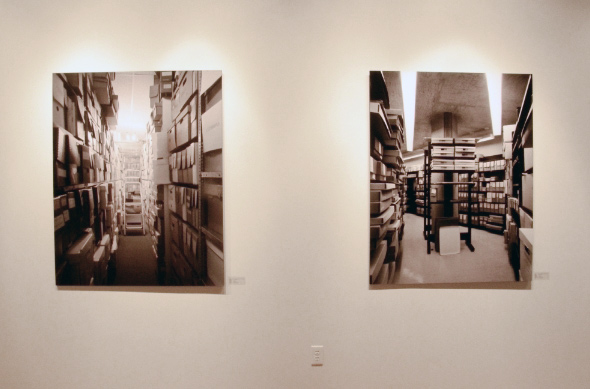 Her photos look at the carefully gridded and depersonalized world of information, captured and contained in alien codes. It's not the world stripped of fascination, but the fascination for an order that outstrips the world. A pornography of knowledge which is not a knowledge of anything other than its own accumulation. If power is this accumulation of knowledge, power is in essence the vacuity of things, less their essence as things, essentially as abstractions to be activated. It's not a desire for the specialized, but for their commonality and accessibility. In other words, it's a fantasy for plebeianism. The allure of this potential is what gives the carefully controlled objects their power. But more intriguing than that is the negative space which the images reveal. Much like the ambient space in porn minus its performers, there is an unnerving neutrality present.