Passing time on Flickr the other day, I caught wind of a new project that Toronto street artist Dan Bergeron (a.k.a Fauxreel) is working on. Unlike the wheatpastes he's well-known for, these new pieces feature hacked billboards and some pretty amusing advertising. Originally on three billboards in the west end of the city, the ads feature "Carl the Plastic Baby."

Carl, they tell us, "keeps life flexible," and doesn't produce "pee-pee or poo-poo." Not only that, "it's okay if you drop him."

Intrigued by this cryptic campaign, I sent Bergeron a note inquiring about the project and decided to check the pieces out for myself (based on the Flickr photos, the locations aren't too tough to figure out). Despite a few comments on Fauxreel's photostream that had me worried about their (continued) existence, I was happy to find that two of three billboards are still in place. The third, located in the Junction, has already been pasted over with a Fido ad (see below). 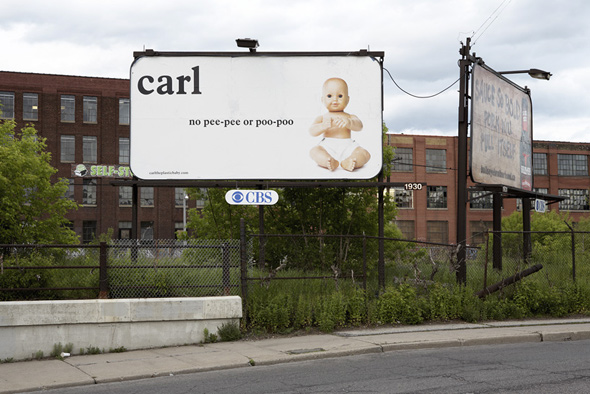 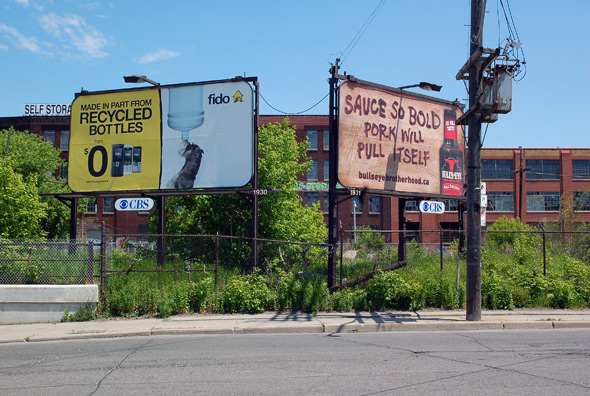 Below is the brief email correspondence we had about the plastic baby campaign and what it's designed to accomplish.

blogTO: There were some mixed reports about the existence of the billboards. Can you start by confirming that they actually exist?

The billboards are real.

Before I go any further though, I want to say that this project was created in a tongue and cheek way, and that I like babies and kids and I would like to have one of my own.

This project definitely rides the wave between comedy, social critique and an examination of advertising. I put it out at this time of the year because the CONTACT Photography Festival is on and their theme is Pervasive Influence.

I was going to try to propose a Public Installation or register as an Open Exhibition, but I thought that this series would do better to fly in under the radar. As much of my work is illegal, if Carl was really to be a pervasive influence it needed to do it on its own. (Ed. note: Hank Willis Thomas does have a billboard exhibition as part of CONTACT this year.) 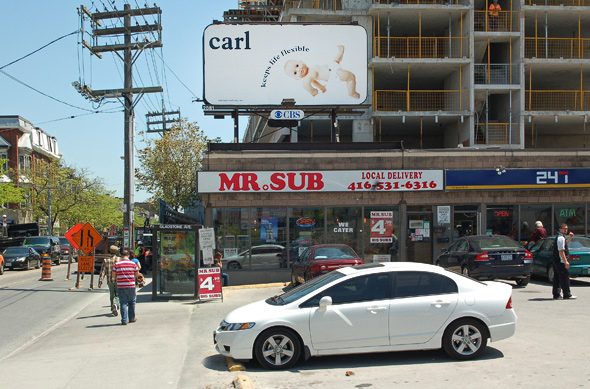 I get the sense that this project rides the line between comedy and social intervention. At its core there's a serious interrogation of the degree to which capitalism is caught up in the "right" to have children, to propagate, to spawn -- but there's also a lightheartedness. What would you say the goal of this project is?

As I wrote on my Flickr stream, the project formed from a couple of different trains of thought, which seemed to piggyback one another.

The idea first came to fruition when I thought about creating a product to sell to people that they didn't need. To figure this out I looked at my life and the lives of my friend's and family to see what we were buying.

Being that I am 34-years-old, and many of my friends have started families recently, I began to notice how many unnecessary products were being hawked at parents and how expensive they were.

This led to connections to celebrity adoptions and high-priced "ransom adoptions" of children from Russia and I was originally going to run with that stream of thought and create a line of Russian and African plastic babies that you could adopt to be just like Madonna or Angelina Jolie. I scrapped this after the earthquake in Haiti because I didn't want to take any shine away or place negative commentary on all of the kind, warmhearted people who have been adopting children from Haiti or other parts of the world and taking them away from some horrible situations. That would be too heavy-handed and was not the right approach.

After I figured out that I should create something baby related, I discovered that the average age of Canadians when they have children is rising, and that Canada is in the top four countries (widely considered second) worldwide in this regard, depending on whose statistics you believe.

What finally convinced me to do this project, and complete it in the tone that I did, was when I rode the internet superwave and discovered all the bizarre websites that are dedicated to baby products and babies in one way or another. You can see some of these in the links section on the Carl site.

Carl was created in the same vein as the unnecessary products that really have been created for parents to compete in our consumer based society. These aim of these products is to get parents to compete with one another in terms of who loves their children more because they have the more expensive stroller. So the project isn't so much an interrogation of the capitalist right to have children, but rather an interrogation of the capitalism surrounding having children.

I know it's predictable to ask, but are the babies really for sale? What's the price range?

The babies are for sale. Check on the website. More babies arriving daily.

Might it be fair to say that these babies are just the vehicle for a wider criticism of advertising? I see on your Flickr page that you point out that the idea of selling someone a plastic baby (something that they can't possibly need) is a prototypical example of advertising's purpose -- do you feel that commandeering ad space for this ulterior purpose might make people rethink the degree to which ads turn them into consumers?

If people were to look at these billboards and rethink how they have been turned into consumers because of advertising than that would show just how powerful advertising can be. I'm not sure that this will happen and I'm not sure that this is my point. It's okay to be a consumer. We need goods to do things in our lives and to keep the economy afloat as it exists. What I find interesting and provoking however, is that some of the products are useless and that these products are sometimes advertised to us at the lowest common denominator. I like playing with people's perceptions of what actually exists and why. 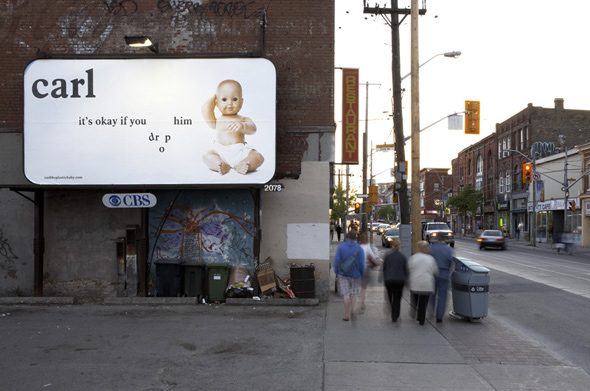 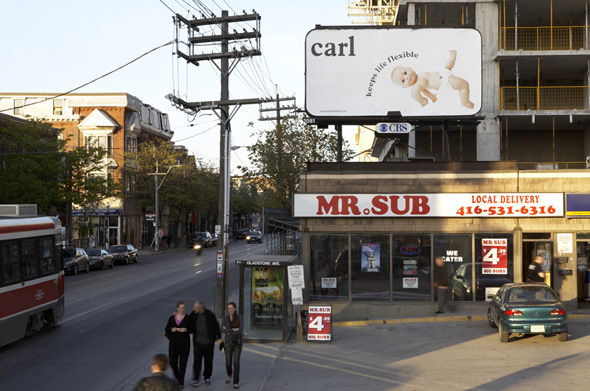 Photos one, three and four by the author. All other images courtesy Fauxreel.