While my first arts roundup for blogTO might be limited geographically, the breadth of what I saw this week in and around Dundas West defies the physical limitations of a single street.

Here's a summary of some of the stellar exhibits I took in.

This is quite a feat, particularly when you consider the detail and simple complexity of his work. Using his new Toronto surroundings for inspiration, Lagos has immediately responded to the Canadian cultural landscape with some of the most intriguing work I've seen in quite some time.

Lagos's mediums range from sculpture to installation and video -- and he moves seamlessly from one to the next. The genius of his work stems in part from his use of various materials to form part of the meaning of the finished product. (Marshall McLuhan's old adage, "The medium is the message" comes to mind when reflecting on Lagos.)

Take, for instance, the striking image that greets you in the window of the gallery's main space: a small tree-plant sits atop one end of a wooden plank; a stack of newspapers balances on the other. The whole piece rests precariously on the point of two boards of wood raised into a triangle on the floor: 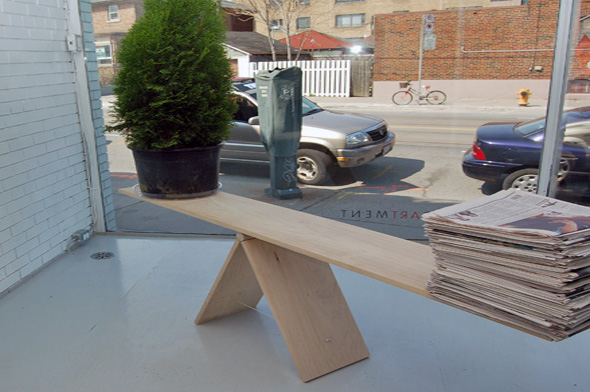 This work represents Lagos in a nutshell: the tree and its resulting paper; culture and nature perfect synchronized. As Lagos said during an artist talk on Saturday, it takes a lot of hard work for us to keep our cities' walls and buildings standing. It's not only human work, though -- our forests and plants play their very own, quite crucial part in keeping our modern world running.

Although Lagos might not be saying anything earth-shatteringly new, the way he presents his ideas is earth-shatteringly original in its clever simplicity. His work is so accessible that you can see a piece like the one described above and instantly understand Lagos' point.

Another example of this is an installation of books that Lagos displays against a wall in The Department. The books are stacked in an arc, with one pencil placed expertly in the leaves of each book. The stack is compiled completely of architectural books, and the whole thing would tumble to the ground if even one pencil were removed. I don't have enough room here to go through all of the different meanings that are conveyed by this work, but, the tenuous relationship between man 's rendering of structure and the materials that man uses to construct comes to mind, for one. 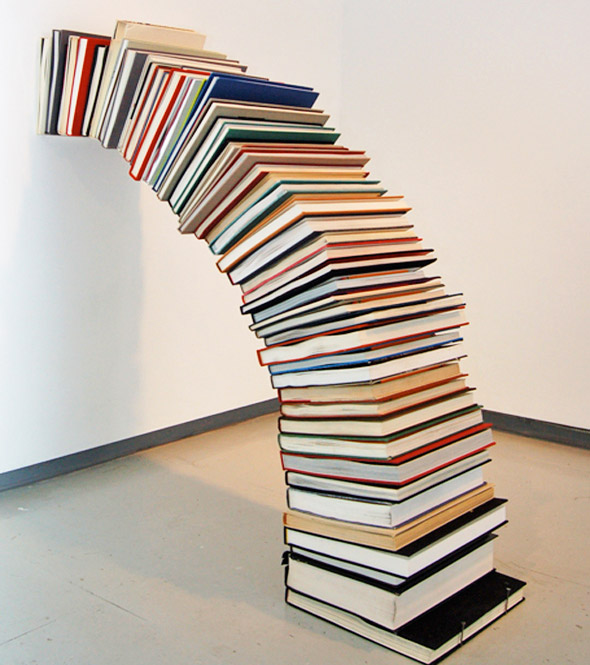 Perhaps the most mind-blowing piece is the part realistic, part fantastical looking tree trunk placed in the middle of the gallery. At first glance, this piece looks like a lovely prop for a staged production of A Midsummer's Night Dream, or some other wooded fairy tale, and nothing more. After taking a second look, though, and feeling the piece, it becomes clear that it's made out of newspaper. The paper's been burned in a grinder to get the perfectly shaded browns of an actual tree trunk. 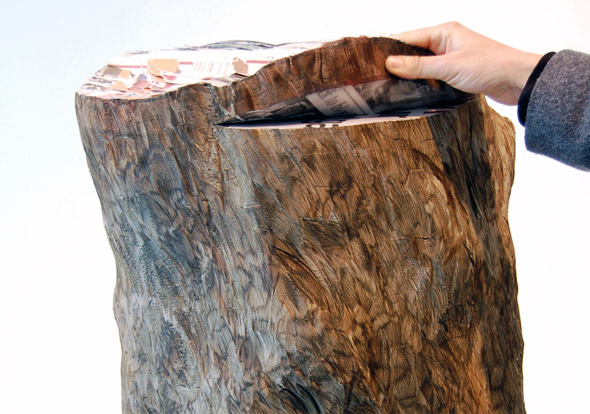 Harmonizing Forces is showing at The Department until April 25, 2010.

I was lucky enough to get a guided tour through the show, and I gained extra appreciation for Lamarche's works by hearing about the story behind each one.

First, the "O" drips. As with almost all Lamarche work, the negative space behind the letter "O" matters just as much as the form of the "O" itself. Fly drips pop off the page, highlighting what's "not" there in the shape of our human typography. 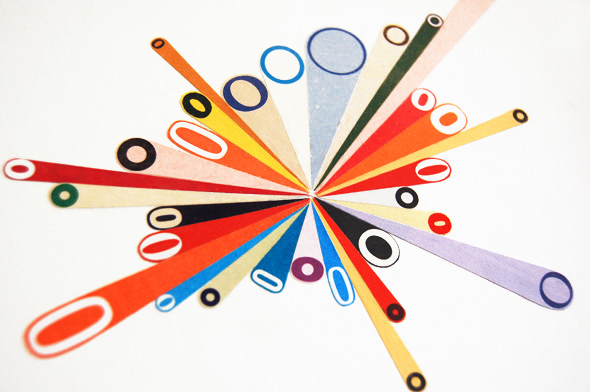 I'm partially drawn to Lamarche's work because it has a retro '80s feel, and the '80s always make me feel all cozy and cool, like I did when I was eight, watching Shira, Princess of Power on the couch, downing Lucky Charms, wrapped in a Rainbrow Brite sleeping bag. But Lamarche takes it one step further, crafting his collage work entirely from vintage paper circulated in the '40s, '50s and '60s. This gives everything an extra retro twinge, and it makes for colour combinations that you just don't see these days because some shades are just out of print (or they've been weathered by time).

It can take a long time to collect enough material for a single piece, so each work can take years to complete. This is especially true for Lamarche's word art collages, which are composed entirely of paper remnants from other works. Unlike works like the "O" drips or the below "A" shapes, 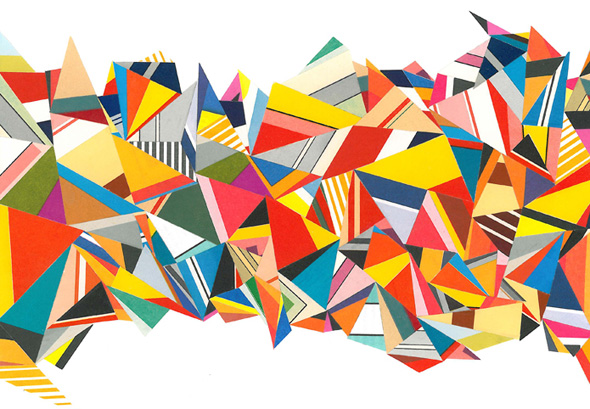 Lamarche never knows what he's going to make with his remnants until he gets the process going, so it's even more exciting to see the results. 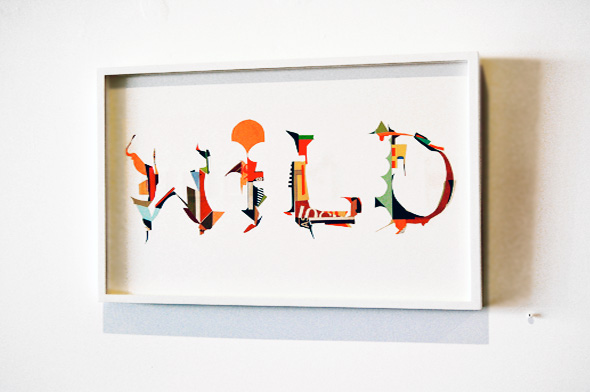 Also worth a mention is Justin Green's exhibit Romancing the Sackcloth, which is running alongside Cut to the Chase at Show & Tell. Green is a cartoonist by trade, but he also made a career of sign painting when times got lean. This series was inspired when he had to clean up an accidental painting spill with burlap. 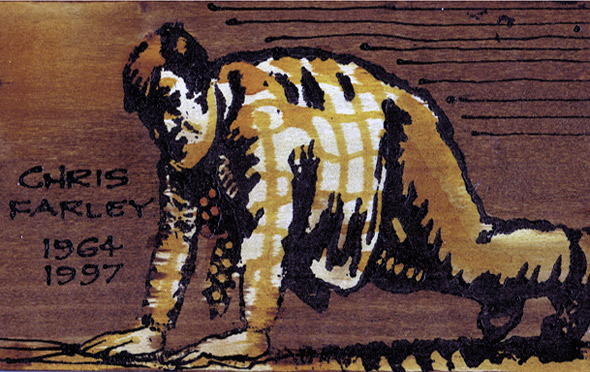 You can catch Cut to the Chase and Romancing the Sackcloth at Show & Tell until May 2, 2010.

Zanatarash and Série Noire at LE Gallery
Le Gallery's small space is home to two big shows this April. Romas Astrauskas' Zanatarash is a meditative show that consciously highlights precise use of colour and the humble discovery of shape. 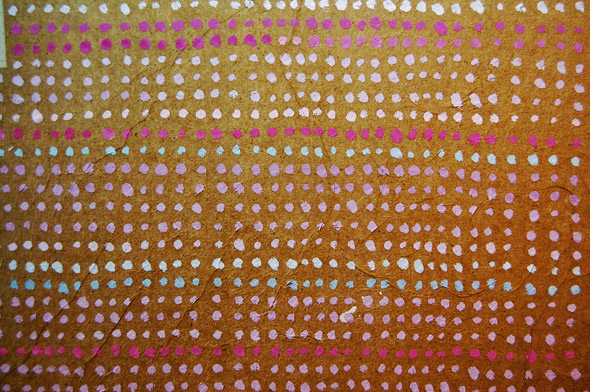 Like Justin Green's discovery that burlap makes a great canvas, Astrauskas realized that a random piece of brown paper, a cut-out remnant that had fallen to the floor, left over from another work, can make an entire show. Inspired by this piece, Astrauskas replicated it several times over and got to work. 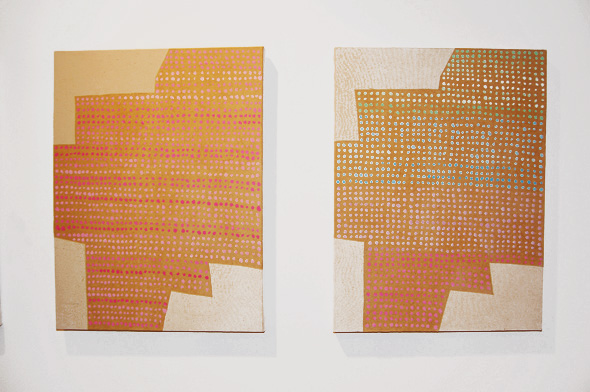 The show is framed with the following Proust quote: "I felt that these celestial hues indicated the presence of exquisite creatures who had been pleased to assume vegetable form and who, through the disguise of their firm, comestible flesh, allowed me to discern in this radiance of earliest dawn, these hinted rainbows, these blue evening shades, that precious quality which I should recognize again when, all night long after a dinner at which I had partaken of them, they played (lyrical and coarse in their jesting like one of Shakespeare's fairies) at transforming my chamber pot into a vase of aromatic perfume" (In Search Of Lost Time). 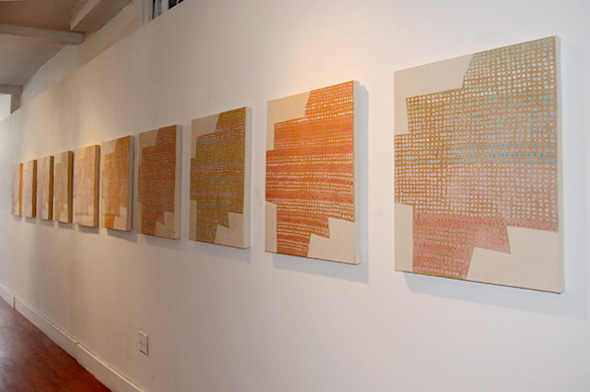 Fitting, no?Finally, don't miss out on Québec City-based artist, Nathalie Thibault, who is showing Série Noire in LE Gallery's backspace. Although Thibault is an abstract painter, her style melds well with Astrauskas's; they are both conscious of the use of colour and mark. Thibault accomplishes the same effect as Astrauskas -- the celebration of form and colour -- only in a less controlled way. 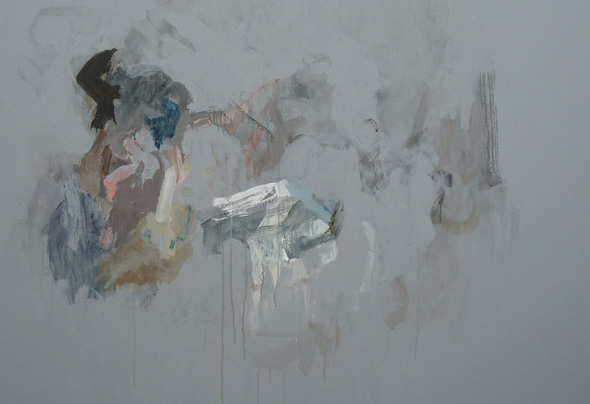 Also on the Agenda
In-Site Toronto
Six new art commissions are now ready to be viewed online via Wireless Toronto, our city's very own free Wi-Fi network. All you have to do to participate is sign in to Wireless Toronto at one of 35 hotspots, and the images will automatically appear. I am personally familiar with the meticulous quality of one of the featured artists, Fedora Romita, who has created an interactive piece about Dundas Square. Not only is all of the In-Site Toronto work of a high caliber, but this project speaks volumes about the future of the city's wireless network and its ability to intersperse visual art into our daily lives.
Produced by Year Zero One and curated by Michelle Kasprzak.

Mars-1: Infinite Tapestry
Mario Martinez, also known as Mars-1, takes his background in Fresno street art and transfers it beautifully from urban landscape to canvas, paper and wood. Influenced by the surreal and the abstract, Mars-1 channels his vision of the world in which live into something out of this world. Check out the Infinite Tapestry website here.
Meta Gallery, 124 Ossington Ave., Wed.-Sat. 12-6, Sun. 12-5 until April 25