The Art of Google Street View

Since the launch of Google's Street View, hoards of people have marveled at the intriguing, wacky and even beautiful scenes captured by the city-mapping camera. And yet, for the most part, continued interest in the feature seems confined to bouts of procrastination and/or the gathering of travel information (both local and otherwise).

While there's little doubt that there are worse ways one could engage in both the former and latter, recently I've noticed another way that these virtual cities are being put to use. More and more artists are undertaking projects that rely heavily on Street View.

Not to be confused with the plethora of articles and websites devoted to sharing strange or humorous incidents captured by the now highly recognizable camera-car, these projects go beyond the comic and the bizarre in the hopes of shedding light on the world at large and the complicated role that Google's putatively benevolent information gathering plays in our understanding of it. 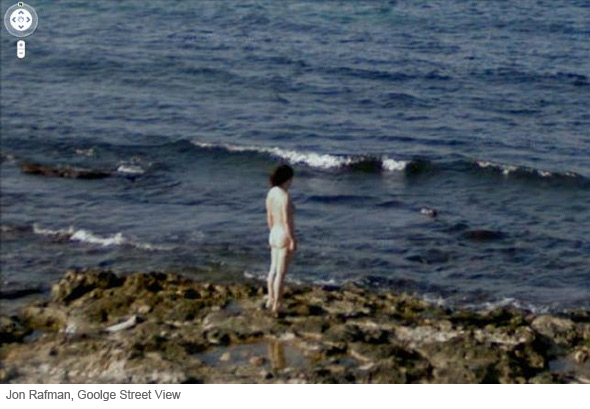 No doubt the best example of this is Jon Rafman's "The Nine Eyes of Google Street View," an excellent series of images that reveals both the eeriness of this new form of surveillance and its artistic potential. For Rafman, "this way of photographing creates a cultural text like any other, a structured and structuring space whose codes and meaning the artist and the curator of the images can assist in constructing or deciphering."

Also fitting this description is the work of Hong Kong-based photographer Michael Wolf. An artist with a fascination for architecture and the urban environment, much of Wolf's photography has documented the density of modern cities. With his most recent series, however, he's shifted his focus in order to investigate the photographic tradition and iconography of Paris. 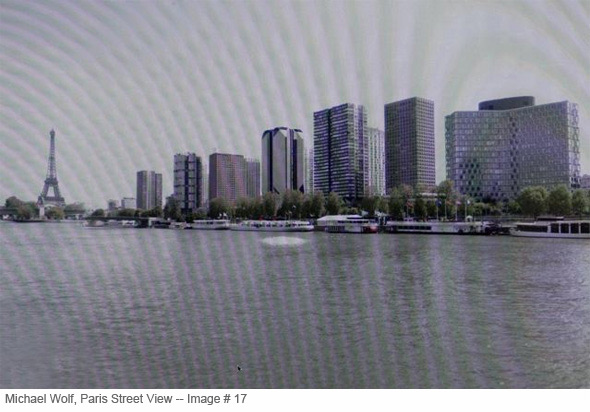 In writing about Wolf's work, Marc Feustel notes, "Paris may now be one of the hardest cities to photograph as it has changed so little over the last century.... How can you take pictures in this city without just repeating clichĂŠs or, conversely, trying to run away from its overwhelming photographic past?"

Well, one way, as Wolf's series Paris Street View shows, is to embrace the fuzziness and constraints of Google's virtual city. By working with this version of Paris, Wolf is able to question our very ability to see -- or perhaps, appreciate -- this overly familiar and largely unchanged urban landscape. On a visual level, the series poses a timely question: could it be that an over saturation of documentation actually obscures the subject in question?

On the one hand, it would appear that Wolf answers this question in the affirmative. Robbed of sharpness and taken from a fixed viewpoint (i.e. the street), Google's Street View photos -- and Wolf's photos of them -- appear to offer a fuzzy version of reality, one in which street signs might suddenly disappear and where it's difficult to figure out precisely what things mean in general. 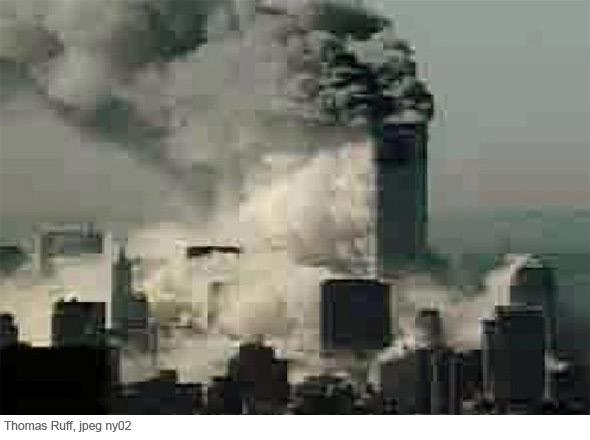 Similar to Thomas Ruff's jpeg series, the argument is that the closer we look and the more we document, the less we actually make sense of the world around us. Culled from the vast archive of images freely available for download on the internet, Ruff's massive prints of the burning World Trade Center capture this insight marvelously: from a distance, they appear clear and easy to "read" -- but the closer one gets, the more the images break apart, eventually leaving the viewer staring at a fuzzy mess of pixels with no apparent structure. Although the visual logic -- where space equals time -- could be labeled simplistic, it'd be tough to conceive of a better metaphor for the process by which we understand historical events.

And yet, despite the degree to which these series highlight the abstruse, it'd be unwise to reduce them to statements about what is sometimes referred to as the end of history. In fact, Wolf's images -- and, to a lesser extent, Ruff's "jpegs" -- capitalize on the limitations of their raw materials by offering us a novel way to engage with subject matter that's so familiar it's become banal. If one were to somehow clean them up and print them with perfect sharpness and free of noise, it's likely they'd lose all impact. 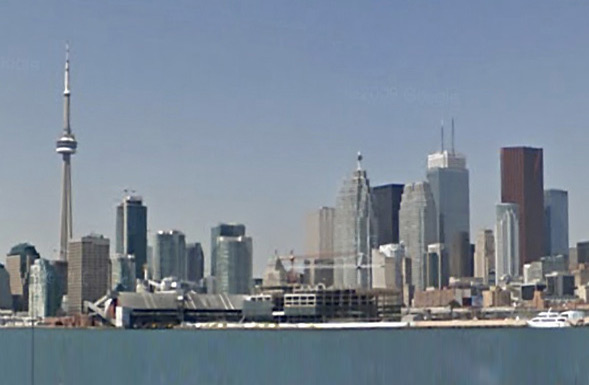 So what about Toronto? Although our city's photographic history pales when compared to Paris or New York's -- leaving artists with less reason to want to escape and/or comment upon it -- by offering the user the ability to wander through a world that seems both familiar and strange at the same time, Street View might just engender new ways of seeing the place we call home. The best art, after all, pulls the wool from our eyes, reveals something about the world that was formerly unknown to us.

But I wonder if we'll like what we see? 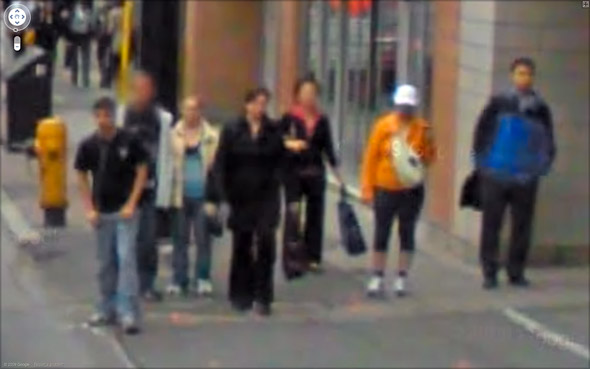 In diagnosing what might be termed the postmodern condition, Jean Baudrillard argues that our strategies of simulation can no longer be thought of as secondary or mimetic: "It is no longer a question of imitation, nor duplication, nor even parody. It is a question of substituting the signs of the real for the real." If this is true -- if the (Google) map has replaced the territory or land it was thought to chart -- then perhaps its defining characteristics have become the true marks of urban life. 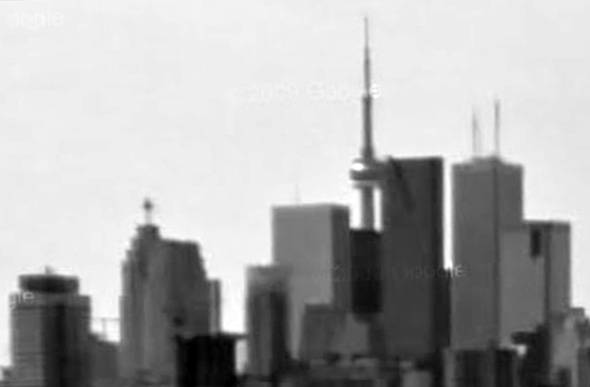 Could it be that the blurred faces and deeply embedded Google logos of Street View now actually define contemporary city life? Have the faces of our fellow citizens become truly anonymous, the guarantee of privacy deployed as the pinnacle of consumer-comfort -- a right celebrated by the very institution that violates it? And does the fabric of corporate branding that underwrites these images hint at something sinister, something more than Google's trademark? This is Toronto, yes -- but a version that's plastered with copyright watermarks. 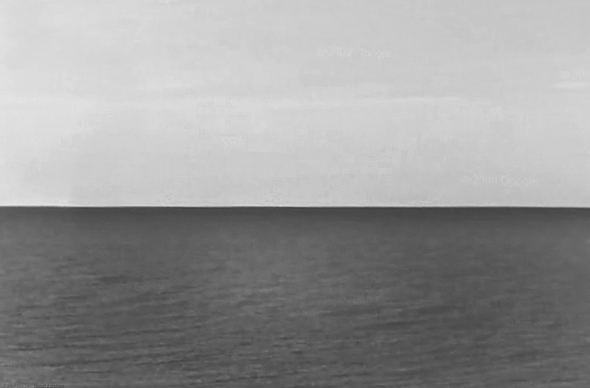 One of the eeriest qualities of these images is the degree to which they can be made to look alike. At even a moderate level of zoom, the detail in Street View images is obscured, making it difficult to establish and maintain a specific sense of place. Are we are "in" Toronto or staring at the Sea of Japan? It's not always so easy to tell without the aid of Google's labels and signage. 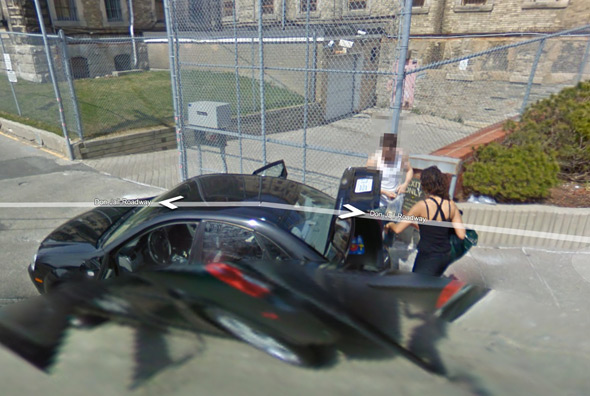 But for all the suspicion that these images may invoke, there's also a plethora of stunning scenes that inspire not fear, but appreciation. I suppose the range shouldn't be surprising given the size of Google's project, but when I stumble upon a particularly beautiful Street View capture, I'm reminded that despite the ease by which this technology can be made to reveal the homogeneity of late capitalist culture, there remains an opportunity to experience that which is mysterious. 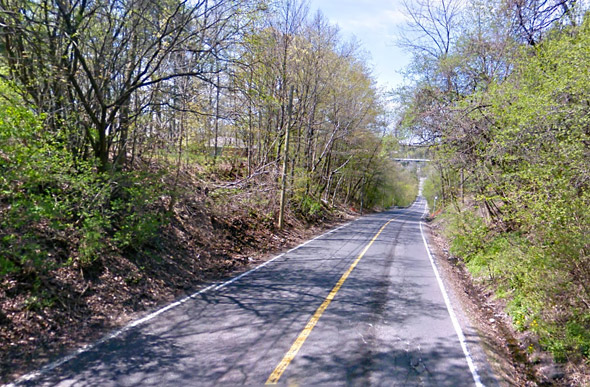 It seems that every time I write about this stuff -- any art that is unconventional in some way -- I can't help but channel the first bit of Nietzsche I ever read. In one of his less-often quoted aphorisms, he questions the relationship between knowledge and familiarity.

"What do [we] want when [we] want knowledge? Nothing more than this: Something strange is reduced to something familiar.... What is familiar means what we are used to so that we no longer marvel at it, our everyday, some rule in which we are stuck, anything at all in which we feel at home. Look, isn't our need for knowledge precisely this need for the familiar, the will to uncover under everything strange, unusual, and questionable something that no longer disturbs us? Is it not the instinct of fear that bids us to know?" 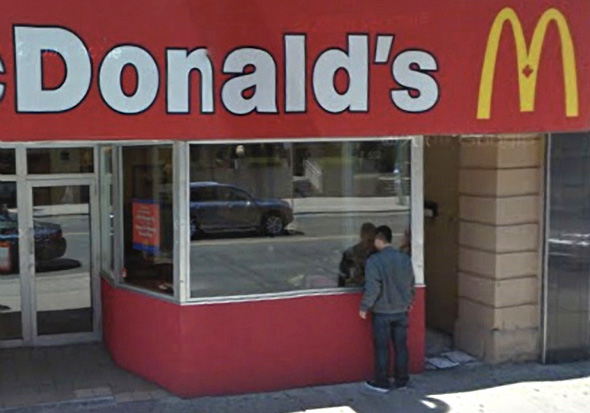 The contemporary relevance of such questions is as startling as it is profound, and ultimately gestures to the complexity of Google Street View. Here we encounter a technology that might just be the most lucid and concrete representation of our current mode of living, that might overstep its bounds as representation and/or metaphor and set the very terms by which we understand the world and our place within it. The "desert of the real" is a Toronto street.

But even in the face of this regulation, this apparent ubiquity, it remains possible to resist, to find an interstice within which we can express our individuality, our non-anonymous, non-blurred, experience of the space we occupy. 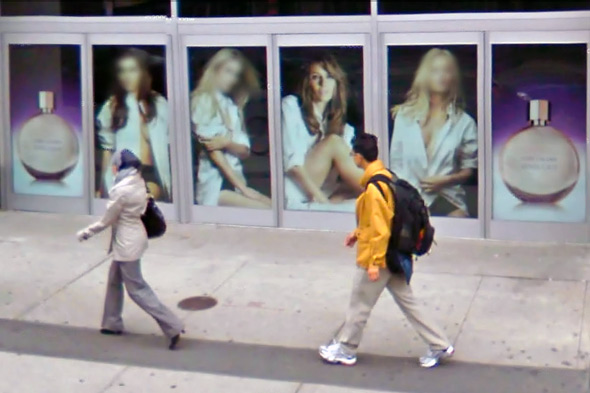 And that, to me, is the beauty of Street View art. Although the process by which the virtual world created (photographed) by Google is dispassionate and scientific, the panoramic nature of the technology allows one ample freedom to suss out intriguing subjects, change perspectives, zoom in or out -- in short, to participate in a process that's surprisingly like composing a traditional photograph. But, importantly, the resulting product is yet to have become overly familiar. For now, the images still look novel, odd even. And things that are odd tend to grasp our attention, even if only momentarily. Perhaps that's all we can ever ask of art -- some temporary shudder of discomfort that nevertheless captivates.