I Slept With Adam Giambrone

I slept with Adam Giambrone.

Well, I didn't really sleep with Adam Giambrone. But what if I did? That's the question on a lot of people's minds these days, after seeing buttons with this message worn on lapels of people around Toronto.

Since it was revealed that Giambrone had relationships with multiple partners, wearing this button might level the playing field, as it were. The buttons are the brainchild of Sonya Popovich, a production coordinator for a graphic design studio in Toronto.

"I had an outside designer do it, whom I paid for the design," says Popovich. "She gave me five options and I chose one. I had 500 made. They cost me $230 to produce. But I'm giving them away for free." 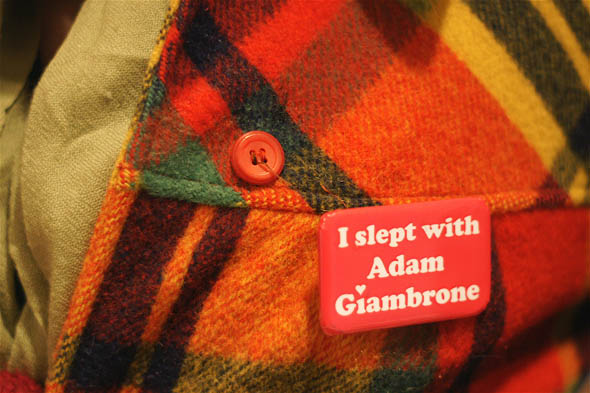 So what's the idea behind the buttons?

"If we've all slept with Adam Giambrone we all have his morals," says Popovich. "Are we all able to function with all our jobs if we all sleep around? Cause we all do it."

What prompted Popovich to make I slept with Adam Giambrone buttons in the first place?

"I come from an active political family," says Popovich. "I come from Sudbury, so I pretty much have a union mentality. I have no TV at home, but I read The Globe & Mail, which I refer to as 'the only male worth sleeping with these days.'

"What bothered me most about this whole thing is Giambrone mentioning his partner as a political prop. As a 51-year-old woman who wears glasses, I object to the fact that the plain Jane girl can't be the lusty busty one." 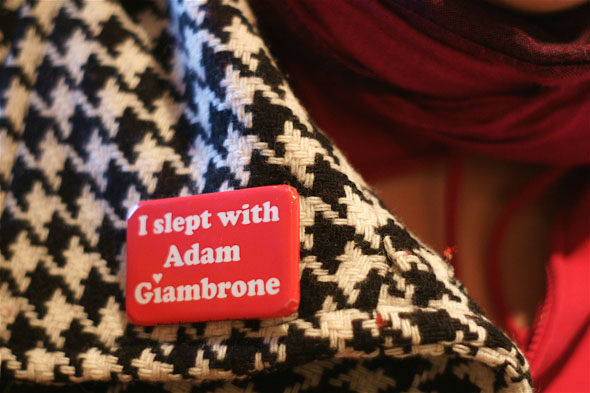 What sort of reaction has she gotten from wearing the button?

"One TTC driver told me, 'You better not be selling them on the TTC,'" says Popovich. "But then just yesterday, a female TTC streetcar driver asked me for two buttons. Some associate my buttons with sex, others associate it with the TTC."

I got a button from Popovich and pinned it to my lapel. The first comment I found was quite amusing: "That's why they call him The Red Rocket!"