Who the Hell is Gord Smith? The Most Important Canadian Artist You've Never Heard Of

Gord Smith was at the top of the Canadian art world in the late 1960s and the early 1970s. A Montreal-born sculptor who originally learned to weld with a torch his older brother used to rebuild old cars, Smith's rise to prominence was a rapid one. By the time he reached his early thirties, he had already built up an impressive list of public and private commissions, collaborated with architects like Arthur Erickson, and exhibited with such international heavyweights as Henry Moore and Barbara Hepworth.

Of the many sculptures Smith produced during this period, the most significant was surely the Canada Screen, which was commissioned by the Canadian government for its pavilion at Expo '67. A $65 000 project at the time, the finished product was a massive 110'x12' Cor-Ten steel sculpture that weighed approximately 13 tons.

By the late 1970s, however, Smith's life and work was in ruins. The Canada Screen lay in pieces in a gravel pit outside of Montreal -- removed from the Expo grounds by the same government that commissioned it -- and its creator was in the process of drinking himself to death. 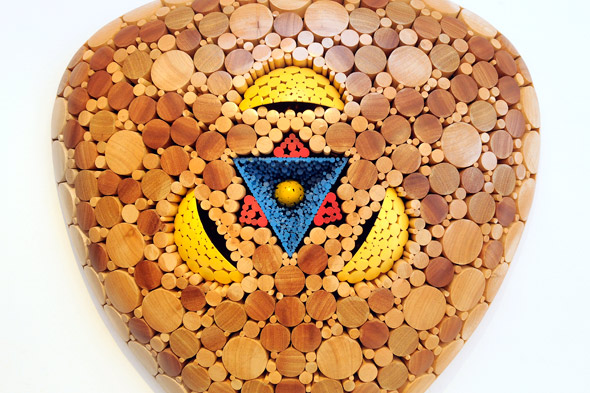 The story of Smith's ongoing 50-year career is as fascinating as it is unknown. Despite early attention and accolades, from the late 1980s to the halfway point of this decade, his work received little critical consideration and gallery exposure. Although he continued to create and exhibit, the heights of his success were very much a thing of the past. And so it is that a generation of art lovers has never seen or heard about Gord Smith's work.

I, of course, was one of these very people prior to a recent visit to Pentimento, the Leslieville gallery hosting his first solo exhibition in 20 years. Taking in Smith's work for the first time was thus something of a shock, albeit a delightful one. The quality and intricacy of his Woodworks immediately reveals a profoundly gifted artist in full command of the sculpted form. 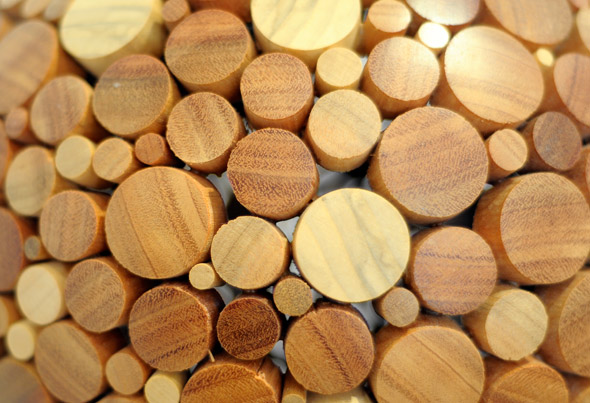 In a sort of return to his artistic roots, the wood dowels that serve as Smith's current medium are really quite a bit like the bits of scrap metal that he first started on. Found at pretty much any home renovation store, previously cut dowel can often be purchased from junk bins for dirt cheap. Having discovered these bins, Smith had something of an epiphany when he realized that he could repurpose the various pieces by combining them in sculpture.

That was about six years ago, and the discovery has led to a late-career resurgence for the 72 year-old, now Toronto-based artist. Drawing on tenets of Eastern philosophy, the geometric principle known as the Golden Ratio, and the aesthetics of Native Canadian masks, Woodworks is a thoroughgoing exploration of the complex relationship between the simple and complex, the iconic and the unknown.

Back in the late '70s, the possibility of Smith resurrecting his career was slim at best. Having left his job teaching in the Department of Visual Arts at the University of Victoria, he was drinking so much that his periods of sobriety were reduced to one or two hours a day. Although shortly removed from the height of his success, this rapid spiral downwards was already flirting with completion. Near death, friends finally convinced him to enter the Donwood Institute, a rehabilitation facility in Toronto. 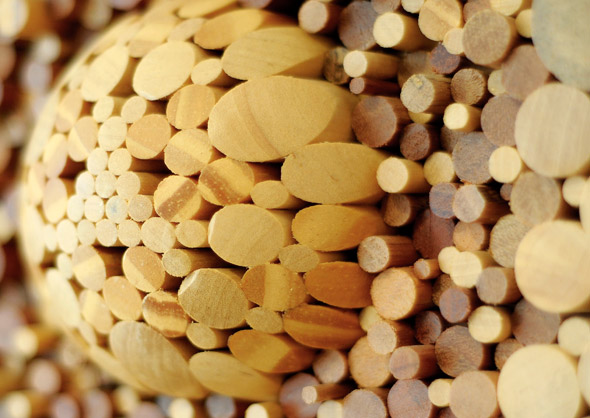 After a month-long stay, Smith had taken the first steps towards kicking his addiction, and to this day he has not relapsed. But as feel-good as this aspect of his story is, the consequences of his alcoholism were far-reaching. Despite receiving some major commissions after leaving Donwood, the latter half of the 80s saw the artist plummet into virtual obscurity.

But, true to his artistic nature, Smith continued to produce. His focus, however, had shifted markedly. The humanist themes and monumental structures that defined his earlier work were set aside in favour of a new fascination: the relationship between geometric form, consciousness and being. Inspired by Danish artist/engineer Piet Hein's combination of a cube and sphere -- known as the Super-Egg -- Smith set out to explore what he's come to call the Super-All, a combination of the tetrahedron and the sphere. 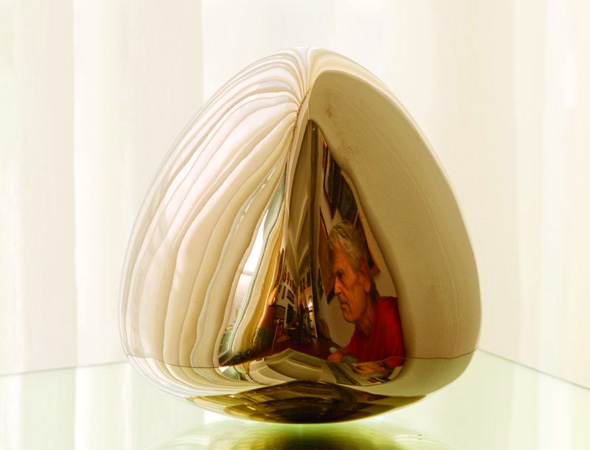 For Smith, this form has far more than aesthetic value. After years of consideration, he's come to understand the Super-All as a key to a unified mandala, a Sanskrit-derived word/concept that denotes a geometric shape or plan that represents the cosmos. Disrupting the hierarchical and dogmatic geometry of the triangle/tetrahedron, the Super-All's defining characteristic is its symbolization of the unity shared by the triptych of form, light and consciousness.

I have to admit, I'm a skeptic when it comes to New Age theories that seek to establish a unity between what I believe are disparate things, but on a symbolic level -- and as a frame of reference for interpreting sculptures that initially appear abstract -- the Super-All helps the viewer to make meaning of the formal architecture that underwrites Smith's ouevre. Take, for example, the series of Super-Alls featured in Woodworks: the arrangements of the dowels are far from arbitrary or the result of merely aesthetic considerations; each sculpture represents an aspect of this tripartite unity that Smith's work explores as a whole. 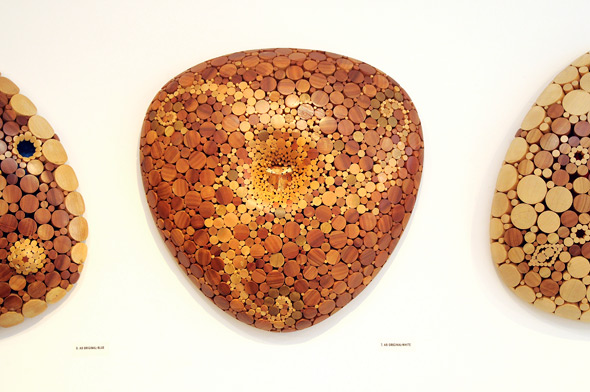 Even the pieces in the show that don't feature the Super-All hint at the philosophy that informs Smith's creative endeavour. Playing with the mathematical/geometric principle of the Golden Ratio and the Fibonacci Sequence, Smith subtly reminds the viewer of the profound (and proven) connections between our understanding of geometry and its manifestation in the natural world.

Over and above these technical features, there's also a certain "cadence" to the distribution of the dowels in Smith's sculptures that reveals their aesthetic unity. As complex as they may be on a micro level, the individual pieces ultimately combine to form a montage that gestures to an underlying purposiveness that's difficult to pinpoint or categorize. To lose the art-talk for a moment, it'd be fair to say that with Smith's sculptures, the whole is always greater than the sum of its parts. 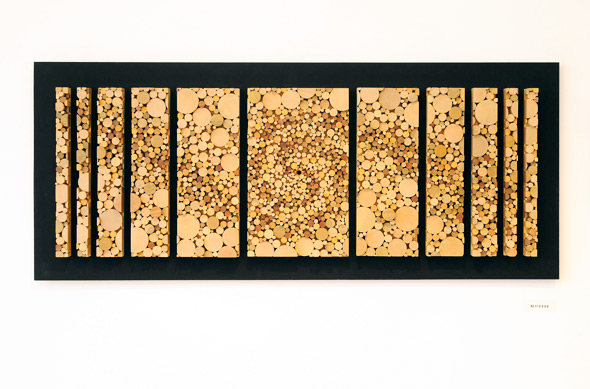 Modest in scale and certainly less expensive and prestigious a material than the steel and bronze of his early career, the Woodworks series is nevertheless a testament to Smith's perseverance and his commitment to the artistic quest he embarked on five decades ago.

With such clear-cut motifs of tragedy and redemption, it's difficult to resist interpreting his story through a romantic lens. But, the reality is that Smith has yet to re-achieve the prominence he enjoyed in the past. His resurgence lacks the spectacle and scale of a Hollywood ending.

And yet, in some way, this makes it all the more remarkable. In spite of the fact that few critics and curators showed any interest in his work for an extended period of time, he quietly kept producing, motivated by a desire to work through a set of philosophical and formal problems and by the compulsion to create in general. And perhaps, in the end, it's this silent determination that is the greatest measure of an artist.

Photo of Gord Smith's Super-All courtesy of the artist. 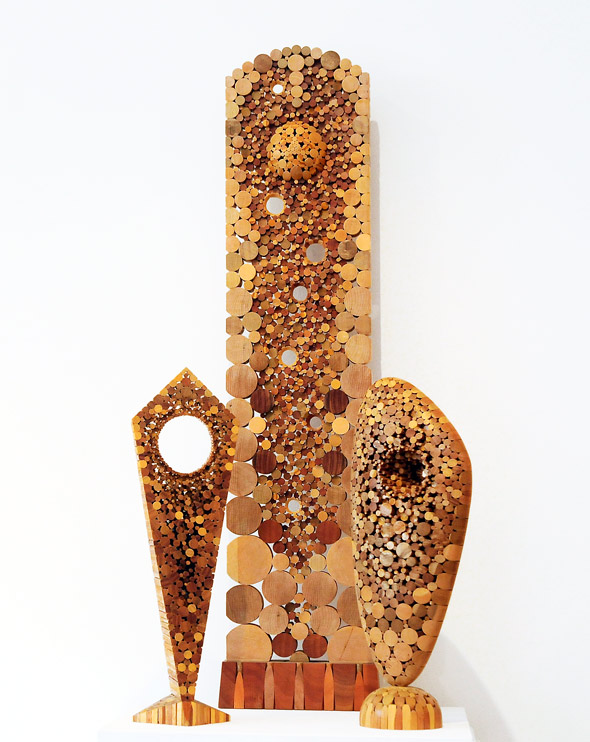