Shut Up and Show Us More Tweets!

Shut up and Show Us Your Tweets! is Second City's newest show, which takes aim at city council, social media and strangely enough, Alberta.

I attended the opening night gala on Tuesday night and was rather impressed with most of the show's content, acted out on stage by six talented sketch/improv artists: Rob Baker, Dale Boyer, Adam Cawley, Darryl Hinds, Caitlin Howden and Reid Janisse.

The Second City show started out mocking our increasing reliance on texting and tweeting in public. And even at parties. One of the musical numbers had cast members cleverly sing, "No need for the social skills I've neglected." I left the show pleasantly amused but rather starved for more tweet-worthy content. 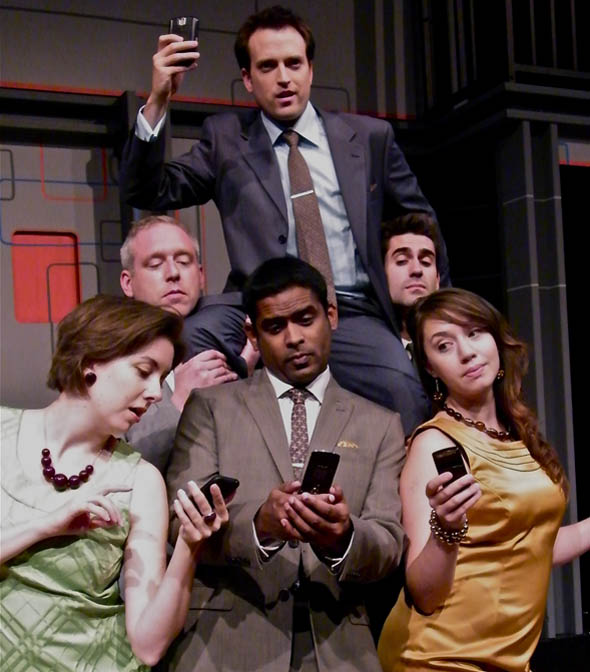 One sketch featured a couple meeting with a lawyer to write a living will. The lawyer instructed them to act out scenarios to figure out how the other partner would act facing a euthanasia decision, making an improv-within-a-sketch scenario.

Another sketch played out a long-distance romance, where a couple got to act out their fantasies over the phone for lack of face-time. This poked fun at liking your partner's mom or dad.

Even United States war resisters got the Second City treatment in this show, referencing the U.S. health care debacle while poking fun at our own medical shortcomings. "You get to go to hospital for free! It'll take a few months, but you'll get in for free."

Premier Dalton McGuinty got a grilling. And Mayor Miller too. It's a pity that Rob Baker, one of the cast who closely resembled Miller, didn't do an impersonation. Instead they relied on a static, still photo of him, displayed above the troupe as they shouted out angry epithets about his time in office. They did make a pretty neat comparison of him though, likening him to a melting Bert from Sesame Street.

Some of the material fell kind of flat, or went on much longer than necessary: The American asking for a t-shirt at H&M that had on it a mystic Indian, tie-dye and an eagle; and the good cop, bad cop sketch -- which was big on the yelling but short on witty dialogue.

There goes the neighbourhood!

By far the most memorable segment played into stereotypes, poking fun at the cultural heritage that makes up Toronto, getting funnier as the skit progressed as it tracked back to our early settlers and their impression of those who came into their neighbourhoods. 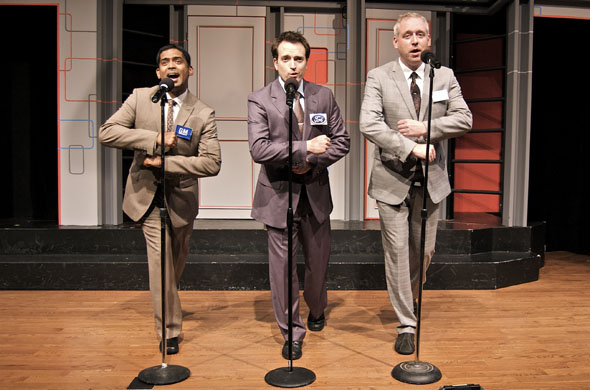 After intermission, we were treated to a clever musical number, featuring The Detroit Three, a fictitious singing trio consisting of Chrysler, GM and Ford. And the U.S. health care debate reared its ugly head again in a mock town hall meeting, with questions planted amongst audience members.

Hinds was fun to watch impersonating an Indian Dell Technical Support worker getting a thrill as a caller got more and more frustrated. Not so funny were the sketches about a Learning Annex French lesson, which descended into Alberta taking over Canada. And the reenacted party scene where a couple accidentally drops a baby, which seemed over-the-top and rather far fetched for my enjoyment.

My favourite act in this show, directed by Sandy Jobin-Bevans and produced by Klaus Schuller, was one that contained no dialogue. A scene played out in silence, save for all the beeping devices that go on in one man's household. Well timed and brilliantly executed. Considering the show's title, I had expected more high-tech hilarity in the show's content.

The cleverest line delivered all night poked fun at our five-cents-a-bag policy. But I won't ruin the punchline. Go see the show yourself and send me a tweet if you agree.