I spent my Nuit Blanche in Zone C, starting in Liberty Village and making my way along West Queen West from Dufferin St. to just east of Ossington Ave. Here's a look at what impressed me most along the way.

The most memorable moment for me came in front of a busy Queen West sidewalk near The Drake Hotel. An elaborately dressed woman was enticing passersby to create their own award for themselves or someone else.

After wandering into several art galleries along the strip that smelled of freshly painted work, I awarded my Nuit Blanche companion the Sexiest Sneezer Award. She was led to a podium, where she stood, got sprinkled with sparkles and received the award, complete with a stamped certificate of authentication. Brilliant. But is it art? 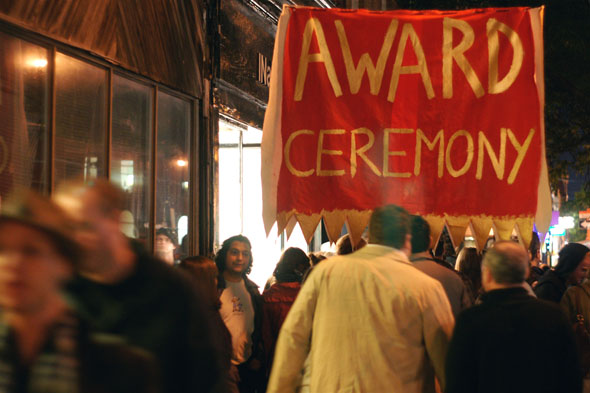 A little further down Queen St. a crowd was gathered outside 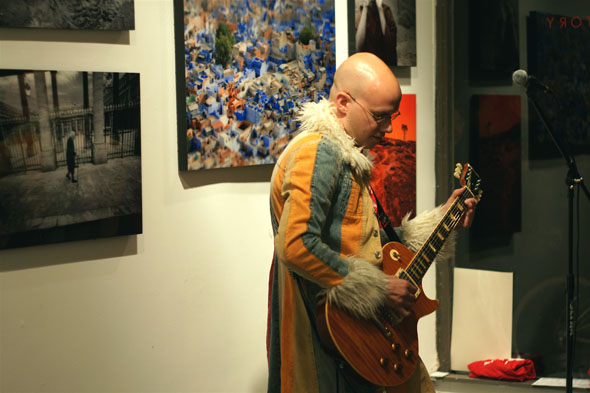 Lens Factory, where a couple of shaved-head dudes were causing quite the attraction.

One in each window, armed with either an electric guitar or some flashy dance moves. It may have been just an elaborate ploy to get more people inside the photography art studio. 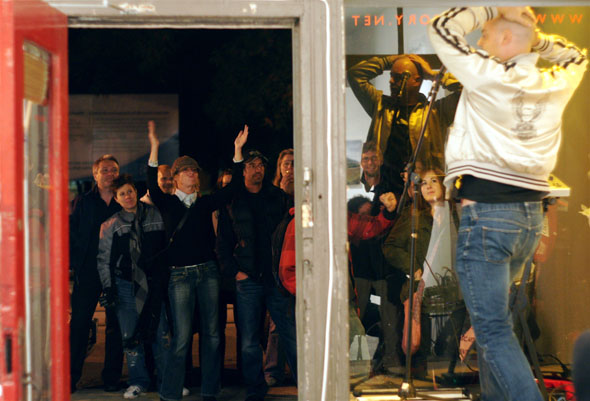 That makes two eye-catching art-inspired happenings probably not in the official Scotiabank Nuit Blanche program. It's this spirit of contemporary art that made my night.

As we wandered around Liberty Village earlier in the evening, we stopped at exhibits and installations that caught our attention or imagination. 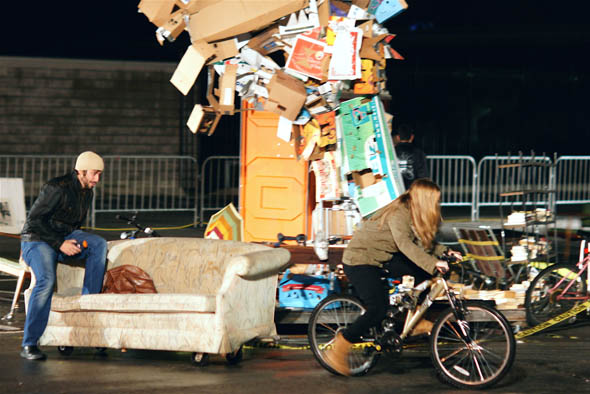 The first to do so was an interactive mobile installation called 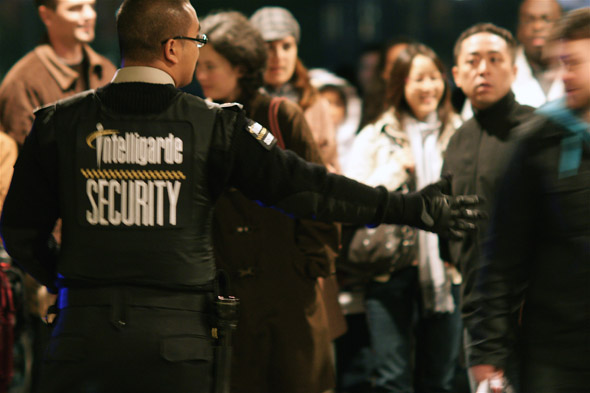 BICITYCLE (Bike City) by Kyohei Sakaguchi. The intent wasn't all that apparent, but it sure was fun watching people try to pedal around a track hauling sofas, beds and mini houses on wheels.

Next was a performance art piece called 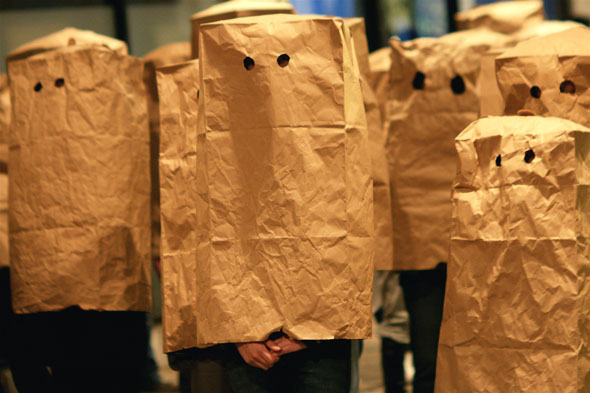 The Apology Project by Maria Legault. We were among a large group of people held back by a couple of rent-a-cops doing crowd control in front of the Liberty Market Building Atrium Corridor, where a cluster of 55 people wearing large, brown paper bags awaited us.

As we passed through them, they peered out through cut-outs for eyes to tell us "I'm sorry!" over and over again until we emerged on the other side of the hallway. Quite surreal. And so typically Canadian: apologizing for the slightest inconvenience.

The next art piece kind of took me by surprise. Oswaldo Macia's Surrounded in Tears sound installation is a collaboration with composer Michael Nyman and designer Jasper Morrison. Huge, metallic bell-like structures hung from overhead. When we stood underneath each one, we heard a different cry, from children's shrieks to old women's wails. Wonderfully eerie. 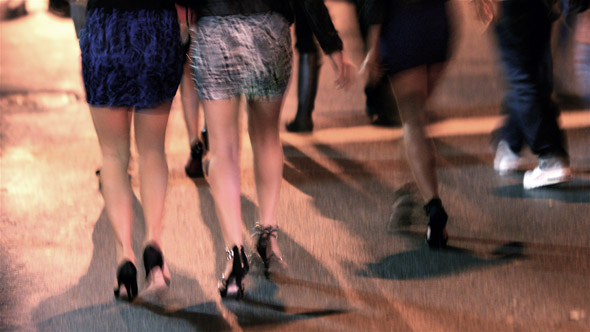 Making our way back towards Lamport Stadium, I heard a clatter of heels and spotted a bunch of young women in miniskirts, hurriedly skittering across our path. "Who would dress so inappropriately for Nuit Blanche" I thought. "Maybe they were a part of an exhibit?" Turns out they weren't there for the art at all, but to go to Maro to dance.

Taking up a large part of the south parking lot of the Metro grocery store, Take Shelter, created by the One Off Collective, was another installation that allowed people to interact with the art. Piles of canned food and cardboard boxes lay scattered about, which participants were invited to build and rebuild throughout the night. 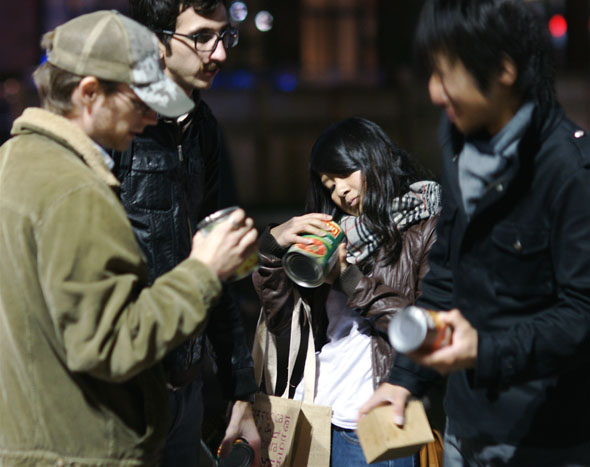 Some who seriously looked like they didn't need it took home some canned food. Others created elaborate structures, leaving behind intricately structured contributions that would later be given to food shelters. 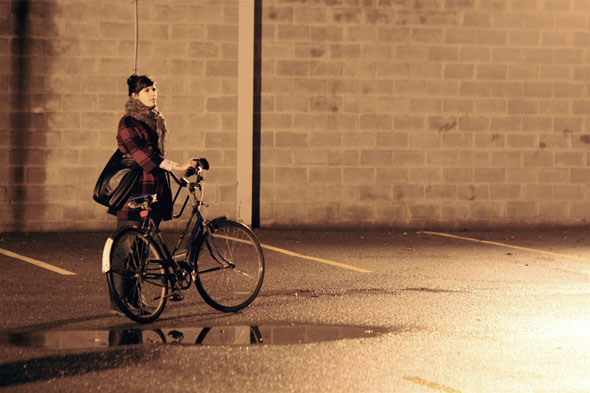 As our time in Liberty Village neared its end, we fittingly stumbled upon an installation in the parking lot at Liberty St. and Dufferin Ave. THE END IS NEAR HERE IS NEAR THE END, by Jason de Haan and Scott Rogers, filled the empty lot with emptiness.

It was a surreal moment, as many fellow Nuit Blanche participants either totally missed the message or stopped in the large, empty space, illuminated by the full moon, trying to figure it out. 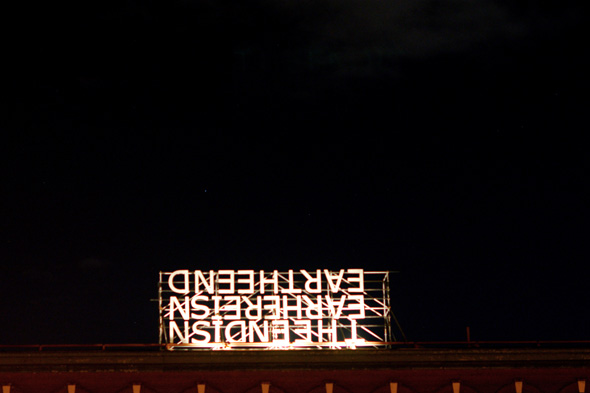 Lead photo by bigdaddyhame on Flickr.
Writing and other photos by Roger Cullman.

Got photos of Zone C? Please add them to the blogTO Flickr pool with the tag: nuitblanche2009zoneC and they'll appear here: