Art Agenda: Beautiful Fictions at the AGO, Bob Partington at the Department, Pop Up Shop and Music Videos at 107 Shaw, RISE Charity Auction

With Nuit Blanche still occupying Toronto's artistic consciousness, I contemplated the usefulness of compiling an art agenda this week. But, after a little thought, I realized that it's quite possible that gallery shows around the city might benefit from the increased artistic enthusiasm the all-night art fest brings to town every year.

Sure these shows differ considerably from the primarily installation-based exhibits at Nuit Blanche, but that's not to say that they're all boring or conventional. On the contrary, these days it's easy to find galleries doing more than just hanging paintings on walls (which isn't necessarily a bad thing either!).

Beautiful Fictions at the AGO
This is a significant exhibit that's flown a bit under the radar. Featuring works from the David and Vivian Campbell collection, this is one of the finest displays of fine art photography to come to Toronto outside of MOCCA's annual exhibit in conjunction with the CONTACT festival. Indeed, I've been waiting a long time to see works from such internationally recognized photographers as Andreas Gursky, Candida Hofer, and Thomas Struth in a local setting. Split into two main sections, the exhibit also features works by Jeff Wall, Cindy Sherman, Michael Snow and three fantastic (short) films by Mark Lewis. 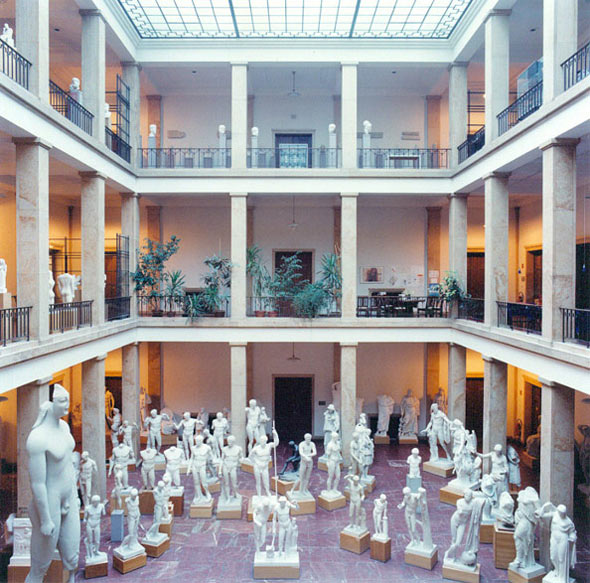 The works featured here provide an excellent sample of the themes and trends that have dominated fine art photography for the last 30 or so years. There's even a typology from Bernd and Hilla Becher that (along with Michael Snow's piece) acts as a sort of starting point from which to contextualize the other works in the show. Particularly stunning for me are the works from Gursky (from his Pyongyang series) and Ruff (a stunning example from his collection of JPEGs featuring the World Trade Centre).

The good news for photography lovers is that the show is on long run until January, and that the Campbell's have generously donated ten of the works on display to the AGO's permanent collection.

Bob Partington, "Word to Your Mother" at the Department 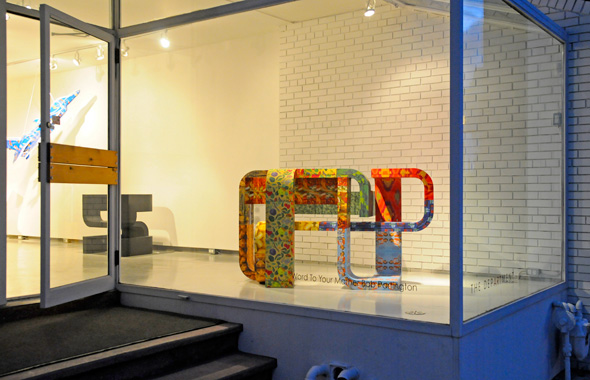 Running until October 24th, this show features works fashioned out of an intriguing mix of polyester resin and cocktail napkins. Both playful and complex, a number of the sculptures depict words in three-dimensional space. Difficult to read at first, after a little perceptive effort, the sculptures inevitably reveal the conventional signifier upon which the shape is built. In speaking with Partington about these pieces, he explained that these linguistic works hint at "the flexibility of language and the weight [it] carries." 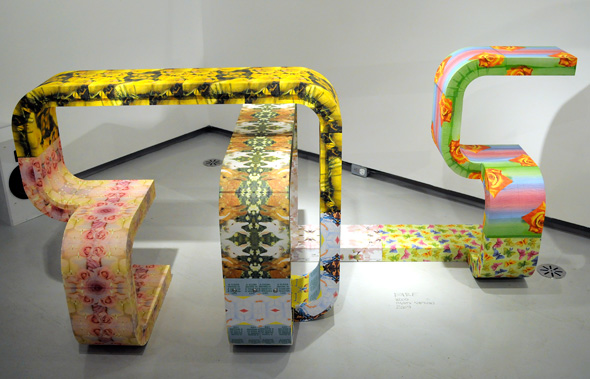 This is an easy exhibit to move through too quickly, and for me it was only on my second go around that I started to "get it." And, of course, it helped to have the artist offer his own view of the pieces. Sculpture is always difficult for me to make a (fixed) meaning of, so I particularly valued this explanation: "I started into drawing the words in three dimensions, approaching it like one might build a machine, with a flow of energy from beginning to end. A word is good, because it can't be embellished upon. I simply have to find a method to move through it."

Show & Tell's Pop Up Print Shop and "They Make Music Videos, Don't They?" both at 107 Shaw
In the last couple weeks, there's been two exciting openings/events at 107 Shaw. The most recent of these, perhaps somewhat confusingly, is actually courtesy of Show & Tell Gallery. The Pop Up Print shop is something we need more of: fair priced works (think around $50) by artists on the rise. Most, of course, can't afford to purchase original artwork that often, but many of these prints -- due to the process by which they're made -- are unique in some way, or at a minimum signed and numbered. I'm aware that this reads like a bit of a plug, but the truth is I find it constantly disappointing that artwork at even the smallest and newest of galleries is still regularly overpriced, so it's refreshing to see Simon Cole (Show & Tell) and Daniel Fazio (107 Shaw) get together on a good idea like this one. 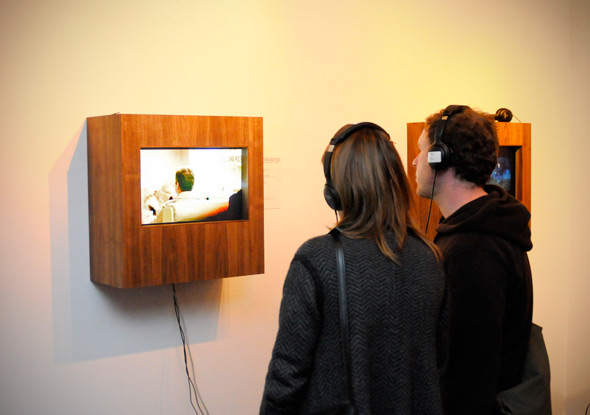 Also taking place at 107 Shaw (on a bi-monthly basis) is the "They Make Music Videos, Don't They" series, which I caught the last installment of. Curated by Scott Cudmore, the gallery space is transformed into something of a screening room. By offering individual viewing screens with headphones (in addition to one main screen), the point of this series is to force the viewer to engage with music videos in concerted and active way, much different from how one might watch them in his/her home. I've always thought the key to activating people's artistic and critical faculties is to shake them out of their routine, to make them ever so slightly uncomfortable. In this case, even the mere act of standing and having music channeled directly into the ears while watching a television affixed to a gallery wall, strikes me as enough to foster an attentive reaction from the viewer. For me it's less a question of whether or not music videos are art (they generally are) and more about creating a situation in which the viewer is asked to engage with them on these terms. 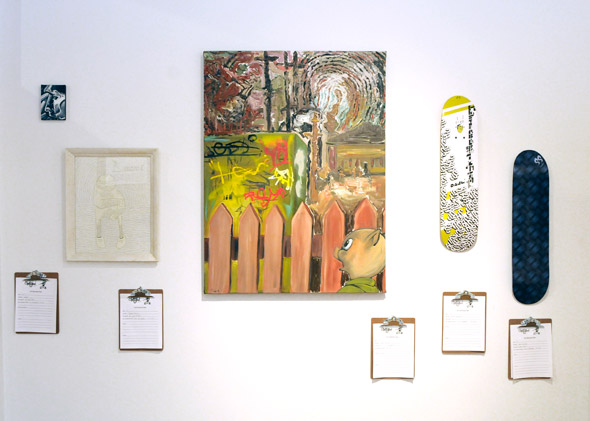 Well and Good hosted its 2nd annual art auction to benefit at-risk youth in Toronto as part of both the Manifesto festival and Nuit Blanche on October 3rd. The silent auction featured many talented local and American artists, a number of whose work I've had the chance to check out in the last year or so. With low starting bids on many pieces, it was also an excellent opportunity for the aspiring art collector - or an arts appreciator in general - to acquire original work at reasonable prices and for a good cause. The second and third floors at 52 McCaul, where the event took place, were also part of the Nuit Blanche festivities, and featured some pretty cool installation work. 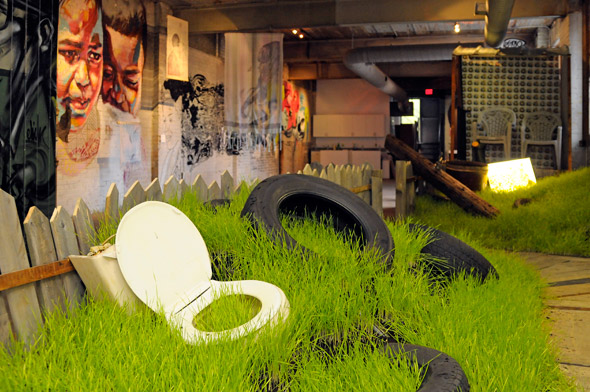 I know the event has already taken place, but I find space to mention it here because I hope to draw attention to the work that Steve Ferrara and Lisa Martin are doing at Well and Good. A lot of the charitable art events that I've attended in and around the city have featured pretty a limited selection of artwork and/or unknown artists. With this event, however, this was certainly not the case. I'm excited to see what they have coming up, so stay tuned for more coverage of events hosted by Well and Good.

Second photo by Candida Hofer, currently on display at the AGO.

For information on the run-times of the above shows, please visit the gallery websites.