Nuit Blanche is set to take over Toronto next Saturday October 3rd offering another dusk 'till dawn city-wide art crawl and an excellent excuse to stay up crazy late. To make the most of the evening, I've put together a guide with some of my top picks for this year's installment of the all night contemporary art thing.

The map below shows a selection of exhibits I'm planning to check out at the 2009 installment of Nuit Blanche. The complete list of exhibits is available at the official website and of course via the new mobile apps. The map also contains descriptions of each exhibit and links to further details, so hopefully it's a useful tool to help you plan how to make the most of your night.

In my experience, the best exhibits are the ones you have to hunt for - less people find them, and there's an element of discovery that makes the night all the more enjoyable. You can also voice your opinion of the exhibits this year via the People's Choice Award, where you can vote for your favourite installation project.

As always, the event goes from sunset to sunrise with many places around Toronto staying open to accommodate the all night affair (we'll have a Nuit Blanche food guide coming this week, too!)

The TTC is running all night, but only in certain areas. The Bloor-Danforth subway (from Keele to Woodbine) and the Yonge-University subway (from St Clair West to Eglinton) will run 24-hours. Don't forget that the rest of the TTC won't start up until 9am on Sunday morning... however increased all-night service will be offered on some land routes.

So without further ado... here are my picks for this year's Nuit Blanche: 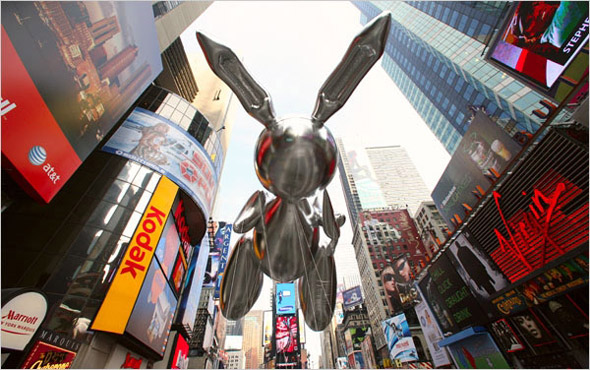 This zone includes 52 official and 37 independent exhibits this year, and covers a massive patch of city from St. Clair down to Queen. A lot of these exhibits tend to cater to large crowds, but some run on a show-type schedule.

Rabbit Balloon
Jeff Koons - Sculpture
Mr. Koons has said of this most iconic work that it reflects the needs of culture and society and can represent so many different things to the viewer.

Space Becomes The Instrument
Gordon Monahan - Sound Installation
This installation and performance inverts traditional staging by using the audience seating area and the balconies as the performance space. From the stage, the audience will view performers playing piano wires stretched across the interior of Massey Hall.

AS COULD BE
Paulette Phillips - Installation
AS COULD BE is a three dimensional animation projected onto fog and an immersive sound piece. The animation is based on the architectural model designed by the Russian artist Vladmir Tatlin.

Pwn the Wall
Graffiti Research Lab - Multimedia Installation
Nuit Blanche will premiere "bombIR" - an infrared-LED equipped spray can that allows writers to physically paint with light. Local graf artists will reference 1930"s era agit-prop images from social movements in Toronto during the depression era. GRL Canada develops open source projects in collaboration with a team including Rhek, Virus, and The Dark in Vancouver, as well as Fluke and Axe in Montreal.

Mobius
Jason Leaver - Video Installation
Mobius is a looping film with no beginning nor end. Presented on four screens facing each other, each delayed by 25%. Key elements of the story temporally interact with one and other, screen to screen as past and future events intersect.

On the music side of things, check out the Reference Library's Dance Dance Evolution, or The Rivoli's All Vinyl Cavalcade (upstairs) that's paired with Zone B's Eros Boulevard Cabaret (front Patio).

This zone includes 42 official and 27 independent exhibits spread across the south central area of the city, as well as the Distillery District.

Skry-Pod
FASTWรRMS - Performance Art, Multimedia Installation
Skry-Pod transforms the Sheraton's lobby and normally inaccessible gardens into a zone of divinatory encounters. Tarot readings activated through iTouch, a live tableaux in the glassed-in waterfall, and a VJ mix of the artists' aesthetic meditations on popular culture, natural cycles, and occult philosophy will continue through the night.

Vodka Pool
Dan Mihaltianu - Installation
As viewers gather around a reflecting pool of alcohol situated on the pristine floor of the atrium, they can ponder the volatile and symbolic qualities of 80-proof vodka.

Gone Indian
Rebecca Belmore - Performance Art
Roaming the downtown district is the nomadic presence of an artistically rezzed-up pickup truck. Decked out in "traditional" pow-wow regalia, the truck features drumming and vocals, and a dancer who erupts into action at unsuspecting moments.

Safe as Houses
Adrian Gรถllner - Light Installation
The expression "safe as houses" refers to the permanence and protection of one's home. As a way of playing with this notion, a residential tower will be treated with light, making it appear impermanent by night.

12 Hours of Power
Denise Ing - Installation, Performance Art
On the night of October 3, Torontonians will flock to Berczy Park... Beckoned over by Live Green Toronto volunteers, the Nuit Blanche attendees will mount the bicycles and naturally start pedalling. Right before their eyes, the fountain will light up and an altered water display will rise from the water's surface.

PhotoSecret
Rob Gee - Interactive Installation
Embracing "the exhibitionist in all of us", PhotoSecret is an interactive exhibit that encourages visitors to anonymously txt a secret with their mobile phone. The more adventurous can take their photo at one of the custom photo booths. The crowd will come alive when photo and secret are randomly paired and displayed above the city for all to see.

HEY APATHY! "A Dialogue with the City"
Mike Parsons - visual/performance art
Witness the live and interactive creation of a giant mural in the streets of Toronto. The city is a giant gear, propelled by all the different people who move through it. Mike Parsons is a fine artist/performer who uses black & white cartoon images to express an optimistic warning towards the future. 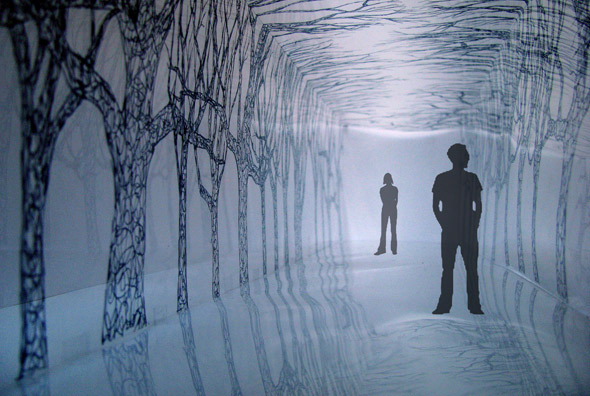 This zone was by far my favourite last year, offering a nice balance of crowds and room to explore each exhibit at my leisure. With 36 official and 26 independent projects, not to mention some of the city's best venues for late night fun, I'll probably spend a good chunk of the night checking out these exhibits.

The Sight of Sound
The Sight of Sound: Scotiabank Nuit Blanche at Drake
Twitter meets contemporary art called Urban Echo. People walking by the Drake will see phrases projected onto the faรงade of the building that they will be asked to respond to via Twitter or text messaging. The person's response will then get re-projected back onto the building for all to see - a collective representation of thoughts and feelings of urban dwellers.

The Apology Project
Maria Legault - Performance Art
For Nuit Blanche 2009, The Apology Project will be staged in its largest scale thus far. A cluster of 55 people wearing large brown paper bags on their bodies will congest a public hallway and personally apologize to every person who ventures through them.

In Position!
Babak Golkar - Light Installation
In Position! Babak Golkar projects a stream of pulsating light from various searchlights into the sky. While the locations of the searchlights vary, the pulsation will stay constant, spelling out the words "WE ARE SORRY" in Morse Code. With this installation Golkar aims to create a visual sense of anxiety and emergency.

Dance of the Cranes
Brandon Vickerd - Performance Art
Dance of the Cranes is a collaborative performance piece consisting of a 13-minute choreographed dance performed by two high-rise construction cranes. The dance will be performed at the beginning of every hour, from 7 pm to 3 am, on the night of Nuit Blanche.

The Lost and Found Forest
Sculpture, Multimedia Installation
Enter and explore this man-made forest of string, interwoven around thousands of nails along a 40-foot long plastic corridor. The sounds of the forest are also present, familiar but manufactured.

Rescue Bubble
Tomer Diamant - Sculpture
As the humble foot soldiers of disposable infrastructure, traffic pylons solicit an indifferent compliance in our daily navigations of the city. Here however, hundreds are amassed into a single glowing beacon of urgent concern.

NITE LITE
Alexandra (Alita) Gonzรกlez - Light Installation
NITE-LITE is a free-standing light installation which uses re-purposed materials and water bottles, stained and lit to act as 'pixels', which create visuals as well as awareness to the environmental issues surrounding plastics and BPA.

A.R.R.R.T (Artistically, Recycling, Reusing, Reclaiming, Twilight)
The Evolution of The Human Spirit - The sheVISIONS Collective
This contemporary art piece focuses on Light and is supported by a combination of sound, movement, and visual and costume design. ...3D visual projections are eased on to the west faรงade of the Gladstone Hotel, enhanced by sounds from both nature and industry. The complete installation has a running time of 1 hour and 40 minutes. There is a 20 minute intermission in between performances.

City Sonic:The Cameron House in Motion
Performance Art, Multimedia Installation
The walls of the Cameron House come to life with a video installation and Napoleon Brousseau's "restoration performance" of the ants that adorn the bar's exterior.

Finally, there are a couple events happening city-wide that you'll probably experience at some point during the evening. Newmindspace is back with their Renegade Parade 2009 and our beloved CN Tower is being incorporated into the Bright Lights, Big City installation.

There's bound to be a lot more contemporary art craziness to behold, but hopefully this guide helps to get the night started. If you take a camera with you, please consider adding some photos to the blogTO Flickr pool!