Gallery openings in Toronto have drastically increased as summer vacation has ended and nighttime temperatures hint at the coming of fall. And it seems the quality of the shows is on the rise too. Perhaps, gallery directors and curators save some of their best stuff for fall. Or maybe it's just that I'm more engaged at this time of the year, what with the traditional return to school and all.

This week included the Junction Arts Festival and four gallery shows on my art agenda. 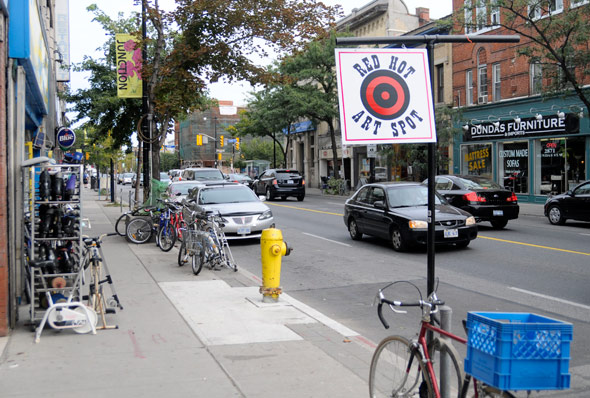 Although I drive through the Junction on a daily basis, it's a rare occasion that I visit the area for the purpose of gallery going. This is, of course, somewhat foolish because slowly but surely an arts scene is popping up in this neighbourhood. And to help foster and accelerate its growth is the annual Junction Arts Festival, which last year attracted 200 000 visitors.

The 's' in the 'arts' of the title is important, as the focus is on breadth rather than any one given discipline. Featuring live music throughout the weekend - Jason Collett was a definite hit - and numerous street performances, the festival does still include its fair share of visual art. 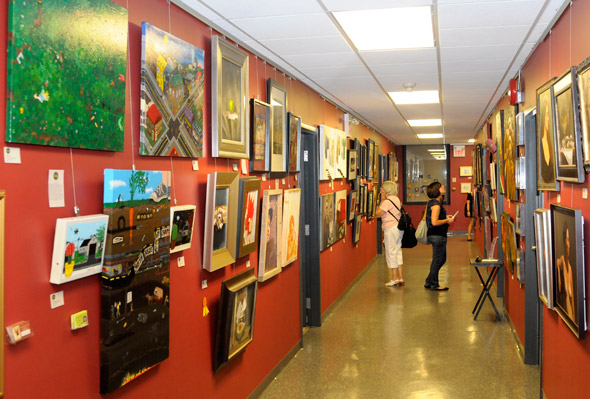 The most concentrated presentation of painting and photography at the festival is the juried art exhibition at the Academy of Realist Art. A quick stroll through its halls reveals what is often the case with juried shows: there's a profound range of talent on display, from the not so good to the highly accomplished. For some reason, I really enjoy this type of thing - something about it feels very democratic - despite the fact that much of the art isn't particularly challenging or overly philosophical. Perhaps it's as simple as the pleasure that's derived from seeing so many different creations in one space. 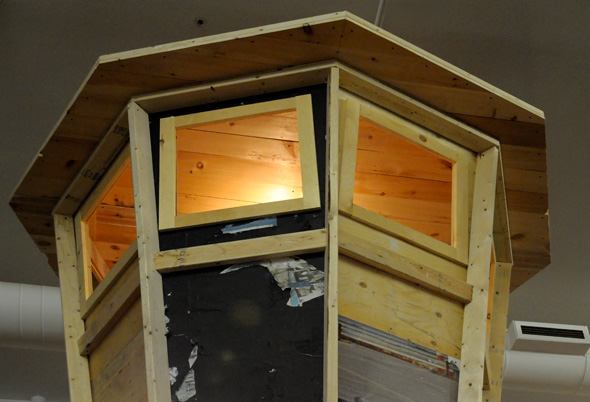 Alternately playful and vaguely terrifying, Cedric Bomford's installation at the Red Bull offices and project space recalls both the childlike act of 'fort' building and the architecture found in landscapes defined by war or institutionalized surveillance. Using found materials and operating within the specific constraints of the exhibition space, Bomford's Tower Block is very much about seeing and being seen. 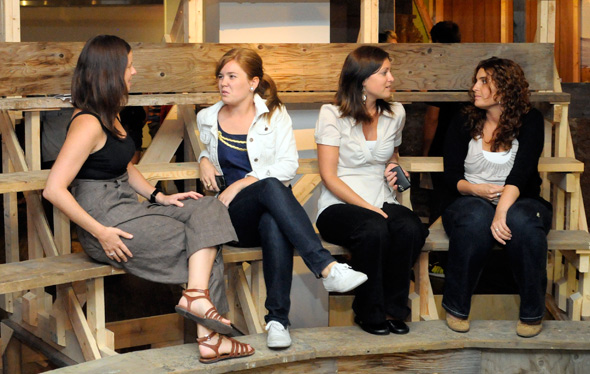 The main piece of the installation features a watchtower that visitors can climb up and then use to gaze down at the rest of the gallery, but what they're sure to see immediately below them is a wood grandstand that faces the structure upon which they're standing. Although not equal - those occupying the tower are seemingly in a position of power over those in the grandstand- the direct specular relationship between the two, and the fact that the grandstand accommodates a crowd of people (rather than the one or two of the watch tower), recalls Michel Foucault's use of the panopticon as a key allegory for the degree to which surveillance-based societies foster self-discipline on the presumption (or fear) of always being watched.

Particularly interesting in this capacity is the way that such a structure draws gallery goers into contact with one another. Instead of being able to fix one's gaze on the walls, the installation forces a more pronounced spectatorship, one in which the viewer cannot help but become part of the exhibition (the viewed). 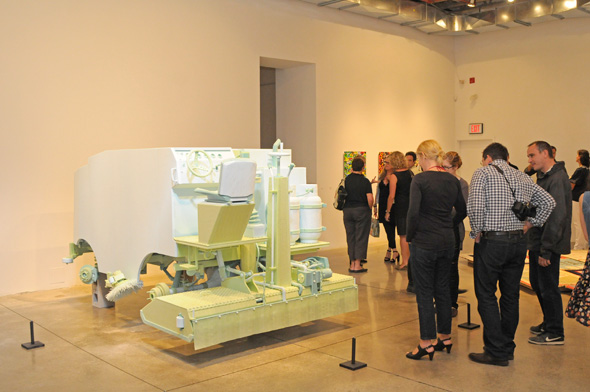 When I first heard that MOCCA would be hosting an exhibition devoted to Canada's national pastime, I cringed. What were the odds that the show wouldn't be kitschy, boring and an exercise in the 'art' of clichĂŠ?

Originally held in a larger capacity at the Art Gallery of Nova Scotia, the exhibition has overcome the odds, whatever they were. This is a critical, exploratory, and yes - often playful, examination of the game that so defines Canadian culture and identity (at least historically speaking). The mixed media offerings (including photography, sculpture, video, and combinations of the latter two) are a testament to the curator's understanding that an exhibit like this needs to function a bit like what one would find in a museum (or the Hockey Hall of Fame, as the case may be), showing off different aspects of and perspectives on the game. 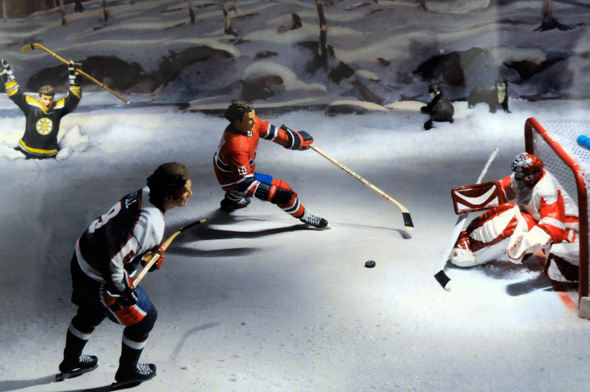 A notably strong thread here is the consideration of the degree to which the construction of Canadian male identity is tied to the near-mythological status that's been conferred upon hockey heroes. Indeed, a current that runs throughout the show is the desire to demonstrate the impossibility of cordoning hockey off into the separate sphere of sport, the result being a show in which apparent oppositions like art/sport, humour/seriousness, and heroism/frivolity collide with one another, leading to a disruption reminiscent of a Scott Stevens body check (cool link). 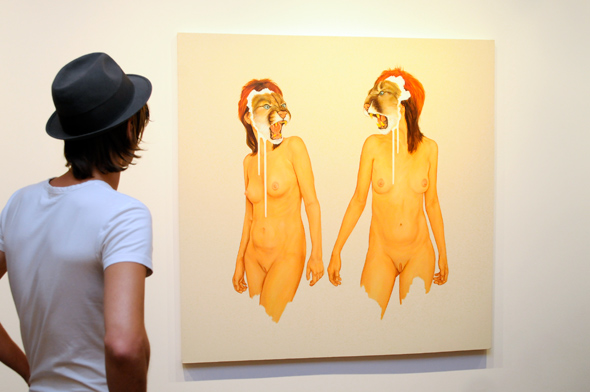 I worry that I write up shows at Show & Tell and LE Gallery too often, but the reality is these two Dundas West galleries continually host provocative and engaging exhibitions, and when they're both having openings on the same night, I find it tough not to drop by.

With Brian Donnelly's latest show, Blasphemies, Monstrosities and Other Perversions, Simon Cole (the gallery owner) keeps up the good work of showing the range and talent of lowbrow artists. By depicting human figures that seem to morph into animals as a result of heightened passion and/or aggression, Donnelly provides an intriguing take on violence and sexuality, and underscores the degree to which we're ruled by certain animalistic urges that are profoundly difficult to control, and more importantly, to understand. 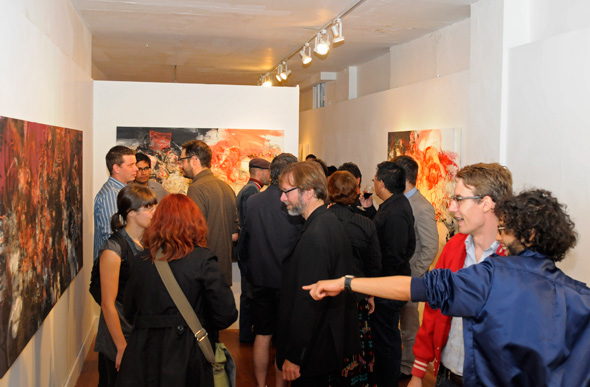 Over at LE Gallery, owner Wil Kucey joked with me that there was quite the competition going on between the two shows as both Donnelly and Pretti had attended OCAD together. Interestingly, I found that there was a definite thread that tied the two shows together, just not a formal one. For me, Pretti's canvases tend to depict emotional landscapes in much the same way that famous works of abstract expressionism privilege the internal over the external. I'm not saying these are contemporary examples of this movement, but that there's a preoccupation in these works with charting the breadth and complexity that lies beneath the surface (hence the connection to Donnelly's work).

Formally speaking these mixed media works (oil, pastel, acrylic, and graphite make appearances) strike me as both abstract and not. I hate to be redundant, but when I look at them, this issue of surface and depth reappears, with human forms tending to rise into my field of vision. And once I have the intimation of having seen a body (or bodies), I can't help but read the rest of the painting as dramatization of his/her/their psychological state.

For information of the run-times of the above shows, please visit the gallery websites.